With 59 seconds left in the third quarter, Daniel Sams planted his back foot on the Michigan 37 yard line and delivered a perfectly calibrated bomb into the waiting arms of Tyler Lockett. The only problem was, Lockett’s arms forgot to catch the ball. On the next play, Sams took the snap from shotgun, stutter-stepped, then cut left through a small hole in the Wolverine defensive line for a three yard gain. This time it was Sams’ arms that forgot to hang on to the ball. Michigan recovered the fumble.

These two things were just about the only things that went wrong for Kansas State in the 2013 Buffalo Wild Wings Bowl.

The “experts” (including all of the members of our fine BOTC staff) expected this game to be rather close. If you watched any other bowls on ESPN in the week leading up to the game, you might have noticed the bottom line displaying that “Kansas State is expected to win by an average of 1 point.”

When the game actually began, it was never really in doubt. 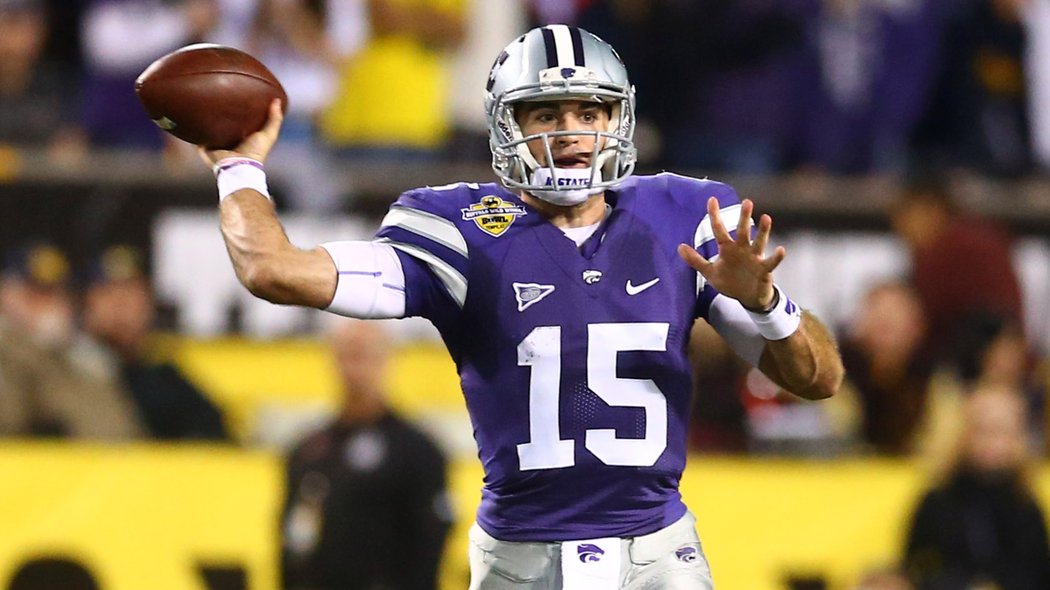 Jake Waters to Tyler Lockett was the story for the offense in this one. Despite all evidence to the contrary leading up to the game, the mighty Michigan Wolverines had no answer for the Wildcats dynamic passing duo. Waters found Lockett 10 times for 116 yards and three scores. Six other Wildcat receivers caught passes from Waters as well, who finished the game completing 78 percent of his passes and averaging a 10 yards per attempt.

The offensive line blocked perhaps better than they have all year in the passing game, giving Waters plenty of time to work. The few times the protection did break down, Jake was able to show his athleticism and escape the pocket, most notably on the first drive of the game on a third and 10 when he evaded pressure and took off for 21 yards to set up the first touchdown.

It’s hard to argue this being Waters’ best game of the season. His composure and decision making were spot on all game. He protected the football and did everything he could to lead the offense down the field time after time against what was expected to be a pretty great Michigan defense. If not for a few drops by Tramaine Thompson, Waters might have touched 80 percent completions and 300 yards through the air. Excluding sacks, he average 5.3 yards per carry with his legs. He was on fire.

John Hubert finished his final game with 80 yards rushing, easily eclipsing his season goal of 1,000 for the first time but coming just seven yards shy of 3,000 for his career. He averaged five yards each on 16 carries, making the ‘Cats 7-1 on the season when Hubert rushes at least 15 times. With a giant question mark on the running back position for 2014, it’s yet to be seen how much Hubert’s solid production over the last three years will be missed. Despite the future, he’s definitely managed to etch himself a place in the pantheon of great Wildcat running backs.

Tramaine Thompson grabbed four of Waters’ passes for 56 yards in his final performance, most of which came on a huge 35 yard catch to convert a first and 24 in the third quarter. Curry Sexton added three catches of his own for 37, and Glenn Gronkowski continued his theme for the season, catching only one pass but taking it 46 yards off of the seemingly unstoppable run/pass option play. Daniel Sams saw little action in the game, but outside of his pass that Tyler Lockett dropped and the resulting fumble, he did manage to carry the ball four times for 23 yards.

The offense finished the day with a fantastic 6.2 yards per play and 40.3 yards per possession average. Of their eight meaningful drives*, they drove the ball into scoring position six times. They managed to score on all but one of those opportunities. Only one punt and one turnover resulted from the rest. All in all, this was arguably the best start to finish performance for the offense this season. 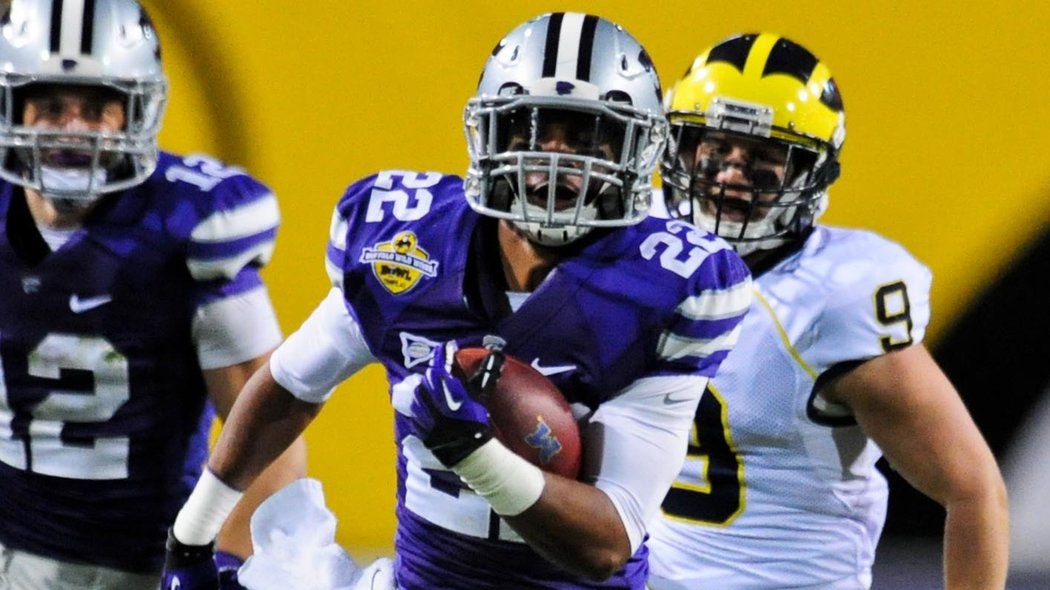 Coming into the game, a lot of the chatter was centered around how well the Michigan offensive line — who gave up 34 sacks this season — could protect the quarterback against Wildcat sack machine Ryan Mueller. Mueller finished the game sackless and managed only one tackle, but his continued pressure on Shane Morris caused issues, especially late in the game. The coaches repeatedly switched Mueller back and fourth between the end and tackle positions trying to gain an edge and get to Morris. The offensive line held strong though and the freshman kept his composure well through most of the contest.

The two notable exceptions were the end of the third quarter when Charmeachealle Moore fought off Wolverine tackle Michael Schofield and sacked Morris from behind. Morris fumbled but the ball took a lucky bounce right back into the freshman’s arms, saving the turnover. Morris wasn’t so lucky about 12 minutes of game clock later, when a strong rush by the Wildcat front four forced a bad pass that was tipped up by Blake Slaughter into the arms of K-State’s Dante Barnett, who returned it back 51 yards to the Michigan seven yard line and set up the ‘Cats final score of the night. Morris finished the night respectably, going 24 of 38 for 196 yards through the air and contributing all but 22 of the Wolverine’s 65 rushing yards — though most of them came on a meaningless, garbage time 40 yard scamper with just over a minute left in the game. The promise he showed despite his inexperience might be the only positive any Wolverine fan could glean from the night.

In my breakdown of Michigan’s offense, the lack of a running game was definitely apparent as they ranked 110th in yards per carry on the season including sacks, and 66th in rushing S&P. Many wondered whether K-State’s defense, who struggled against the run at times this season, could hold them to similar production. As mentioned above, they did. The Wolverines averaged 4.3 yards per carry total, which seems fine until Morris’ 40 yard garbage time run is removed. Without that, they managed only 1.7 yards per rush and 25 yards total. Most of that yardage came from wide receiver Devin Funchess, who ran for 14 on Michigan’s fifth offensive play of the night.

Another big story coming into the game for the Wildcat defense was the return of senior Ty Zimmerman, who had been out since the TCU game. Zimmerman recorded five tackles on the night but his mere presence on the field undoubtedly had an effect, against both the run and the pass. Dante Barnett led all Wildcats with eight tackles on top of the interception and finished with defensive MVP honors. Blake Slaughter had seven tackles and Dorrian Roberts finished with six, also contributing heavily with pass defense in the red zone early in the game.

All told, the defense held Michigan’s schizophrenic offense to 271 yards and 4.9 yards per play. They held to their “bend don’t break” identity, allowing only field goals on the first two Wolverine drives, and never totally broke until late in the fourth when most of the starters were watching from the sidelines. From an outside perspective, it didn’t make for very compelling drama, but for the fans in purple, the lack of anxiety was appreciated. It was a beautiful exit for a unit that struggled for consistency throughout the year. 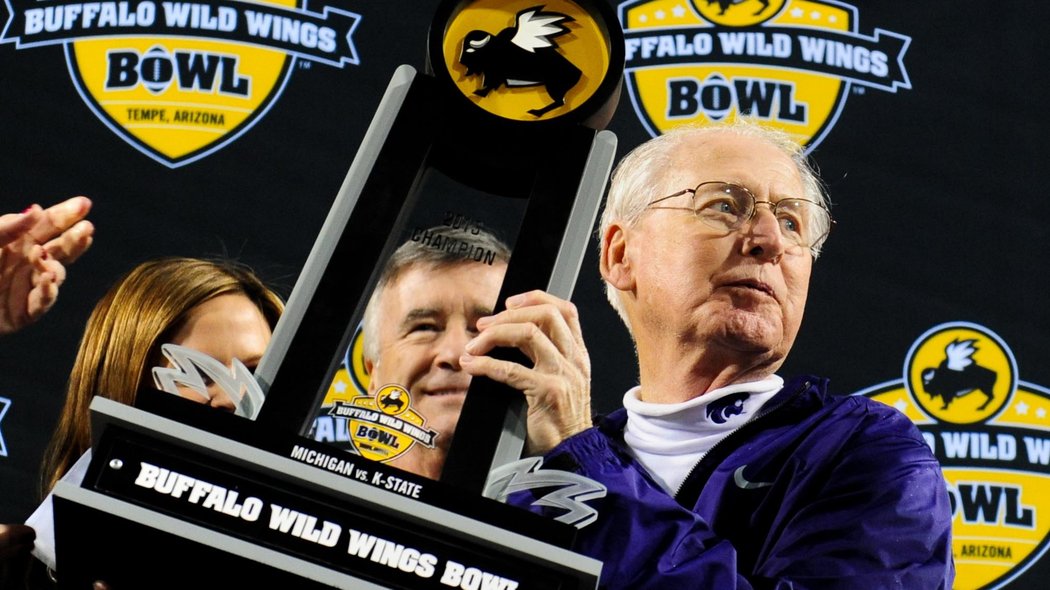 Prior to Saturday, it had been exactly 4,019 days since Kansas State had won a bowl game. They couldn’t have asked for a more resounding way to end the streak. True, this Michigan squad bears little resemblance to the powerful historical image of greatness that the program has cultivated in the last 130 years, but it’s still Michigan, a national brand with a national audience. It will be a while before we know what sort of affect a win like this will have on K-State, in either the national consciousness or just with recruiting. But even if nothing changes the outside perspective, internally, this win does wonders for pride and self-image, which despite winning the conference just last season, seemed to dwindle at times through struggles this year.

History has proven that the Bill Snyder era benefits greatly from the extra practice time in preparation for bowls. On field performance suggests this year was no exception. With many key pieces returning for the Big 12’s second best offense, expectations for 2014 are likely to be high. Something tells me this isn’t Coach Snyder’s last hurrah.