Because the college football world just cannot stop talking about the impending demise of the Big XII. Sigh.

If you buy something from an SB Nation link, Vox Media may earn a commission. See our ethics statement.

BracketCat's roster countdown is rolling right along. This time, he brings you #65, right tackle Matt Kleinsorge, practically a household name.

The season is almost upon us, so the time is ripe to take a look at the schedule. We continue our series on future opponents with another Early Opponent Preview, as jeffp171 takes a closer look at Louisiana Tech.

It feels like the college football media at-large has lost its collective mind. So in lieu of real news, of which there is little enough anyway, I'm just going to recap all the nonsense for you.

Thanks in part to Oklahoma president David Boren's ill-timed remarks on expansion (Ryan Aber, The Oklahoman), everyone believes that the Big 12 is poised for another breakup (Tom Fornelli, CBS Sports).

Doomsday scenarios abound (David Ubben, FOXSports), and while it's clear some teams would benefit from realignment, it's also clear that certain teams in the Big 12 cannot survive without the long-term stability of the conference (C. Austin Cox, BCSNN).

If the Big 12 does in fact expand, there are plenty of helpful suggestions about adding teams. As reported in the Monday Slate by Jon Morse, Jason Kirk notes that expansion is a win-win situation for the conference, and Matt Brown speculates on the conference adding bigger East Coast TV markets. Other candidates for possible expansion include Colorado State (sorry, Pan) and possibly BYU, although cultural differences may prove to be a wrench in the works there (Ryan Miller, Deseret News).

There has even been a suggestion to expand to 14 teams, with the adding of Cincinnati, Memphis, UCF and USF, giving the conference a decidedly eastern perspective (Clay Travis, FOXSports).

As always, there are those counseling patience instead. Texas Tech's president Duane Nellis, possibly reflecting the views of his counterparts at other schools, suggested the Big 12 was fine with its current membership (George Schroeder, USA Today). But TCU's Chris Del Conte had the best suggestion so far:

I'm a proponent of everyone just chilling out. It's been one year.

The best actual proposal so far, however, has been the one from College and Magnolia that calls for a complete overhaul of the college football landscape, and the formation of 16 eight-team superconferences. That altered landscape would look something like this: 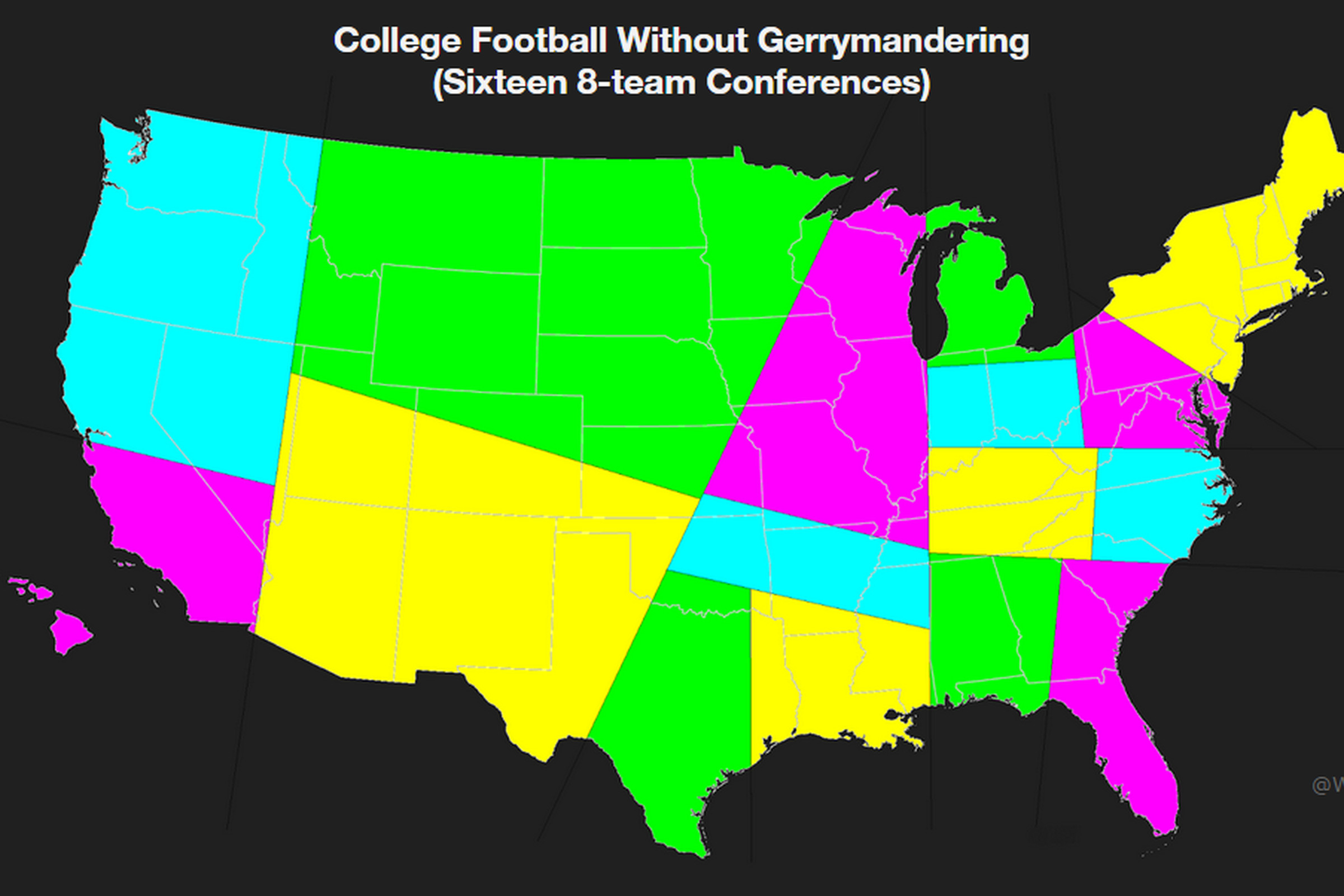 From the perspective of Kansas State fans, we would have to give up that automatic football win over Kansas in exchange for playing Nebraska every year. I can't decide how I feel about this.

Happy weekend of freedom and barbecues, all!