The first (or last) non-con in our countdown, lets take a look at the poor team sandwiched between our two big early games.

Share All sharing options for: K-State vs. UTEP 2014: The Look-Ahead Rewind

While there has been much talk and debate concerning the importance of both the Auburn and Oklahoma football games (and much worry about losses in both games), there is another opponent that the Wildcats must deal with in late September. The Miners of Texas-El Paso have the inglorious opportunity of being the Wildcats speedbump between the Cats two big early season matchups, and there is nothing in recent Miner history to suggest they will be much more than that.

Second-year Head Coach Sean Kugler leads his Miner squad into the 2014 season looking to improve on a woeful 2013 campaign that only saw two wins. Kugler took over for the retired Mike Price (best known for his extremely brief stint, he never coached a game, as Alabama head coach), who was the only coach in Miner history to take the school to three bowl games. But Price's last season with a winning record was 2005, as his 2010 bowl team finished 6-7 after a loss to BYU in the Independence Bowl.

The Miners have never sustained success, and the school is best known* for their picturesque stadium, The Sun Bowl, as well as hosting a bowl game of the same name (the last bowl game UTEP won, in 1967 and also their last appearance in their "home" game). 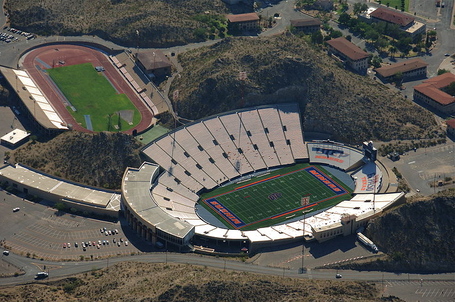 This has all the makings of a trap game for the Wildcats, who could be nursing their wounds from a tough Auburn game, or could be looking ahead for a possible defacto conference championship game with Oklahoma.

The Miners return several starters and bright spots from last season, including Senior QB Jameill Showers, who started the first seven games before an injury ended his season, and Sophomore RB Aaron Jones, who garnered some post-season freshman team list nods after compiling a Miner freshman-record 811 yards on 155 attempts. Jones is also notable for playing for the Miner basketball team as a reserve point guard, appearing in 10 games with six points and six assists in just under an hour of total game time.

The Miners offense likes to move the ball on the ground, and will employ a 4-2-5 scheme on defense. This should be a physical game, even if it ends in a likely blowout.

Most important for the Wildcat coaching staff, and helpful to Wildcat fans, is a matchup between UTEP and Texas Tech two weeks before the Cat/Miner matchup. There will be lots off good film to digest, including giving the staff an opportunity to see a conference opponent facing a common foe.

This was an easy pick for the BOTC staff, and with probably little thought everyone marked this one off as a big fat "dubyah".

* Well, the school is actually best known as the home of Don Haskins, several NCAA D1 Men's Basketball national titles, and the story that is the basis for the movie Glory Road.