The Fanfest at Copacabana Beach, swimming in the Atlantic Ocean and a visit to a favela highlighted a short four-day trip to Brasil's most vibrant city and host of the World Cup Final.

It turns out my Brasilian friend was right to tell me my plan to just stay in Brasilia for two weeks was a terrible idea.

It seemed like the right plan, since that's where I knew people and had a free place to sleep, plus all the flights I looked at around Brasil were really expensive. But when my friend finally found a shockingly cheap round trip flight to Rio de Janeiro a couple months ago I had to take it, and I'm comfortable saying it was the best decision I've made all year.

Another stroke of luck happened when I found a cheap place to stay through airbnb just three blocks from Copacabana Beach and the Fanfest you've all seen on TV. It turned out that the guy who lives in the apartment came home almost exclusively to sleep at night, but I got a key and even had a cool roommate from New York City who joined me for many of my Rio adventures.

He had been there for a couple of days before me after traveling around the country for games and probably wasn't too far off when he said Rio was the place fans seemed to migrate to after their team had been knocked out. That would certainly make sense, since it appears to be the heart and soul of Brasil and the World Cup.

Sadly, after walking up and down the entire beach, I was unable to locate either the Luis Suarez ad that lent itself perfectly to selfies, or the studio from which ESPN was purportedly broadcasting. I also learned the hard way that caipirinhas sold by vendors on the beach are not likely to be high quality, but whatever.

There was still enough going on around there that we honestly could have just stayed within walking distance and had a great time. People swarmed the area at nearly all hours, and even though it's the middle of winter, the water was ideal for swimming with some decent waves.

Naturally, since it's in Brasil, all of the beaches had soccer fields in the sand, complete with goals that were maybe 10 feet wide by 6 feet tall. There were volleyball courts as well, but they were being used for "fute-volley" 100 percent of the time I saw them occupied. Variations of the sport were everywhere. 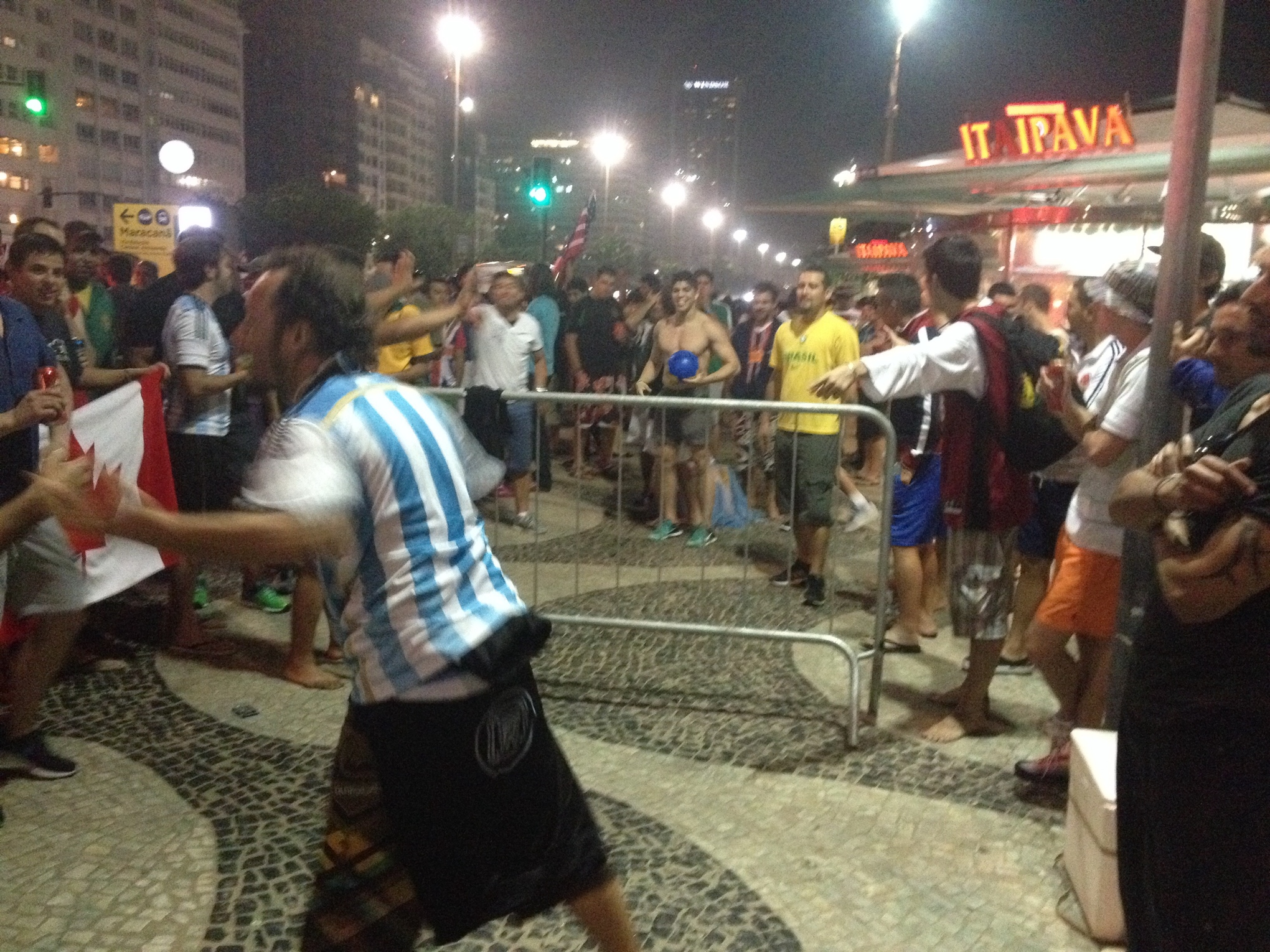 The first two of my four nights ended with me joining some exciting games, and I'm proud to report I actually scored twice in my beach soccer debut. It was a decidedly international affair, and I was fortunate enough to get on a team with some Australians the first night, so we even spoke the same language.

My favorite sequence came the next night when an Argentinian fell extremely easily and awarded himself a penalty as all my French teammates yelled "simulation!" while arguing with him for a bit. But since we weren't keeping score we let him take it and gave him a Bronx cheer after he scored, then the best French player got touched while on the run and jumped high in the air, yelling and doing about a 540º twist before falling into the sand. It was even more awesome when he put the free kick into the upper 90, earning a handshake from the Argentinian diver.

Naturally, the surrounding area was very tourist-friendly, with all sorts of shops, restaurants with tasty food, bars, and even an open square we came to refer to as "hooker central." Maybe the downside was that the one night we tried to go out late in the area (on a non-game night, I should note) all the bars seemed to be closed by 1:30 a.m., with the exception of some clubs we weren't willing to pay exorbitant prices to get into.

But clearly the centerpiece of Copacabana Beach was the Fanfest, where I ended up watching three games, starting with the sleep-inducing Argentina win over Switzerland and the emotional roller coaster of USA-Belgium. Take the atmosphere at your local bar, multiply it and the size of the screens by about 50, and you'll begin to have an idea of what it was like. 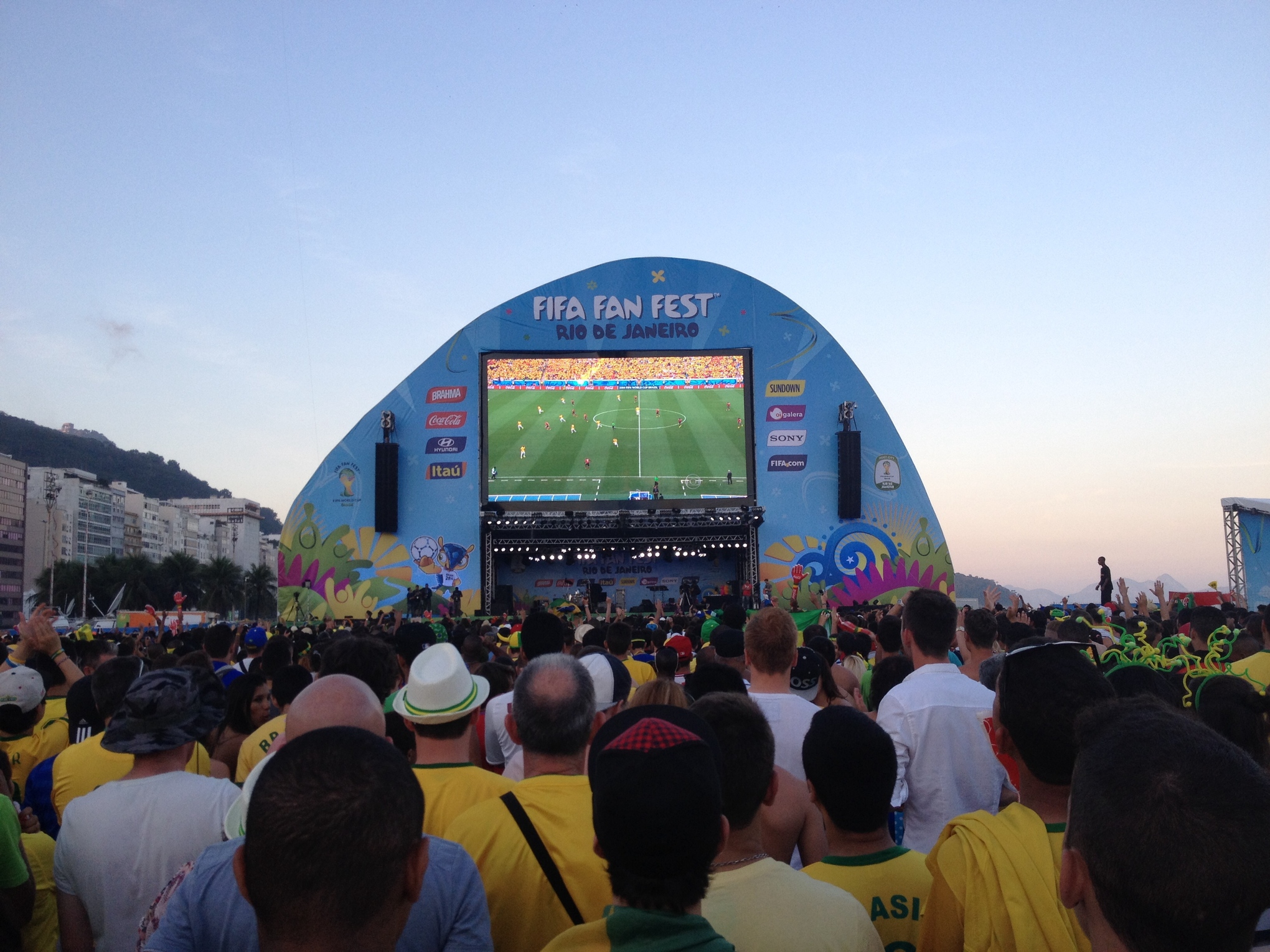 It was a lot of fun to be around all the Americans in the crowd on July 1, and I have plenty of witnesses to verify that I was loudly lamenting the Wondo substitution from the moment it was announced. Sadly, many of the fans could be seen leaving after Belgium made it 2-0, but it was great to see the renewed sense of energy and greater urgency in the cheers after Julian Green's stunning extra time goal.

I felt like there were very few actual Belgians there supporting their team, and the Brazilians seemed fairly evenly split in their support. Many more France and Germany fans showed up for the first game on the Fourth of July, which was held in Rio, where you could barely get out of the metro station without a game ticket and no one seemed to be selling, but it was clearly the nightcap that made that day special. 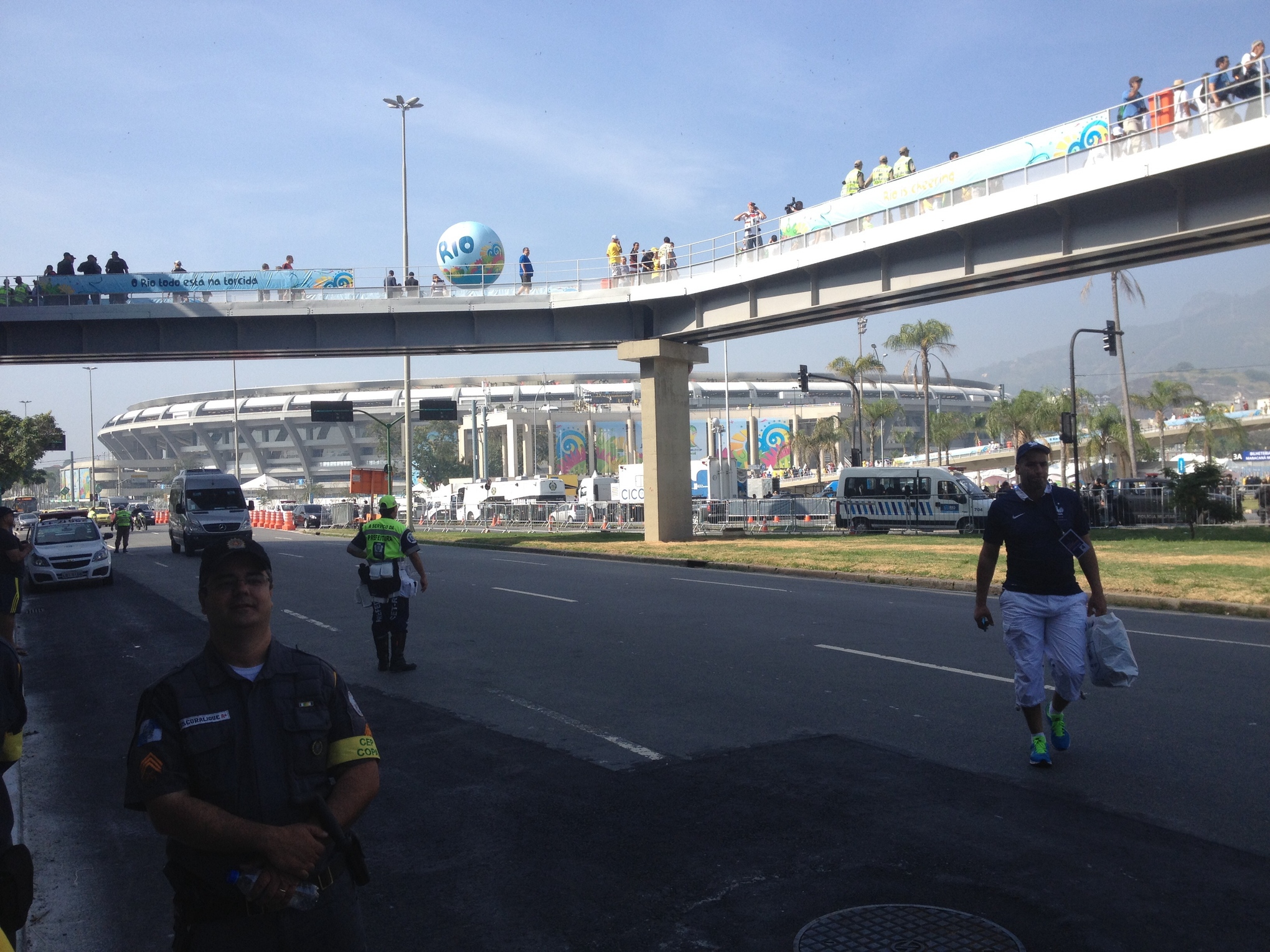 After Karim Benzema let me down, we didn't even bother to exit the Fanfest gates, which included significantly more beyond the viewing area that made the walk to get to the games kind of annoying, especially with the entrance at the furthest point from where we were staying. I'd already seen the passion for the Seleção at Estadio Nacional and a small gathering with my peers, and the importance was magnified once again for a tough quarterfinal machup with Colombia.

Thanks to the early goal, this game was much less stressful than the last and made for a much more relaxed atmosphere, at least until the final 10 minutes or so. Unless you had a really good reason to cheer for Colombia (or were an Argentina fan) the excitement and ecstatic celebrations left you with basically no choice but to root for Brasil, which appeared to be a feeling the referee also experienced.

At a few rare points in the game, notably after James Rodriguez's penalty kick, a decent-sized group of Colombians near me started a "Si se puede!" chant that was quickly quashed with boos and jeers. The only time it was ever close to quiet came when Neymar went down and it became apparent he wasn't getting back up.

However, that didn't seem to have any affect on the postgame celebration, which was unlike anything I've ever seen. It was nice to get some Fourth of July fireworks as fans flooded out onto the beach and streets at around 7 p.m. local time.

From there, the sidewalks were wall-to-wall with people for several blocks until at least 9:30, which was actually when I regrettably headed back to the apartment with plans to head out later that regrettably never materialized. The beach was also insanely packed and many people, especially teenagers, were wading into the water long after dark.

Fortunately, Rio has infinitely better public transportation than Brasilia, so we did actually venture out beyond Copacabana Beach for some tourist activities, sometimes with locals I had connected with before through various channels. Honestly, Ipanema Beach is probably the better place to go when the World Cup isn't going on, since its surroundings are considerably more picturesque. 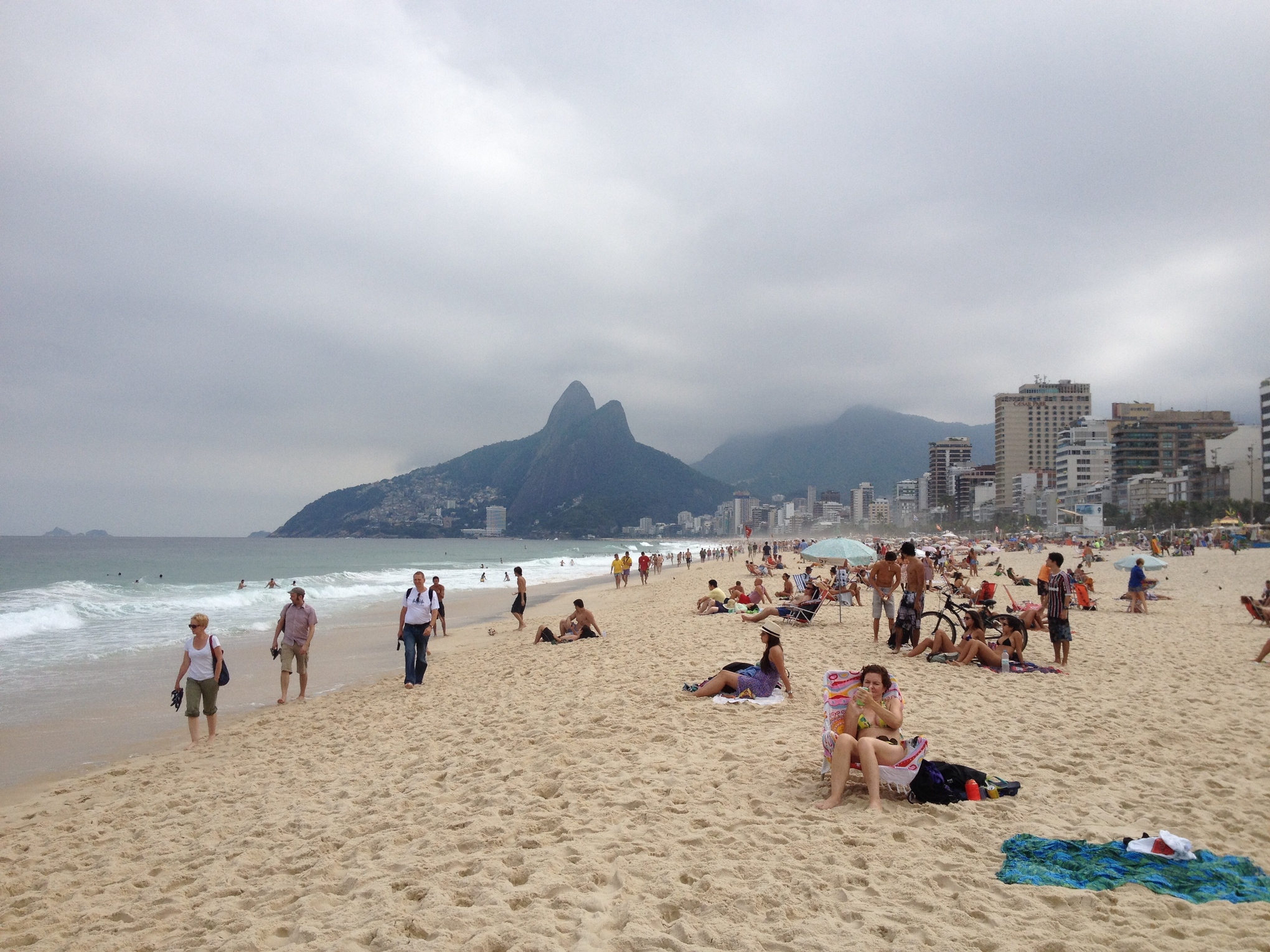 Sadly, our efforts to see Rio's most famous landmark - the "Christ the Redeemer" statue that overlooks the city - failed because of stupidly large crowds and a far too long wait time. However, we did get to Pão de Açucar (Sugarloaf) and saw the view at the top of the post.

Honestly, though, if you're going to Rio on a budget I'd recommend just hiking up the trail to the first of the two mountains and skipping the cable car to the second one. The views are nice, as you can see from the top of this post, but it's full of people trying to take pictures and certainly not worth the price of close to $30, which might be raised because of the World Cup.

This was definitely the case at Favela Santa Marta (formerly Dona Marta and where Michael Jackson shot part of his "They don't care about us" video) where the asking price for a full tour was 70 reais, or about the equivalent of $31.50. Once we showed them we only had about 30 reais each to spend, the price suddenly dropped to that amount.

It probably would have been perfectly safe to go without a tour guide, but it was kind of cool to see it through the eyes of a favela resident who couldn't have been more than around 22 years old. He may not have known a lot about the neighborhood's history, but it was kind of cool to hear from him about everyday life and some of the anger towards FIFA and Brasil's government. 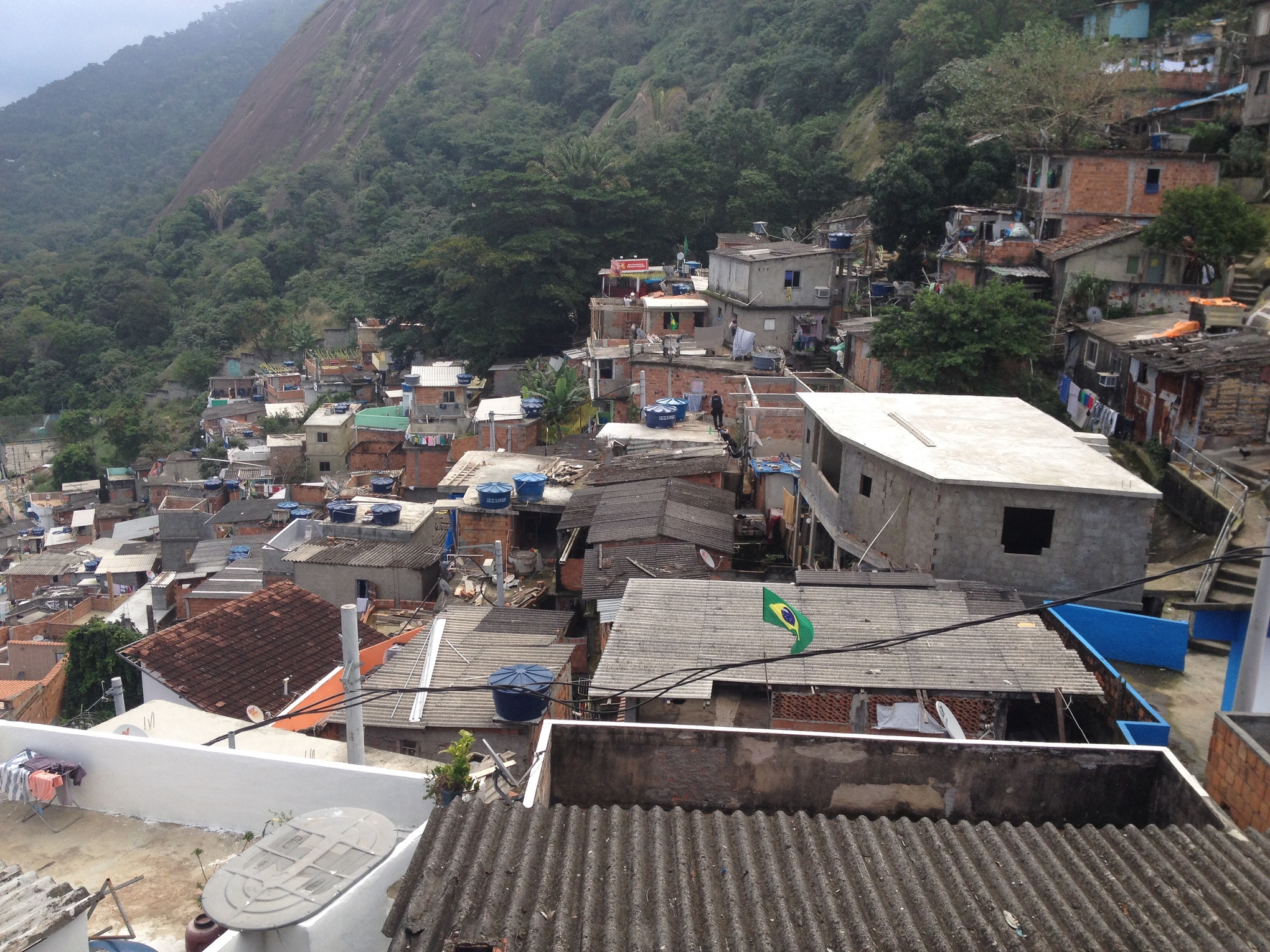 That was Thursday, and before going to bed I began my Friday with a trip to Lapa, which may be Rio's most happening spot for nightlife, or Aggieville on steroids. Bars and street vendors greeted me on all sides as I arrived at 1 a.m., and street vendors along with a large crowd inside and out were still going strong three hours later, although many places were already closed down for the night.

I closed out my all-too-short four-day trip with a run along the beach and one final swim before heading to the airport to catch Argentina's win over a lackluster Belgium team. The airport had a nice big screen set up in a ‘Budweiser Lounge,' but it was impossible not to already long for Copacabana Beach and so much else this wonderful city has to offer.