I went on an adventure to see some nature, then returned to watch the entertaining demise of Portugal and Ghana.

Share All sharing options for: World Cup 2014: Waterfalls and punctuality in Brasil

It turns out FIFA’s presence at the World Cup may have one significant redeeming factor after all.

Without the international help, I’m not sure a group of Brazilian organizers would ever actually get a game to start on time. Perhaps you’ve heard it as a stereotype, but my experiences (which are not limited to this trip) have overwhelmingly proven the people of this country are simply late to everything.

Before anyone who knows me complains, I should stress that this is a habit of mine as well, and it could be argued it’s not always a bad thing. For instance, on Wednesday I got to catch the last 40 minutes of Uruguay-Italy waiting for my friends in the mall, where my host/friend had left me before taking the elevator to her job at a lawyer’s office.

This was how I discovered a rather remarkable and ingenious setup in the center of all the shops, where you’ll typically find annoying sunglasses or jewelry stands in most American shopping centers. Not so at Brasilia Shopping.

Instead, they had an incredible setup featuring a massive projector and tiered area with pillows and couches. You can see it here during a break between games Thursday, since I was too engrossed in Italy-Uruguay to think of taking a photo. 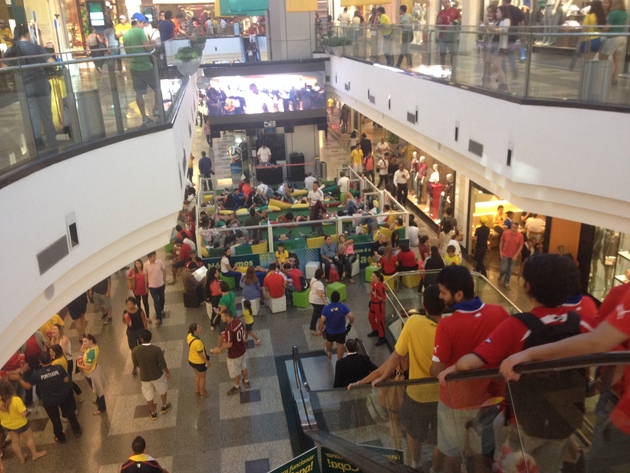 Obviously, all the sofas and pillows had long since been taken for such a crucial and riveting match on Tuesday, so I joined what had to be at least 200 people crowded around the area on the first and second floors to watch Uruguay advance, which seemed to please most people in attendance. The laughter that increased with each replay made Luis Suarez’s bite all the more ridiculous, and the second-biggest cheer behind Diego Godin’s goal was probably when Italy goalkeeper Gianluigi Buffon made his way into the penalty area on his team’s final chance.

About 20 minutes later my new Brazilian friend and her Icelandic guest arrived, and we were able to catch the pivotal last 20 minutes of Greece and Côte d’Ivoire. So even though I didn’t watch as much soccer as I might have liked, I did get to see the most exciting parts.

That wasn’t really the case on Wednesday, when all we really saw was about five minutes of Switzerland-Honduras, including the second goal, after which we switched to France-Ecuador for five minutes before reluctantly leaving. But this is a rare instance when I’m willing to concede missing so much World Cup action was definitely worth it, since it meant a trip to Perenópolis, a small tourist town renowned for its surrounding waterfalls and to a lesser degree, its unique historic feel and architecture.

This is a beautiful place to visit, and the difficult drive up a cliff on a dirt road to see the two waterfalls at Vargem Grande Farm is definitely worth it. My Icelandic friend and I also learned, for the second time this week, any time you bring out a soccer ball in Brasil you’ll soon be joined by people of all ages, even barefoot in the sand.

Sadly, the day had to end far too soon, and that’s where things really got interesting 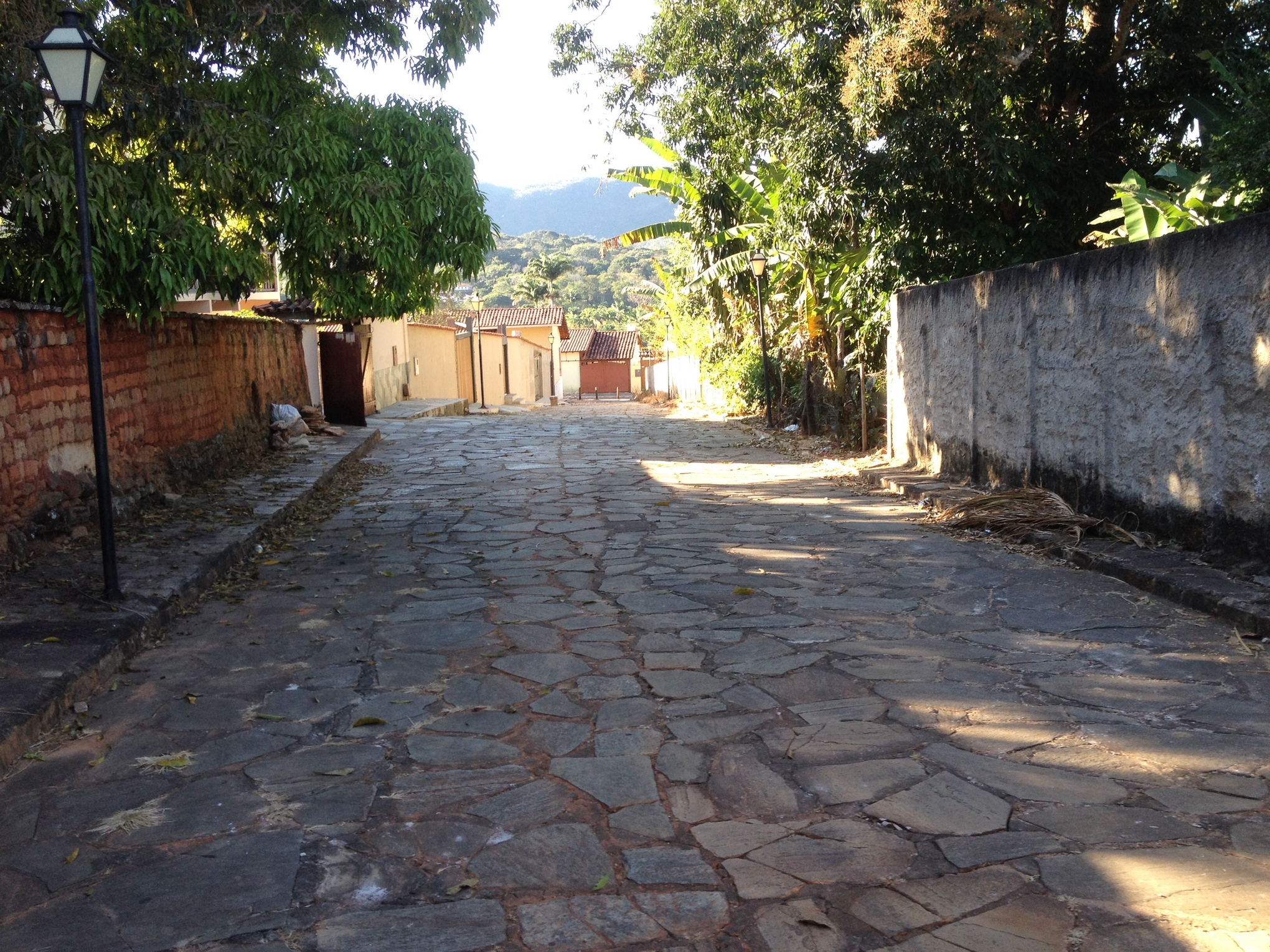 After a few drinks the night before, my new Brazilian friend had shared that she didn’t like to drive in the dark, she didn’t actually have a driver’s license, and she’d been in 12 accidents, two of which she claimed could have killed her.

This was why the next day, when we were running late (again) and it became obvious we weren’t going to be heading home by 4 (the sun sets a little after 6 this time of year) and she mused that someone else could drive, I quickly volunteered. It seemed like the intelligent – not to mention gentlemanly – thing to do, since I was the only one of the three of us with a valid license.

Obviously, we survived without incident, but it’s not really something I’d like to do again. In case you ever find yourself driving in Brazil, here are some helpful tips:

1. Motorcyclists are crazy – They are clearly not subject to the same laws of the road as other vehicles, and their general preference for the smaller, cheaper models makes it that much easier to squeeze between two cars or pass anywhere else they might fit in.

2. Fewer signs ­– Even if you can read Portuguese, you’d better be paying attention to the road ahead of you to see what’s coming up, because the signs to give you advance warning are much less frequent here, especially on the highways in rural areas.

3. Speed cameras – Speaking of signs, make sure you’re watching for the ones that say "fiscalização électrônica" on them. Drive too far above that speed indicated inside the red circle, and the frequent cameras (especially in big cities) that make up for the lack of police on the roads will catch you, though it’s not quite clear how notices for fines would be sent to visitors.

4. Trucks are SLOW – If you’re in the right lane on the highway and can see a large truck ahead of you, it’s time to move over or start braking. My friend tells me nearly all of them greatly exceed their weight limits because of corruption and lack of oversight, turning them into the equivalent of a tractor on a highway in Kansas.

5. Speed bumps are used liberally – Basically every time the speed limit makes a significant decrease, you can expect to see one, and they’re seemingly put in at random in small towns. Be on the lookout for the picture signs indicating the bumps, because they’re usually the same color as the road and it’s not fun to hit them at 40-50 km/h.

My first trip out to a Brasilia club (too crowded and loud for my tastes, and of course we arrived after midnight despite initially planning to get there closer to 11) meant I got less than five hours of sleep before waking up for another soccer gameday. This time it was Portugal-Ghana, my seats weren’t quite as good, and the crowd was considerably less yellow. 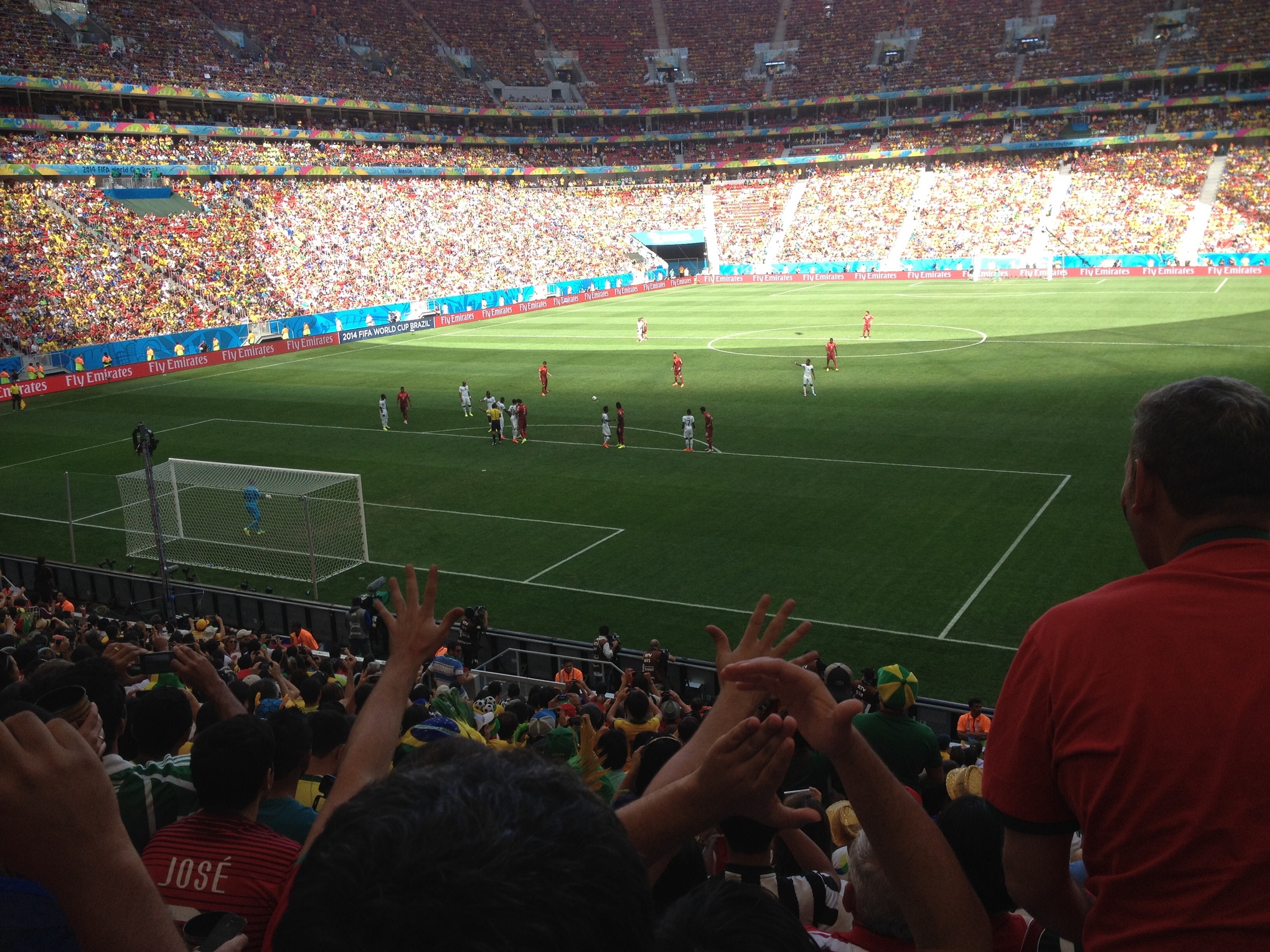 With my brother watching on TV and texting me updates on the game in Recife, I was extremely pleased with my decision to be at the stadium to see what turned out to be a series of massive failures by Cristiano Ronaldo. My afternoon was only enhanced by the friendly, English-speaking Brazilian with a deep-seated hatred for Portugal ("Have you ever been to Portugal? Then you’d know why.")

Several friends joined me for this game, so we hung around for a lot longer afterwards. This meant we got to see a lot of the cool interactions between Portugal and Ghana fans, not to mention a whole host of supporters from different nations.

I wore my US soccer jacket and was able to have an interesting conversation (in French and English) with a man from France wearing an Ivory Coast jersey and a woman from Brasil, among others. The shared passion for the game basically makes everyone friends, and taking pictures with people from other countries seems to be a universal thing, for some reason.

The closest thing to animosity I encountered was the group of Ghanians who jokingly said they wanted nothing to do with me before we had an insightful conversation about the USA’s chances vs. Belgium. They think we’ve got a shot, and I tend to agree, despite the immense amount of individual talent on that squad.

One of them also said this: "I feel very comfortable saying Michael Bradley is s***" and went on to specify all the things he’s done poorly this tournament. I couldn’t really argue after watching the first two games. 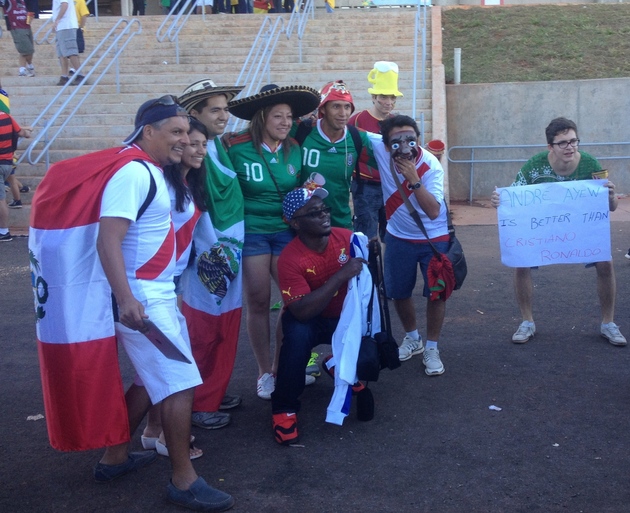 Next up: Plans for this weekend include a city tour of Brasilia during the World Cup’s first off day Friday, another club outing (any tips for how to enjoy this? Other than heavy drinking?) and a Brazil-Chile watch party with the locals. I’m told this will also include the chance to play some futbol pregame.