Everything went as expected on the field, and I had a nearly perfect view to celebrate the experience of a lifetime in watching Brasil at the World Cup.

Well, it's pretty much all downhill from here. Yesterday, I got to see the pseudo-religion that is Brazilian soccer in one of its most impressive temples, the 69,000-seat stadium in downtown Brasila.

After watching The Netherlands dispatch Chile, I joined the mass of yellow jerseys gathered in and around the stadium, which clearly would have held many more if not for those pesky fire codes we have these days. Whereas at an American game you're likely to see a lot of club jerseys or a somewhat balanced mix of red, white and blue, the overwhelming majority of Brazilians united in wearing the traditional yellow.

I did my best to fit in, and as far as I could tell no one called me out for having a slightly different color and no Brasil insignia. Meanwhile, a handful of Cameroon fans made the trip, though they were rarer and mostly quieter than a KU football fan in Manhattan. 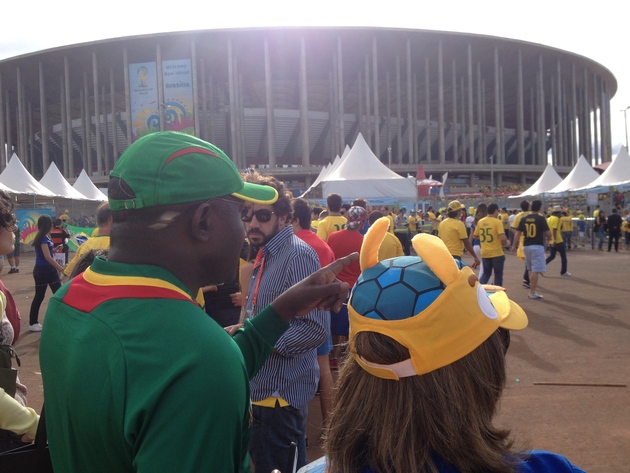 Many people actually get the day off work when Brasil plays, so the celebration and TV coverage surrounding the game started early, possibly before I even got out of bed. By the time I got there a little less than two hours before kickoff, many were already in their seats and it was difficult to walk through the sea of people gathered at the FanFest just outside the stadium. 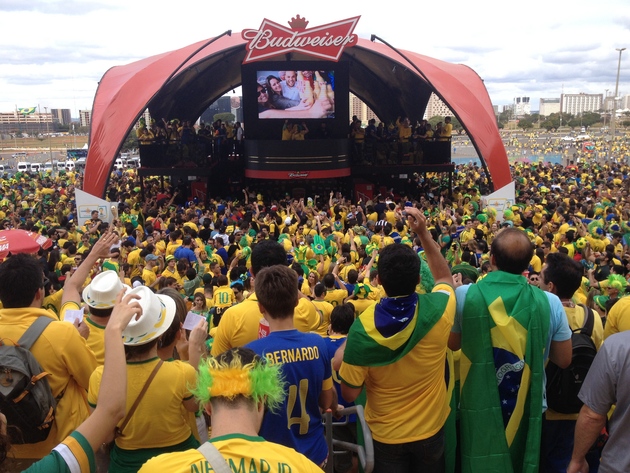 The degree of nationalistic fervor the country has for its team is difficult to describe, but perhaps best encapsulated by the way the national anthem was performed. After an instrumental opening, the entire stadium began belting out lyrics, and about halfway through someone cut the music, allowing the players, coaches and fans to finish out the last few lines before ending with "Pátria amada, Brasil!" which translates to 'beloved homeland."

Otherwise, the pregame wasn't that much different from what you'd expect at any large sporting event, with fans clamoring to take pictures and yelling at players when they came on the pitch. I'm also pleased to report Outkast and AC/DC are still getting play internationally to get everyone hyped up for the game.

Hopefully many of you watched as the Seleção rolled Cameroon behind the brilliance of Neymar, who almost seemed to be playing a different game than everyone else. I'm not sure if the TV cameras caught it or not, but even when he failed on an attempted 'rainbow' just outside the box in the second half, even the Cameroonian defender seemed to make a gesture to acknowledge the sheer audacity to attempt such a move.

The current Golden Boot leader was clearly the jersey of choice, and he obviously got the biggest cheer during the pregame lineups. In fact, it was rather surprising (and a tad disappointing as a Chelsea fan) to hear the huge drop in volume from No. 10 to No. 11, which is worn by Oscar, another talented 22-year-old.

I have no idea how my seat came to be two rows back directly behind the goal, easily the best of any of the three games I'll be attending. But it gave me a terrific view of what was happening on the field, as well as some of the passionate characters around me. 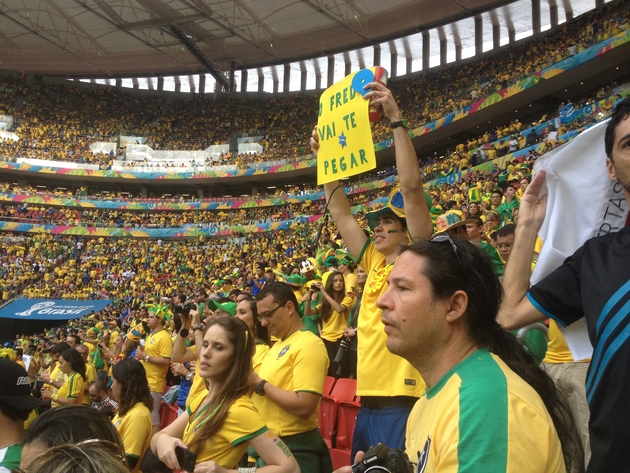 There was the father-son combo who came down before the game and spent several minutes smiling and taking pictures, and especially after goals in front of us in the second half many draped with flags would come down to be a little closer to the celebration. Then there was the old guy with a camera who had to be at least 50, but showed more enthusiasm and desire to get in front of the cameras than even those with signs or elaborate face paint.

But perhaps my favorite fan was the guy sitting next to me, and not just because he thoroughly ignored the wave that passed through sometime in the first half. I'm not sure exactly what he was saying because my Portuguese is about the same level as a two-year-old Brazilian with a hearing deficiency, but I do know his favorite word was "puta!" and it was often used along with the names of Brazilians who had been beaten or perhaps made a bad touch.

That's not to say he was entirely angry the entire match, though he was surprisingly subdued after Brasil's first half goals for a dude wearing a Neymar jersey. Then again, I witnessed almost none of the physical contact that is ever present, even among strangers, in an American goal celebration, perhaps showing a well-deserved 'we've been here before and are expecting much more' mentality.

FIFA's heavily corporate atmosphere seemed to blunt the passion a bit as well, and it was certainly strange to hear everything over the PA spoken in English first, then Portuguese. Nonetheless, the majority of fans stuck around to show their support for a while after the final whistle, and even in the gated, well-off neighborhood where I'm fortunate enough to be staying with a friend, the sounds of parties could be heard long after midnight. 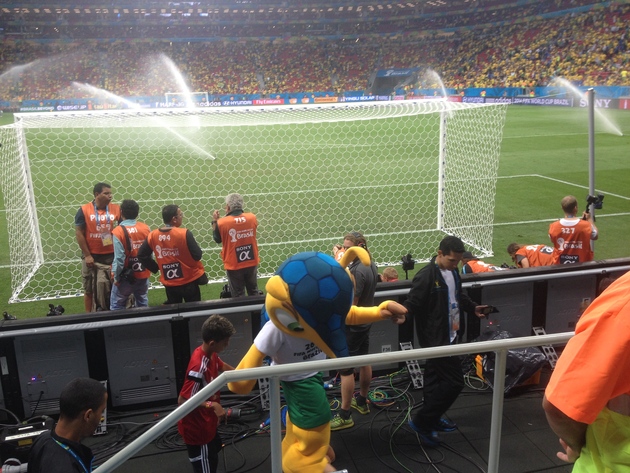 Perhaps that's why I'm still kind of tired this morning and feel like I've done an inadequate job fully describing one of the best sports experiences of my life, although it's tough to compare to the times when I'm either working to cover a game or have a deeply personal rooting interest. But it's one of the few times I've ever felt like I'm watching something close to the pinnacle of a sport in its mecca, with the time I got to see Rafa Nadal's first round at the French Open as the only reasonable comparison.

Thus far, I've gotten only a small taste of Brasilia, which my Canadian friend who moved here not too long ago tells me "isn't really Brasil." More on that later, but this is getting long and for now I've got to get ready for a two-day adventure to Pirenopolis, where we may ignore TLC's advice and go chase some waterfalls.