Cats a 9 seed, get Kentucky, Shockers

A good weekend could be everything some Wildcat fans hope for.

Share All sharing options for: Cats a 9 seed, get Kentucky, Shockers

Oh, the potential storylines. There's something to fire every Wildcat fan in the Midwest Region bracket, which is where K-State finds itself after the 2014 NCAA Division I Men's Basketball Championship bracket reveal this evening. 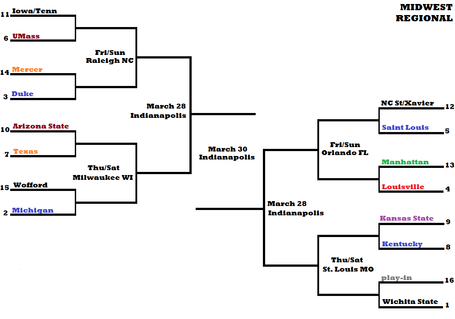 The Wildcats earned the ninth seed, and they'll travel to Saint Louis for a Thursday matchup with the eighth-seeded Kentucky Wildcats. The juice? This is a rematch of the 1951 NCAA Championship Game, which K-State lost to a bunch of guys who were getting paid under the table -- and that's not just some random accusation, Kentucky actually got the death penalty as a result. Back in those days, though, the NCAA didn't vacate wins, so the national championship which should arguably belong to Kansas State still sits in Lexington.

Should K-State survive that, they'd have a Saturday collision with undefeated in-state non-rivals Wichita State, a game whcih will absolutely top the schadenfreude meter no matter who wins. That, of course, is assuming that Wichita State survives the winner of a Tuesday contest in Dayton between Cal Poly-SLO and Texas Southern, and, well, let's not be ridiculous.

Let's imagine, for a moment, that K-State survives to the Sweet Sixteen. They could run into North Carolina State or Manhattan, but that's highly unlikely. Also unlikely, but a very, very tasty proposition, is Xavier. Then again, maybe not. Do you want to relive that double-overtime nightmare from 2010? No, the most likely option for that game would be Saint Louis -- so at least it's still a regional bragging rights thing -- or Louisville, which is currently playing as though they're a giant death-dealing harvester of doom.

And then there's the regional final, should K-State manage to stumble that far. The second seed in the Midwest is Michigan. Wouldn't it be fun to beat them in a bowl game and beat them to get to the Final Four? Yeah, that'd be a kick in the pants. If not Michigan, then beating Duke is always fun. Or maybe Massachusetts, again completing an intersectional football-basketball double. Or Texas. Oh, the possibilities.

Let us remind you that BotC's Bracket Pick'em contest is awaiting your pleasure, and there is an IMPORTANT RULE AMENDMENT if you've already signed up. As for the tournament itself, stay tuned for more news and analysis as the week progresses.

More From Bring On The Cats