It Could Happen to You

In which Jon briefly outlines a fairy tale with a terrible ending.

Share All sharing options for: It Could Happen to You

By now, you've probably seen the above image, with our intrepid scribe Curtis Kitchen sitting right behind Brent Musberger and Fran Fraschilla on media row at the Big 12 Championship.

And, you know, that's pretty cool.

But now we have another picture which really puts things in perspective. It's hard to see at a size we can properly present here, but though the magic of the interwebs we're able to cast the mystical spell known as "clickus to embiggenus" on the photo, and then you can zoom in to your cold and blackened heart's content and all our efforts to make it so you can actually see it have ended in miserable and humilating failure: 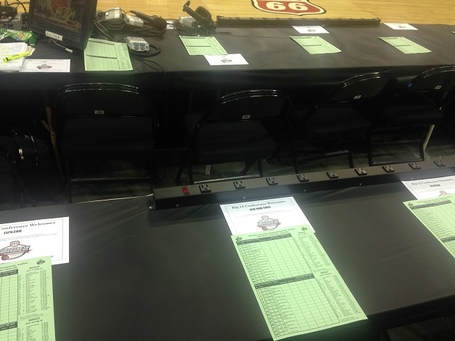 That's right. Our man Curtis, assigned to sit right next to ESPN and The New York Times. As I ponder this glorious moment, all I want to do is pick up my cell phone and hit "Call", and then utter the most important advice I possibly can for my pal: "Dude, whatever you do, don't lose a shoe on your way out tomorrow night. Musberger might find it."

(And yes, I realize the embiggened photo probably displays upside down. I have no earthly idea why it's doing that, and I've tried to fix it to no avail. Apologies.)

Oh, by the way. This is your open thread for tonight's semifinal action.

More From Bring On The Cats