Both squads are on the road, but you can only watch the men today unless you wish to financially support the enemy.

With a week off after today, the men conclude the first half of conference play in the Appalachians. A win would put the Wildcats a game ahead of pre-season expectations and would leave the 'Cats three wins shy of ensuring a .500 league record -- with games against TCU and at Texas Tech, as well as both games against floundering Baylor, as part of the remaining schedule.

Of course, today's tilt is on the home court of what would appear to be the most (positively) surprising team in the league, even moreso than the Wildcats. But don't let the record fool you; West Virginia's four wins include TCU and Baylor (granted, both on the road) and a sweep of Texas Tech.

Odds: Vegas appears to be a bit blinded by the records, installing the Mountaineers as a 3.5 point favorite.

Television: Big 12 Network, with Dave Armstrong on play-by-play and Bryndon Manzer on color. Once again, the window is split and therefore the game may not be available in your area -- especially if you're in Texas, because you'll instead be treated to the horror of TCU at Texas Tech. The sports pack options if you're in that position are Altitude2 and MASN. Here are the clearances for the game: 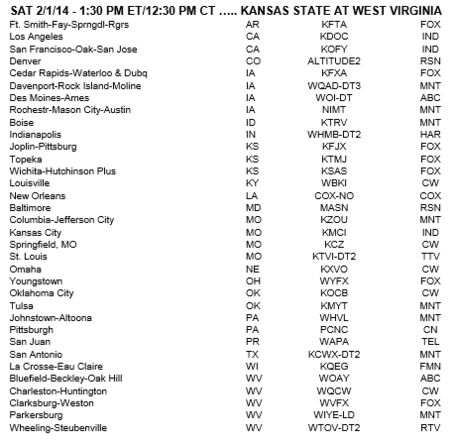 Also note: the broadcast in New Orleans may be tape-delayed, as COX-NO is carrying both early B12N games. If you're in the Crescent's media catchment, be sure to check your guide.

The women will also be in action, tonight rather than this afternoon. Unfortunately, you can't watch that one unless you're willing to give Iowa State some of your hard-earned lucre. As the game's not generally available on television, we'll be skipping the open thread tonight.