The purpose of this post is to be a one-stop shop for explaining the method I use for my Transitivity Rankings. Everything you need for understanding the process should be contained here. The focus is more on the "what" than the "how", but anyone with questions about where I get my data, what software I use, and what algorithms are involved can ask away in the comments.

So, what are the Transitivity Rankings? It's a system for ranking all FBS teams based on the much-maligned transitive argument. You know, the one that says since Team A beat Team B, and Team B beat Team C, Team A must be better than Team C. Such arguments are of questionable validity, especially as the number games involved grows. Nevertheless, I think the method described below has some validity as a measure of a team's performance during the season.

To break ties within this first layer, we need to know not only the number of teams you have a win path to, but also the length of your shortest win path to every team. Here, "length" refers to the number of games in an argument. For example, if you say Team A is better than Team D because Team A beat Team B, Team B beat Team C, and Team C beat Team D, the length of this path is three games. Once we have your shortest win path to every team, we take the average length over all of these shortest paths. As shorter paths are clearly preferable to longer ones, ties from the first layer are settled by which team has the shortest average win path length. If two teams are tied in the first layer and also have equal average win path lengths, they will have the same ranking in the WTR.

The LTR in determined analogously to the WTR, but now we consider the number of teams that have a win path to you (from the perspective of the losing teams, we call these "loss paths"). The highest ranked LTR teams are the ones with loss paths to the fewest teams, with ties broken by average shortest loss path length (longer loss paths are preferable to shorter ones). Once the WTR and LTR are calculated, the CTR sorts teams by the average of their WTR and LTR rankings.

We can see the WTR as measuring roughly how good your wins have been, as you can accumulate short win paths by first beating many teams yourself, and also having beaten strong teams with many wins of their own. In the same way, you can see the LTR as measuring how "good" you losses have been. For example, among one-loss teams, the highest rankings in the LTR go to teams who have only lost to an undefeated team. The CTR then weighs both of these measures equally to give a final ranking. For the college football Transitivity Rankings, only games between two FBS opponents are considered.

Sound good? Just in case, let's work through a small example so you can really see the mechanics of the system. We consider a small league consisting of six teams, Teams A, B, C, D, E, and F. Every team has played three games so far, and the results are given below:

The following graphic summarizes these results. For each pair of teams that have played a game against each other, there is an arrow pointing from the winning team to the losing team. 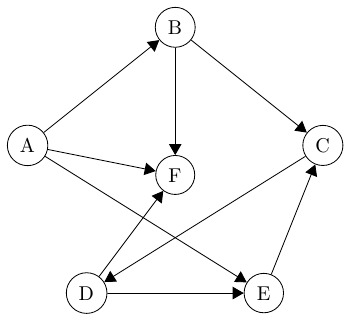 Now let's find the WTR for this league. Our first step is to determine which teams have win paths between them, and the length of the shortest such paths. I've done the hard work for you, with the results given the the table below. Numbers in the table give the length of the shortest win path from the row team to the column team (e.g. the shortest win path from Team B to Team D has length 2), with a dash signifying that no path exists.

For the LTR, we follow a similar process. The table below gives the shortest loss path lengths from the row team to the column team. Astute observers will notice that this table is just the transpose of the last table (switching rows with columns). This makes sense, as a win path from, say, Team A to Team B is also a loss path from Team B to Team A, with the only difference being perspective.

The final step is to calculate the CTR, which is done by simply averaging each team's WTR and LTR then ranking from best to worst. The results are below.

Is the CTR any good? I guess it depends on what you mean by "good". I don't necessarily see the CTR as determining the best teams, but instead determining whose performances have been the best. It is certainly more a descriptive tool than a prescriptive one. It's nice in that there is a strength of schedule factor built in automatically, and if you want to build a ranking based only on wins and losses, I think this is a decent way to do it.

Of course, this also highlights potential drawbacks. As wins and losses are the only input, there is no margin of victory component considered. I think MoV is overblown in general, but that doesn't mean I think it has no role to play in evaluating team performance. If you've been following my weekly posts, you likely have seen some head-scratching results that were hard to rationalize. However, on the whole, I think the CTR is a very interesting tool which can help you make some sense of the college football landscape.

One final note: Anyone who enjoys playing with the transitive property in college football should check out myteamisbetterthanyourteam.com. They've been in this game much longer than I have, and have a really fun application that lets you find win paths between any two teams in college football. And when I say college football, I mean ALL of college football (FBS, FCS, Division II, NAIA, whatever). They also have an option to include "comparative scores" in their paths, where you can say Team A is better than Team B because both teams beat Team C, but Team A won by more points. You should definitely give their site a look.