The Wildcats venture away from Manhattan again, but this time it's actually into their opponent's lair.

On the heels of their brilliant win over Oklahoma State Saturday afternoon and their first appearance in the AP Top 25, the Cats will make their first visit to an openly-hostile arena tonight to face the TCU Horned Frogs. This shouldn't present much of a problem for K-State, but let's not forget that the Frogs ambushed Kansas last year. The Frogs are led by junior guard Kyan Anderson, who's scoring at a 16.2 points-per-game clip. Junior forward Amric Fields is draining 15 a game and adding six boards per contest. TCU doesn't have any marquee wins, but has knocked off Mississippi State on the road and Tulsa at home. The Frogs opened conference play with a 74-69 loss at home to West Virginia on Saturday. TCU is led by former Nevada, Stanford, and LSU head coach Trent Johnson, who has a career record of 246-210 in his 15th year. Johnson, a Boise State alum, is in year two at Daniel-Meyer, with a record of 20-25 since joining the Frogs.

The Wildcats should win this one, but really need to avoid looking forward to Saturday. Their first road test of the year against an opponent that knocked off Kansas last year is not the sort of game you want to take lightly, and the Cats NCAA hopes depend far more on taking care of business against the lower half of the league than they do on scoring big upsets going forward. 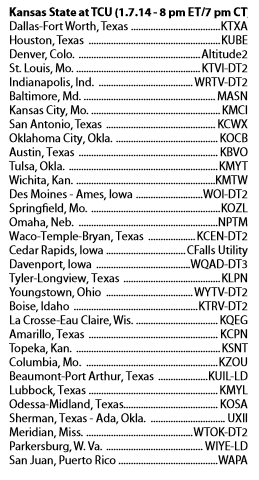 Time for another Wildcat Victory!