Two games this week. Both are must wins. Luckily, both should be manageable.

Time for the Wildcats to bear down and close the gap between four wins and the probably-required nine. They can deal with almost half of that this week.

The game: Kansas State (14-6, 4-3, ARV/ARV) hosts Texas Tech (10-10, 2-5). K-State leads the series 18-12, and have a commanding 11-3 lead at Bramlage. Bruce Weber has yet to lose to the Red Raiders, sweepting the regular season set last year and picking up a third win in the Big 12 Tournament. He's got a 6-3 record all-time against Tubby Smith, who will (surprisingly) be coaching against the Wildcats for the first time ever tonight.

Odds: The Wildcats are a nine-point favorite.

Television: Big 12 Network, with Dave Armstrong on play-by-play and Rich Zvozec on color. Here's the clearances for the game; NOTE that the State of the Union address is wreaking havoc with this broadcast, and it may not be on your usual channel! 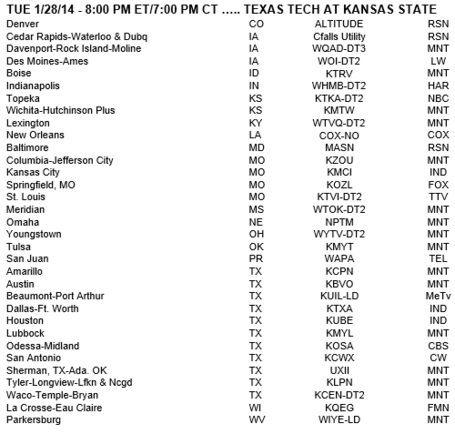 Also note: the broadcast on MASN will be tape-delayed, so if you're stuck going the sports-pack route, pick Altitude.