Can the Wildcats get back in both win columns today?

It's a tall test for the men in Ames today, but just as with Tuesday, it's a win-draw situation. A loss to the Cyclones isn't a doom bell, but a win would be massive. In Manhattan, a much easier task awaits the women.

Odds: Iowa State is a whopping nine-point favorite in Vegas.

Television: Big 12 Network, with Mitch Holthus on play-by-play and Chris Piper on color. Here's the clearances for the game (far more limited coverage than normal due to Texas/Baylor also being a "Big 12 Network" game and sharing the time slot): 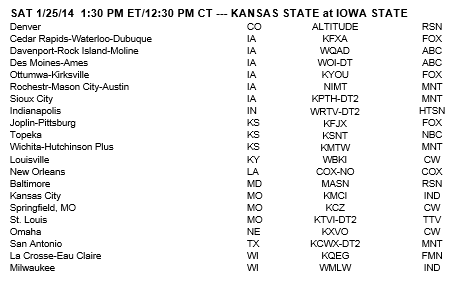 If you're not covered above, and you have DirecTV or Dish with the sports package, try Altitude or MASN. (If those don't work, y'all get to watch the game without me, as I'm stuck with UT/BU.)

Radio: K-State Sports Network (also Sirius 137/XM 192), with Wyatt Thompson and Stan Weber. Note: the game will NOT be broadcast on KMAN or KBLS, as the women's game will be there. In Manhattan, switch to KMKF 101.5.

The women will host the latest edition of the Sunflower Showdown.

Promotion: Today is Willie's Birthday! I don't know what that means exactly.

Radio: KMAN and KBLS, with Brian Smoller on play-by-play and Claire Coggins on color.

Note that since both games take place at the same time, we'll have a combined game thread.