The Analytical: Examining the numbers from Iowa State vs Kansas State

Nugget took a deeper statistical look at the Iowa State game, and the results show just how close this game really was.

Share All sharing options for: The Analytical: Examining the numbers from Iowa State vs Kansas State

Again, a big thanks goes to Matt Mills, @millsGT49, over at From The Rumble Seat for the Win Probability Graph and help with post development. Thanks Matt! If you like this post or even if you don't go check out his work. All the cool kids are doing it.

If you have any questions as to how these stats are found, let me know in the comments below. For definitions of most of these, visit Bill Connelly's Advanced Stats Glossary over at Football Study Hall (a pretty cool site too, btw).

A new addition to this week's Analytical, your football statistics toe dip the Game At-A-Glance:

A quick note: This chart is based on the "New Box Score" from Bill Connelly's book Study Hall. Go read it. Seriously.

This game. Kansas State vs. Iowa State, or college football in general, I swear it is trying to kill me. (And if it doesn't my wife probably will because of my reactions to the game...) After a dominating first few drive for K-State, Iowa State came back and made it a game with a few stellar plays. K-State won by shutting them down in the second half. Oddly enough, when you look at the stats for this game, they all point to a evenly matched game, which Kansas State won through marginal advantages throughout. (Sound familiar?)

And now to full-on shove you in, the Advanced Box Score. We are all nerds, you guys can take it.

Here are the things I noticed: 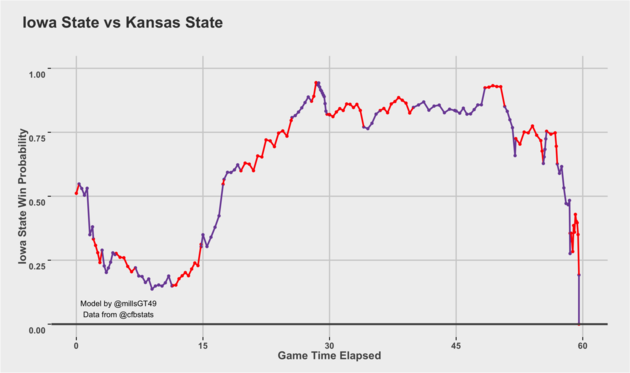 The win probability graph illustrates the flow of the game well. Kansas State won the first quarter right up until the end, while it seemed like Iowa State controlled most of the rest of the game. Kansas State caught up through incremental advantages until scoring and stopping Iowa State on the last drive. 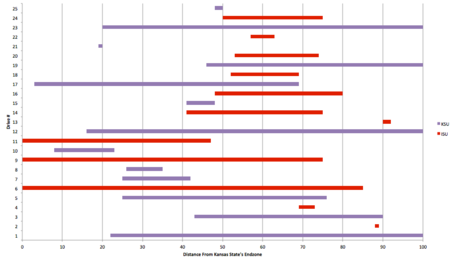 Finally, one more addition to this edition of the Analytical, the drive chart. This chart shows the starting point and result of each drive consecutively throughout the game. Kansas State drives are in purple and Iowa State drives in red. The chart shows a number of wasted drives by both teams, with the only scoring drives for Iowa State coming in the second quarter. After those three, Kansas State did a good job in holding Iowa State to their side of Kansas State's 40 yard line.

Stay tuned; the Auburn edition of the Analytical will be coming out later on this week.