Today is the first of 12 remaining Saturdays without K-State football. To help you cope, Derek has cobbled together a look at each of the Wildcats 12 games in 2014. This week, we take a look at the final game of the season, when K-State travels to Waco for the first time since... well... you know. That game.

Share All sharing options for: K-State vs. Baylor 2014: The Look-Ahead Rewind

Good riddance, Floyd Casey Stadium. You’ve been a bastard for almost a decade. Immune to the wizardry of the windbreaker, defiant of the Big 12’s natural order, your cursed gridiron has been the assassin of hope in Manhattan for far too long. Ever since you teamed with Ron Prince to hand Guy Morriss a victory in 2006, you’ve been nothing more than a tarp-covered pimple on the ass of the Wildcats’ biannual schedule.

Okay, so maybe I’m giving a bit too much credit to superstition and not enough to the amazing job Art Briles has done in Waco. How much do Bear fans love Steve Patterson right now?

Briles is on his way to becoming a bigger pain in the ass than Mike Leach, who Snyder only managed to beat once in five tries.

Briles is 76–44 as the Bears’ head man. Compare that to 35–101 in 12 years of Big 12 membership before he arrived and you get some idea of his impact. Before 2010, Bill Snyder went undefeated in four meetings with Baylor, winning by a combined score of 179–33. But since Briles arrival Snyder is only 1–3 against Baylor, with the lone victory coming by one point in Manhattan in 2011. Briles is on his way to becoming a bigger pain in the ass than Mike Leach, who Snyder only managed to beat once in five tries.

The comparison between Leach and Briles is an easy one to make. Both run fast-paced offenses. Both score a lot of points. But if you look deeper, that’s where the comparisons end. For all the success Leach’s system had in the Big 12, defensive coordinators knew what Tech would do. Throw the ball. In fact, from 2003 to 20091, Texas Tech ranked either last or second to last in the nation in offensive run play percentage.

Briles runs the ball a lot more. Almost 57 percent of Baylor's offensive plays in 2013 were runs. They've averaged over 55 percent in each of the last three seasons.

One might think the trend will reverse itself with the departures of Lache Seastrunk and Glasco Martin. It’s a fun thought, but it isn’t likely. Sophomore Shock Linwood carried the ball eight more times than Martin last year. He turned those eight extra carries into almost 300 more yards and averaged 6.9 per carry. Sophomore Devin Chafin averaged 5.8 yards on 51 carries last season and shows as number two on the depth chart. Third is redshirt freshman Johnny Jefferson, who could be the next great home-run threat out of the backfield.

All this backfield talent and success with the run allows the Bear offense to explode in the passing game. Last season they finished sixth in the country in passing yards per game and came in second in both yards per pass and per completion. All while ranking 44th in pass plays per game and 48th in completion percentage2. Why? The running threat forces linebackers and safeties to stay in the game against three and four-wide sets. The formations are so spread out that slot receivers sometimes line up several yards outside the hashes. This creates favorable one-on-one match-ups. Briles mixes this with play-action fakes and vertical routes which result in big plays and big points.

Tevin Reese mastered the art of outrunning overmatched defenders last year. He’s gone now but every other member of the receiving corps returns. Senior Antwan Goodley leads the depth chart after racking up 1,349 yards last year. As of the spring, sophomores junior Jay Lee and sophomore* Robbie Rhodes are competing for the outside spot opposite Goodley. Senior Levi Norwood locked up one inside spot. The other will go to either sophomore Corey Coleman or senior Clay Fuller. Incoming five-star true freshman K.D. Cannon isn’t expected to redshirt and is likely to find his way onto the field by August. Also, Peter Pope of Our Daily Bears tells me that we shouldn’t sleep on sophomore tight end Tre’Von Armstead. Sporting a 6’6” 270 pound frame with 4.8 speed, it’s not hard to imagine ways Briles might get him the ball.

Of course, all this would mean little without solid offensive line play. All-American guard Cyril Richardson played a huge part in that the last few years, but he’s gone to the Buffalo Bills. In his place steps junior Laquan McGowan. According to Pope, McGowan’s nickname is McMountain and it’s easy to see why. He stands 6’7” and weighs in at 385 lbs, making him two inches taller and a seven-year-old-child3 heavier than Richardson. Junior Spencer Drango suffered a back injury last season but should make a full recovery. If he does, he and McGowan will make up the left side of the line. Sophomore Kyle Fuller is the only other new face on the line, stepping in to replace outgoing center Stefan Huber. Junior Desmine Hilliard returns at right guard and Troy Baker — the lone senior of the group — will play right tackle.

And then there’s Bryce Petty. Do I need to say anything more? Okay, I will. Petty threw for 4,200 yards, 32 touchdowns and three interceptions last year. He won Big 12 Offensive Player of the Year and finished seventh in the Heisman vote. With a year of experience and plenty of eyes watching in 2014, he’ll have a solid chance to finish first. 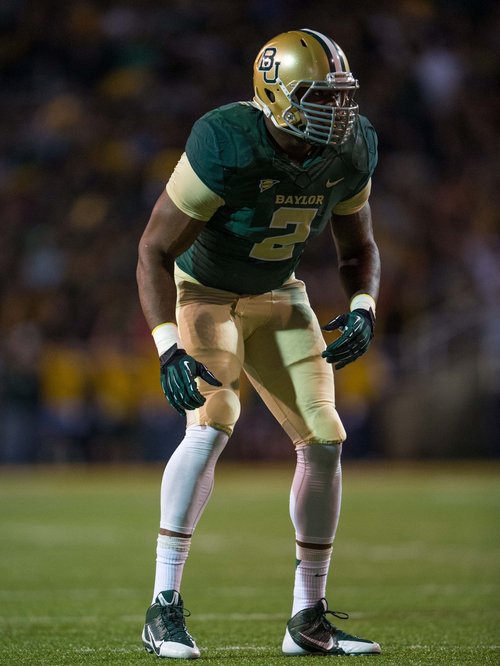 According to Peter Pope, we should fear Baylor's defensive front, led by Shawn Oakman.

The bevy of returning talent on the Baylor offense might make one forget about the defense, which isn’t near as lucky. Seven starters from last year’s defensive squad will need replacement. Peter Pope isn’t at all worried about the defensive line, saying they look to be dominant. Junior Shawn Oakman leads the unit at right end. At 6’9” and 280 pounds, expect Oakman to be a force. Reports out of spring ball described him as unblockable and ESPN’s Jake Trotter expects him to compete for All-Big 12 honors. Junior Jamal Palmer replaces All-Big 12 end Chris McAllister on the left side. Sophomore Andrew Billings locked up the starting spot at nose tackle but returning starter Beau Blackshear still has to beat out sophomore Javonte Magee. Magee was a highly touted recruit in 2012 but took last year off due to personal reasons. Pope also says to keep an eye out for Suleiman Masumbuko (thank you, copy and paste) as a contributor on the interior line.

Behind the line, it’s a lot of question marks. Outside of senior linebacker Bryce Hager, there are no returning starters. Sophomore Aiavion Edwards won the weak side starting spot in the spring but he isn’t safe just yet. Rumor has it redshirt freshman Taylor Young has quite a nose for the ball and might see significant snaps. The defensive backfield has some big shoes to fill with the exit of Ahmad Dixon. Sophomore Orion Stewart won Dixon’s old spot at deep safety and Briles seems quite happy with him. Juniors Terrell Burt and Terrance Singleton show as cover safety and corner, respectively. The other corner spot is a toss-up between sophomore Xavien Howard and junior Chris Sanders. Senior Collin Brence rounds out the defensive backfield in the nickel slot.

Most early Big 12 rankings have the Bears ranked second behind Oklahoma. Other than some questions in the defensive backfield, it’s hard to find any argument. Only three of BOTC’s nine writers picked the Wildcats to win in Waco on December 6th. By then, the inexperienced defensive backfield will have 11 games under their belts. Tyler Lockett is still Tyler Lockett and Jake Waters is Jake Waters, but without a running game, that won’t mean a lot. If the new athletes on the K-State defense live up to the billing and slow down the Bears attack, an upset isn’t out of the question. But Waco is still Waco, with or without Floyd Casey Stadium.

1. These are the only years I had access to the stats, but judging by the fact that Washington State is no better these days, I assume 2000-2002 is no different.

2. All rankings come from TeamRankings.com, which includes data ONLY from games involving two FBS schools.

3. Based on very little research, I found that the average healthy seven year old weighs somewhere around 55 pounds.

*A previous version of this preview had both Jay Lee and Robbie Rhodes listed as sophomores when Lee is actually a junior.