Hours before Nick Saban was possessed by the soul of some long-dead NFL Europe special teams coordinator and elected to attempt a 56 yard field goal with his true freshman backup kicker, a sack race was held in Lawrence, Kan.

To entice people to Memorial Stadium to watch the sack race, the organizers teased would-be spectators with the promise of a football game. The game was played, and managed to slightly outrank the sack race in the memories of those who attended.

OK, so maybe it wasn't that bad, but it definitely faded into the background.

Hate Week 2013 was huge. It was historic. It was a day you'll tell your grandkids about. They'll ask something like "Where were you when Chris Davis returned that field goal back?" and you probably won't answer with "I DIDN'T SEE IT BECAUSE I WAS SO WASTED FROM CELEBRATING THAT AWESOME SUNFLOWER SHOWDOWN!"

It was the undercard's undercard in a weekend full of marquee heavyweight bouts.

You won't answer that way, in part because no self-respecting grandparent would say such a thing. But mostly because the Sunflower Showdown wasn't awesome. It was the undercard's undercard in a weekend full of marquee heavyweight bouts. It occurred somewhere in the ether between Marcus Mariota to Josh Huff and Devin Gardner to Tyvis Powell.

There were a few things worth remembering and some folks might be inclined to read about them. So here's a rundown. 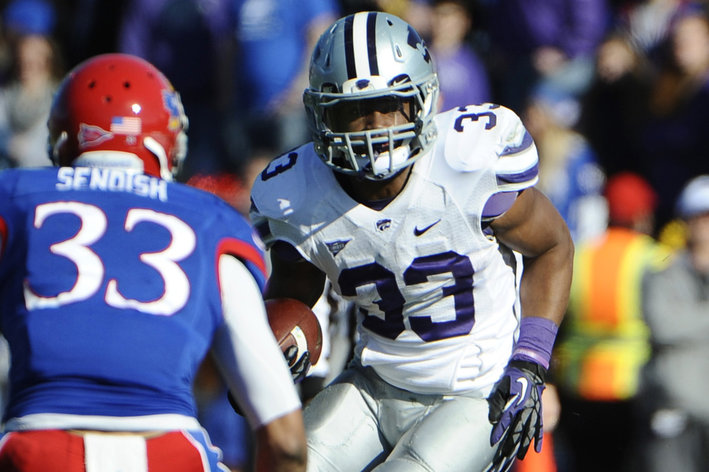 John Hubert was so inspired by the track around the Memorial Stadium field that he proceeded to run an eighth of a mile right through the Jayhawk defense. Hubert wrapped up his final regular season with 220 yards on 30 carries, one of which went for a 41 yard touchdown.

Zach Trujillo and Glenn Gronkowski each caught touchdowns on versions of the same run/pass option play K-State has run all year long.

Different formations, but the same result. Jake Waters found each of them wide open down the field after faking a run.

Outside of those two passes, Waters had a pretty uneventful day. The KU defense held Tyler Lockett and Tramaine Thompson in check for most of the game, leaving it up to Hubert to carry the load. Waters finished the day 10 of 21 for 160 yards and an interception. He also did this:

All in all, the offense did enough to win, but it wasn't pretty. They averaged 4.5 yards per play which is well below their season average of just over six. The KU defense gives up 5.8 YPP on average for the year, which ranks 85th in the country.

The Wildcats did score 31 points, but their average starting field position was five yards from Jayhawk territory. Part of the problem could be attributed to 50 yards in offensive penalties, but this team is capable of doing more with that kind of field position.

The other side of the ball did a little better. 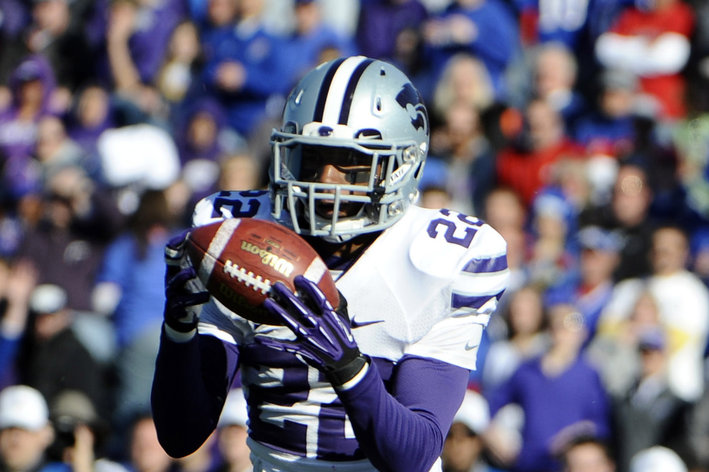 Last week there were some who were less than impressed with the performance of replacement safety Dylan Schellenberg. Schellenberg responded this week with an interception, a fumble recovery and nine total tackles. He's still no Ty Zimmerman, but he's doing his part.

Schellenberg's fellow safety Dante Barnett was the star of the day with a pair of interceptions and a fumble recovery. Dorrian Roberts also picked off a pass as the defense finished with six forced turnovers. In fact, after allowing KU to score a touchdown and field goal in consecutive drives to end the first half, the Wildcats forced turnovers on each of the Jayhawks first four drives of the second half. Unfortunately, the offense turned those turnovers into only 10 points.

Kansas averaged just over three yards per play with an average starting field position at their own 26 yard line. James Sims was held to 82 yards on 22 carries while Jake Heaps and Montell Cozart managed only 4.2 yards per pass attempt.

Blake Slaughter led the team in tackles with 15 while Ryan Mueller finished with six, including a sack and a forced fumble. Marquel Bryant turned in two sacks to lead the team, and redshirt freshman Demonte Hood did this:

Some offenses are world-beaters. Others bring to mind modified versions of Yakov Smirnoff jokes.

To put all of this in perspective though, the Jayhawk offense ranks 119th or lower in yards per game, points per game and yards per play. Some offenses are world-beaters. Others bring to mind modified versions of Yakov Smirnoff jokes.

"In Lawrence, Kan., world beats you!"

But let's not diminish the defense too much. Six turnovers means something.

Now we play the waiting game 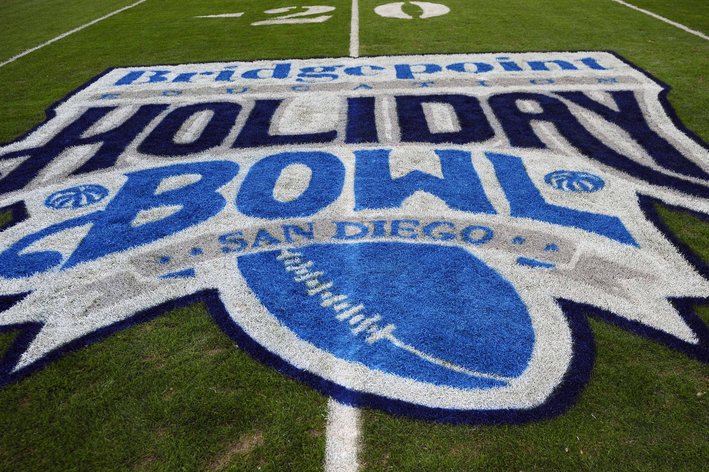 The game wasn't pretty or in any way memorable outside of Hubert's first game over 200 yards. In a weekend where a 42-41 shootout between the Buckeyes and Wolverines took a backseat to other action, there's no doubt this game will fade into the cobwebby regions of our brains and perhaps live on as only a footnote to memories of other games.

The regular season is done. All that's left to do now is wait. With the win over KU, the Wildcats finished fifth in the Big 12, most likely placing them in the Holiday Bowl on Dec. 30. Since 2010 the Holiday Bowl matches the fifth place Big 12 team with the third place Pac 12 team, meaning a rematch of last year's Fiesta Bowl is likely to happen in San Diego.

Bill Snyder is 3-0 all time in the Holiday Bowl and Oregon is certainly a different team than they were a year ago, so if it does come down to the Ducks and Wildcats part two, there may be different results.

It certainly can't be any less interesting than this edition of the Sunflower Showdown.