They Can't Do Any Worse Than the Pitt in Pennsylvania: Last night's game between Cincinnati and Pittsburgh was a high-quality satirical farce worthy of the greatest comedy achievements in college football history. The Cincinnati marching band member who lost the mouthpiece to his trumpet when he tumbled down the stairs coming onto the field for pregame? He was the worst thing to happen to the Bearcats all night long. Well, maybe not. More on that in a moment. Pitt's defense was woefully laughable, especially in the first quarter, as Cincy took an early lead which they were never in any danger of relinquishing. And thanks to Pitt, Munchie LeGeaux and Ralph David Prescott Winston Vanderbilt Abernathy IV are now household names in CFB Nation.

Of course, part of the reason that lead was secure is that Tino Sunseri was hopelessly overmatched in the face of real live human beings wearing differently-colored uniforms. As bad as Pitt's defense was, the offense may have been even more hapless. Right now, John Swofford is desperately looking through the paperwork on his desk, trying to find his receipt from Big East Football and Novelty Supply. Unfortunately, he failed to notice the "NO RETURNS EVEN IN THE EVENT OF DEFECT" notice. If he'd just invited Pittsburg-no-H State, he could at least claim a defending national champion.

From the Hilarious to the Deadly Serious: Alabama recruit Deon Johnson has been arrested on charges of second-degree rape and sodomy. In Alabama, second-degree rape means having sex with someone between the ages of 12-16 when the accused is 24 months (or more) older than the victim. You know what sodomy means, no matter what state. I don't think I'm being reactionary when I say that if the charges are true, I hope his career is over.

Back to the Absurd: I promised you the worst thing to happen to the Bearcats. Behold:

Ever wonder what a Bearkat looks like? Now you do. Pitt @ Cin, 8p Big East IMG Net. bigeast.tv #bigeastfb twitter.com/jrooke0722/sta…

God Money I'll Do Anything for You: The Big 12, ESPN, FOX, the Green Party National Committee, your mom, Kim Kardashian, and Joe Schad announced the signing of a 13-year $26M deal for the rights to pretty much everything. Each school will retain the rights to one home "conference-controlled" football game and four home men's basketball games to distribute as they see fit, with the option of returning those rights to FOX for airing on Big FOX, Little FX, or the FSNs. A minimum of 25 Big 12 home football games per season will air nationally on either ABC, ESPN, FOX, or FX, a minimum of six of those airing on Big FOX. Outside of football and men's basketball, ESPN and FOX retain the right to select ANY Big 12 home contest in any sport for national airing; anything they pass on reverts to the individual schools.

In other words, Texas just left us another pile of cash on the nightstand and asked if we'd be available to beat them on December 1. 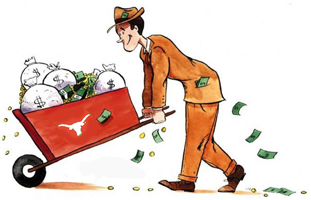 Speaking of Texas: They finally have a Thanksgiving rivalry after having suffered without one for lo these long nine months. At 6:30 GOTZ Turkey Day night, they'll take on the Frawgs on ESPN, and that will be their Thanksgiving enemy going forward.

Aggies Still Gonna Aggie: You've already seen it, I'm sure. But if you haven't, over the summer Texas A&M apparently managed to win the 1919 and 1927 National Championships, the 1997 and 2010 Big 12 Championships, MegaMillions, the 1963 Academy Award for Best Supporting Actress, and the 1994 American League Central Division title.

Big Mess: The Big East might -- might -- be considering a name change. Don't bet on it, as it's just a floated idea, but at least we've got confirmation the conference is kinda, sorta, thinking about it.

Tonight: Utah at Utah State, tonight at 7 on the Worldwide Leader. Both teams are coming off big wins over FCS opponents last week, and Utah's favored by a touch. Could be an upset, but man, you just never know with Utah State, who were the most exciting losers in all of college football last year.

Tomorrow: Here's your national television breakdown, with my picks italicized (and if you want me to analyze a given game, ask a question), plus the Big 12 schedule bolded (all times Central, of course):

West Virginia and Baylor are pansies and won't play today. The ABC* games are regional splits with ESPN2; most of you will get Air Force/Michigan on ABC and USC/Syracuse on ESPN2; that coverage area includes Michigan, Wisconsin, Illinois, Minnesota, Iowa, North Dakota, South Dakota, Nebraska, Kansas (except Coffeyville), and Colorado; most of Ohio, Indiana, Missouri, Wyoming, and New Mexico; and parts of Montana, Texas, Arkansas, Kentucky, West Virginia, and one little drip of Pennsylvania. Everyone else (including me) gets the USC/Syracuse game on ABC, with Air Force/Michigan on ESPN2.