Football Trek: The Next Generation

Share All sharing options for: Football Trek: The Next Generation

We break away from our normal programming today to bring you this utterly stupid diversion:

FOOTBALL TREK: THE NEXT GENERATION 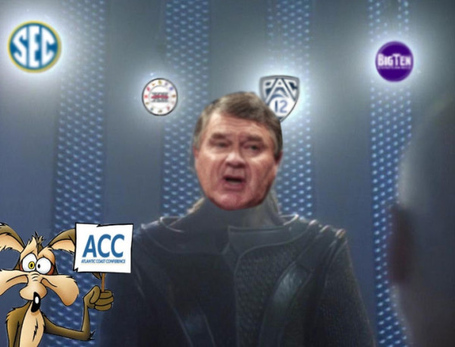 SCENE: JACK SWARBRICK, Athletic Director of the USS Notre Dame (NCC-1988), has been captured by secret agents of the ACC. Their goal: to ferret out, by any means necessary, the Notre Dame's mission and if possible to turn the Notre Dame and its crew against the United Football Patriarchy. To this end, Swarbrick has been detained, drugged, beaten, and is now undergoing severe psychological torment as he is interrogated by the ACC's brutal inquisitioner: GUL "JOHN" SWOFFORD.

Swarbrick is manacled to a chair, being overseen by a technician dressed in a fuzzy tiger costume with giant lidless and hyperactive eyes. Swofford sits behind his desk, and checks his iPad at each response.

Swofford glances at the technician, nodding.

SWOFFORD: He's ready. Keep him at this level.

Swofford turns back to Swarbrick.

SWOFFORD: What is your current assignment?

SWOFFORD: How many others were part of this mission?

SWARBRICK: One hundred and twenty-four.

Swofford begins reciting the names of every athletic director in Division I FBS. We fade out, then fade back in as the list ends.

SWOFFORD: What are the Notre Dame's intentions as regards realignment?

Swofford glances at the tech.

SWOFFORD: Eight-Ball, Increase the level to point three one.

Swarbrick is now completely out of it. Eight-Ball has departed. Swofford continues questioning the Notre Dame's Athletic Director.

SWOFFORD: We need to know the Notre Dame's intentions as regards realignment.

SWARBRICK: You've drugged me. You have to know I have already answered every question honestly.

SWOFFORD: We have gone to great lengths to lure you here, because we know that in the event of more realignment, the Notre Dame will be the lynchpin of the entire operation.

SWARBRICK: Then it seems you have more knowledge of the situation than I do.

Swofford sighs, and presses a button on his desk. Guards enter and forcibly haul Swarbrick to his feet. Swarbrick struggles, but he is manacled and chained to a bar hanging from the ceiling.

SWOFFORD: Wasted energy, Jack. You might wish you hadn't used it in a pointless effort.

Swofford and the guards exit; Swarbrick begins to pass out.

Swofford has returned, and is seated at the desk with a glass of sweet tea when Swarbrick awakens. Swofford takes a drink; thirsty, Swarbrick watches.

SWOFFORD: I would imagine. Well. Time to move on.

Swofford takes an iPad out of his desk.

SWARBRICK: I've told you what I know.

SWOFFORD: I'm sure you have.

Swofford points up toward the ceiling, where four glowing icons -- the Big 12, SEC, Pac-12, and Big Ten logos -- are shining.

SWOFFORD: How many lights do you see there?

Swarbrick looks up, then back down.

SWOFFORD: Strange. I see five. Are you quite sure?

Swofford returns his attention to his desk, and the iPad. He begins toying with it.

SWOFFORD: Perhaps you're aware of the incision on your chest. While you were under the influence, we implanted a device. Quite remarkable, really. By entering commands in my iPad, I can produce pain in any part of your body. I don't enjoy this, but I must demonstrate.

Swofford taps on the iPad, and suddenly Swarbrick is washed with memories of the Notre Dame-Michigan game of 2012. Swarbrick tries to scream, but cannot. Finally, the memories subside, and Swarbrick slumps in his chair.

SWOFFORD: Surprising, no? Most people think they can stomach it, but they're truly unprepared for the reaction. (pause) That was the lowest setting.

Swarbrick gasps, struggling to gather himself.

SWARBRICK: I... know nothing... about realignment.

SWOFFORD: I told you I believe you. I didn't ask about realignment. I asked you... how many lights you see there.

Swofford looks at Swarbrick in confusion, then looks back at the lights, then back to Swarbrick.

SWOFFORD: I don't understand how you can be so mistaken.

Swarbrick is in a heap on the floor, unconscious. He begins to stir to a tapping sound, presumably Swofford playing with his iPad. He opens his eyes, and finally focuses on Swofford, casually eating while watching footage of old football games.

Swarbrick crawls to the table and sits.

Swofford turns the iPad so that Swarbrick can see it. Swarbrick's face wrinkles in disgust.

SWOFFORD: Wonderful! I do so love an emotional reaction to football. It's so... rare that I get to see it.

SWOFFORD: I remember the first time the ACC had competitive football. It was 1981, and I was living in a hovel in Chapel Hill. Survival was hard, but Clemson... Clemson gave us hope, only to have it SNATCHED away when your evil cohorts conspired to take away their glory.

SWARBRICK: Danny Ford was a cheater.

SWOFFORD: What do you mean?

SWARBRICK: You know what I mean. Clemson cheated, and your denials are... embarrassing.

SWOFFORD: I fail to see where this is leading.

SWARBRICK: Swofford, when I look at you now, I don't see a powerful commissioner... but a small man weeping because he was unable to sign a lucrative television contract.

SWARBRICK: In spite of what you have done to me... you're pathetic.

SWOFFORD: Swarbrick, stop or I will turn this on and leave you in here all night --

He stops, seeing the hint of a smile on Swarbrick's lips.

SWOFFORD: What are the Notre Dame's plans for realignment?

Swofford taps "Navy" on his iPad. We see him do this; we don't see Swarbrick's reaction.

SWOFFORD: There are five lights. How many do you see now?

SWARBRICK'S VOICE, strained: You have no money... weak and helpless... you cannot harm me...

In the interim, the Notre Dame has defeated the ACC, aided by the defection of key ACC ships of the line. GUL BEEBE, outgunned, has been forced to tender the ACC's surrender. Swarbrick tries to focus. How many lights does he see? The four he is sure are there? Does he see a "Sun Belt" and a "Mountain West", too? A "WAC" and a "MAC" and a "CUSA"? He's becoming unsure. Then Swofford RE-ENTERS.

SWOFFORD: I've received word. There's been a battle. The Notre Dame is burning in space.

SWOFFORD: There is no further need for information from you. Our plan was a success despite your refusal to collaborate. You could have saved yourself if you'd just given in at the beginning.

SWOFFORD: There is no such person. (pause) The word will be that you downgraded your program to Division III. No one will ever know that the Notre Dame still plays football, and you will remain here with us. For a long, long time. You do have a choice, however... you can live out your life here in misery, subject to my whims... or you can live in comfort, wanting for nothing. It's all up to you.

SWOFFORD: Nothing, really. Just tell me how many lights you see.

Swarbrick, deflated, slumps, his eyes trying to focus on the lights. We hear the approach of footsteps, and Swofford's voice becomes more insistent.

SWOFFORD: How many lights? You have to tell me. The guards are coming. Don't be a fool! HOW MANY?

BEEBE: You told me he would be ready to go.

SWOFFORD: We had some unfinished business.

BEEBE: Get him cleaned up. A ship is waiting to take him back to the Notre Dame.

Swarbrick gets to his feet, a little unsteady. Gathering himself, he takes two steps toward Swofford and meets his gaze directly.

SWARBRICK: THERE. ARE. FOUR. LIGHTS.