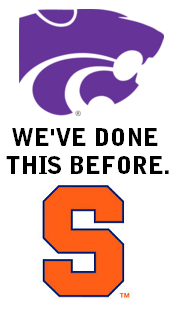 If you recall, in 1972 and 1973 the Wildcats had suffered defeat at the hands of the Missouri Valley. 1974 actually ended the same way, albeit in a different tournament; the Cats fell to Bradley in the first round of the Collegiate Commissioner's Classic, and Lon Kruger's career came to a close after capturing Big Eight Player of the Year honors. Also gone were second-team all-conference selection Larry Williams as well as Danny Beard, who'd been a key component of those two tournament teams.

Indeed, coming into the 1974-75 season, the entire starting lineup turned over. Still, Kansas State was a force to be reckoned with, having finished first or second in the league every year save one since 1968. Sure, it was an entirely new cast, but Jack Hartman could surely do something with them, right?

Well, yes, as it happened, he certainly could, even though he wasn't even sure he had a team that could finish with a winning record.

The season began with a four-game homestand, and the Cats took all four, victimizing Montana State, Southern Methodist, Texas Tech, and Hofstra. A weekend road trip to the Grand Canyon State was not so pleasant; the Wildcats were drummed by Arizona State, and lost a close one the next night in Tucson to #17 Arizona. The next week, the team only had one game, a trip to Houston in advance of the Big Eight Holiday Tournament. The Cats squeaked out a 91-90 win, and returned home to prepare for the tourney.

Missouri was dispatched in the opening round, but an 18-point defeat to Iowa State pushed K-State to the third-place game, where they thumped Nebraska. After the winter break, a 14-point loss at Tulane was a downer, but they closed non-conference play at home by knocking off Arkansas in overtime with freshman Mike Evans sinking the two free throws to ice the win.

Conference play began with an ugly loss in Lincoln. The team then ripped off a solid winning streak, however; Colorado was swept, Iowa State and Oklahoma State dispatched on the road, and Oklahoma, Missouri, and #20 Kansas at home. A loss at Oklahoma was followed by a win at home over Nebraska, and K-State clung to first place at 8-2 leading to a tussle in Lawrence with 7-3 Kansas.

It was an ugly rout. Rick Suttle scored 26, helped by 15 from Norm Cook and 13 from Donnie Von Moore, and the Jayhawks destroyed K-State 91-53 to claim a share of first place. The Cats rebounded to knock off Iowa State at home, and then traveled to Missouri; again, they stumbled, Willie Smith scoring 29 points to offset 19 from Carl Gerlach and 18-point performances by both Evans and Chuckie Williams as Missouri won 83-75. That loss left K-State and Missouri tied for second, a full game behind Kansas. The Cats then knocked off Oklahoma State in the season finale while Missouri lost to Colorado. Alas, the Jayhawks defeated Oklahoma to claim the Big Eight title, but for the first time in history it didn't matter: as the second-place finisher in the Big Eight, the Wildcats were in the newly-expanded NCAA Tournament, one of the first group of teams to be allowed to compete despite not winning their conference.

K-State opened with a first-round game against 11th-ranked Pennsylvania. It was effectively a road game, being played in Philadelphia, and Penn was the prohibitive favorite. But K-State rolled up a 40-28 lead at the half, and even extended it to 17 points before the Quakers started putting together some runs. Still, Williams and Gerlach both scored 20, and the Cats held on for a 69-62 win. In the other Philadelphia game, Syracuse got past La Salle 87-83 in overtime.

That sent K-State to Providence for the East Regionals. The first obstacle was Boston College, 82-76 winners over Furman in the first round. It was a close one at halftime, the Cats holding a 39-36 lead. Williams erupted, though; he scored 24 of his 32 points in the second half, and with nine minutes to go K-State was up 15. Boston College went into the full court press then, and managed to keep the Wildcats from even putting up a shot for over four minutes; with 2:40 to go Wil Morrison sunk a layup to bring the Eagles to within two. But Williams then broke free for a couple of baskets, and Gerlach, who finished with 20, iced the game with a three-point play. Once again, K-State was in the Elite Eight.

Their opponent was Syracuse, who had surprised everyone by grabbing a 78-76 win over North Carolina. The teams battled back and forth, K-State holding a 38-36 halftime advantage. As the game wound down, things got more tense, and although clinging to their advantage, K-State was in foul trouble. Williams sunk a 20-footer from the corner with five seconds to go to give K-State a 76-74 lead, and it looked like the Cats might be on their way to San Diego. But Jim Williams dashed down the floor after the in-bounds and flipped a perfect feed to Rudy Hackett beneath the basket, and as the buzzer sounded his pitch from five feet out slipped through the hoop to send the game to overtime.

After trading baskets, Syracuse ripped off a 6-0 run; Evans and Bob Noland then fouled out in succession, and what had been seconds from a trip to the Final Four turned into season's end as the Cats succumbed 95-87. Williams, who'd given all he had and finished with 35 points, was named the MVP of the regional in a losing cause.

A season that started with Hartman being uncertain as to whether he even had anything to work with had to be marked down as an unqualified success despite the loss. Hartman earned his first Big Eight Coach of the Year honor in the process, and Evans was the league's Newcomer of the Year as well as a second-team all-conference selection. Williams was named to the first team.

Despite the arrival of Mike Evans, however, the curve was turning downward, and because this is the only season in our countdown which involves him we need to discuss what happened. The following season, despite first-team performances from Williams and Evans, the Cats were not rewarded with an NCAA bid even though they finished in second place, a game back of Missouri. They were knocked out by Kentucky in the first round of the NIT.

In 1977, they did return to the NCAA tournament after winning the Big Eight regular season and tournament titles. Evans and Curtis Redding were named to the first team, joined by Larry Dassie on the second, and the team swept the league honors: Hartman with his second Coach of the Year award, Evans as Player of the Year, and Redding as Newcomer of the Year. But after defeating Providence, the Cats were upended 67-66 in the Sweet Sixteen by Marquette. A miserable 1978, saved only by Evans winning Player of the Year honors a second time (and earning a third-team All-America nod), left 1975 as the actual high point in the career of one of the greatest Wildcat ballers of all time.

Tomorrow: an article I hardly even need to write, but must.