Coming into last Saturday's game against the Miami Hurricanes, one of the biggest questions for K-State was how it would handle Hurricane running back Lamar Miller. The sophomore Miller was averaging more than 150 rushing yards per game before last Saturday and, given K-State's well-documented struggles with the running game last season, questions remained as to how the Wildcats would match up with a solid running attack after games against body-bag teams Eastern Kentucky and Kent State.

While one game does not a season make, K-State's defense answered its critics by holding Miami as a team to 139 yards rushing on Saturday. For his part, Miller had 106 net yards rushing, but 59 of those came on one play so, for the most part, K-State kept the speedy Miller in check. The play-by-play broadcaster hinted that Miller may have been dinged up, and from watching the broadcast it appeared he may have been right. But if he was, it didn't show up in Miami's first two games the way it did last Saturday. 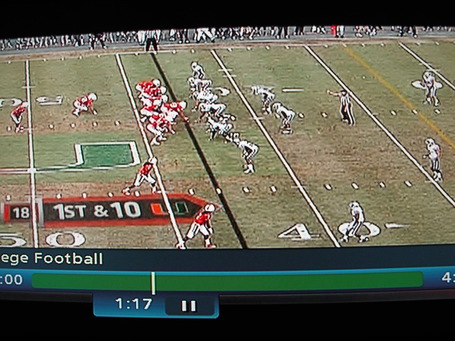 In this play, Miami faces first and 10 from the K-State 43. The Hurricanes line up in 21 personnel, with quarterback Jacory Harris under center and the running backs aligned in an offset "I" formation to the strong side (left). Miami's two receivers are split right. For its part, K-State is in its base 4-3 alignment, but with the extra defensive back lined up at the line of scrimmage on the weakside. K-State's strong side linebacker is lined up on the line of scrimmage just over the strong side DE. 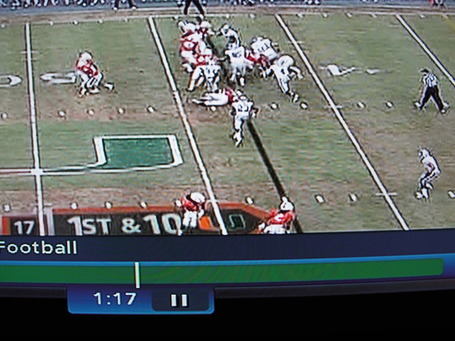 Harris takes the snap and turns to hand to Miller on a sweep right. As you can tell, Miami's line got no push and Arthur Brown is flowing freely to the ball from his middle linebacker position. K-State's strong side defensive end has gotten upfield and will force Miller to turn back to the middle... 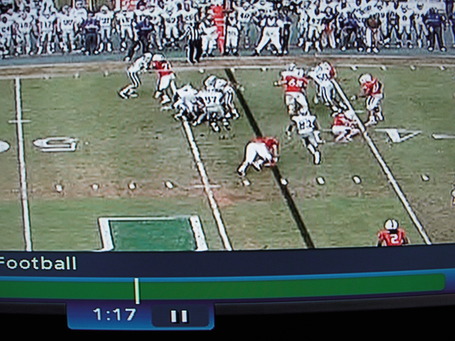 ...where he'll be rudely introduced to Brown, resulting in a tackle for loss on the play. The speed we've seen from Brown, Tre Walker and Emmanuel Lamur at linebacker has resulted in much better running-game containment thus far this season. While everyone talks about Robert Griffin III and his magical passing ability, the Baylor Bears rank 15th nationally in rushing offense, picking up more than 240 yards per game. K-State needs to limit the Baylor rushing attack without committing extra men to the box in order to have a fighting chance against Griffin and Kendall Wright. If the defensive line can hold its ground like it did in this play and allow Brown, Walker and Lamur to roam the field and make tackles, the defense has a fighting chance to slow down the Bears.