We've all heard about Bill Snyder's innovative use of Michael Bishop as a running quarterback using the zone read. As usual when K-State plays, we saw several classic examples of the zone read run by Collin Klein against Miami.

For examples, hit the jump and check out the following series of photos. The first play occurred in the first quarter against Miami, with K-State facing a second down with four yards to go from the Miami 16 yard line.

*As an aside, while I was typing up this post, I was listening to EDSBS Live, and while interviewing Bruce Feldman, Spencer Hall described the offense Bill Snyder and K-State are currently running as a "1988 offense." Of course, he's off by a decade, and he (understandably) did not watch the entire K-State/Miami game, because K-State continues to add wrinkles to its offense, as we'll see in Film Study later this week. 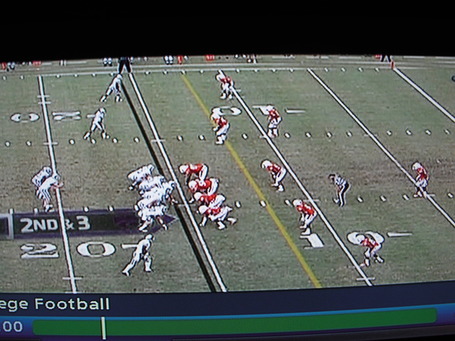 K-State is in its preferred 11 personnel, with Klein in the gun and John Hubert to his left. Tight end Andre McDonald is lined up to the right. Chris Harper is split wide to the strong side, with Brodrick Smith and Sheldon Smith wide to the left. Miami is in a base 4-3 alignment, with its weakside linebacker covering the slot receiver and safety help immediately behind. The strong side safety is 10 yards deep, leaving Miami with surprisingly few players in the box for a second and short. 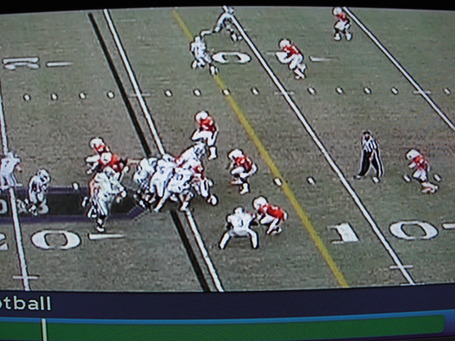 K-State's left tackle and left guard are pulling to the strong side, and Klein has read that the weakside defensive end is moving upfield toward him, and the defensive tackle is not in position to catch Hubert, so he gives the ball to Hubert and carries out his fake. The center, right guard and right tackle have sealed Miami's defensive lineman toward the middle of the field, and Harper is setting up the defensive back for an inside seal. Miami's strong side safety has read the run and is drifting toward the line of scrimmage, but still isn't sure if he will break to his right to chase Klein of if he will veer left for Hubert. 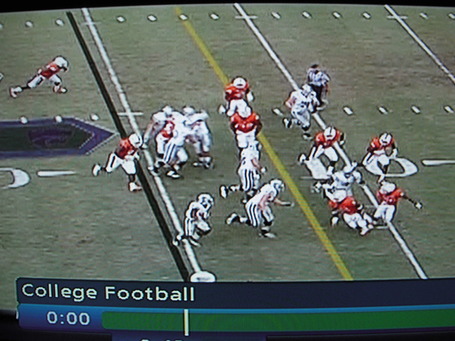 Harper has not sustained his block, but the defensive back is off-balance and about to fall down. Meanwhile, Hubert has a convoy ahead of him and, at this point, a first down is assured. However, two crucial mistakes will occur here that ensure this play will "only" pick up a first down, and not potentially be broken for a touchdown. First, Hubert charges ahead and outruns his offensive lineman, who is going after the falling-down defensive back. Had Hubert slowed down and ran to the back of the outside OL by turning back to his left, he could have picked up a block from his inside OL on the middle linebacker, and possibly sprung loose for a touchdown. Second, the lead offensive lineman continues ahead to block a player who is already falling down, rather than turning inside to find the middle linebacker or one of the weakside defensive backs. Which leads to the next frame... 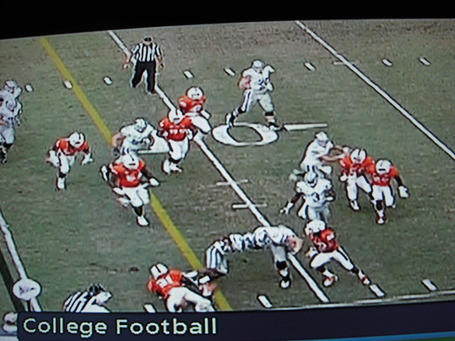 ...where the falling-down defensive back has managed to trip up Hubert, allowing Miami's strong side safety to move in and finish the play. Hubert picked up seven yards to the nine yard line, which would set up a K-State score two plays later.

A little later, in the second quarter, K-State would run another variation of the zone read. On third down and two yards to go from the Miami 38, K-State again lines up in 11 personnel, with Hubert and tight end Travis Tannehill to Klein's left. 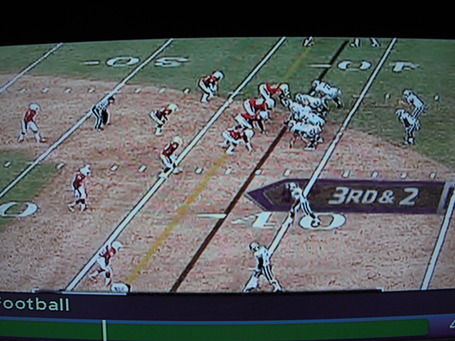 Shortly after the above frame, Miami's weakside and strong side linebackers would sneak up to the line of scrimmage, tipping off a blitz. This had to leave Klein drooling, knowing the play call. 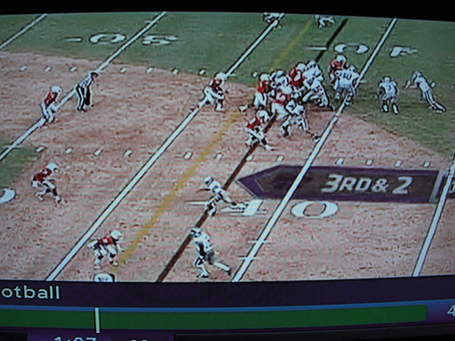 Klein takes the snap and extends the ball to Hubert, who is running parallel to the line of scrimmage. The offensive line turns to its left to seal the defensive line to the strong side. The strong side tackle pulls to the weakside and kicks out Miami's blitzing weakside linebacker, opening up a gaping hole for Klein. Frankly, Klein could have given the ball to Hubert and the play probably would have achieved a similar result. Instead, he chose to allow Hubert to lead block for him. 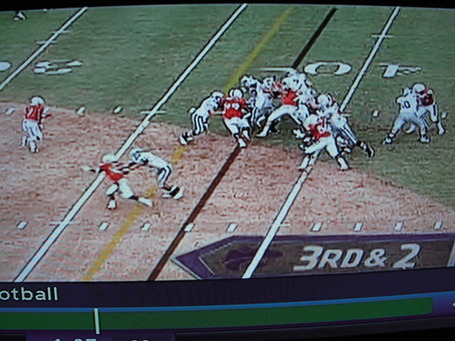 Klein breezes through the hole while Miami's middle linebacker gets caught up in the midfield congestion. Miami's strong side safety sees what is happening and breaks hard to his left to pursue Klein... 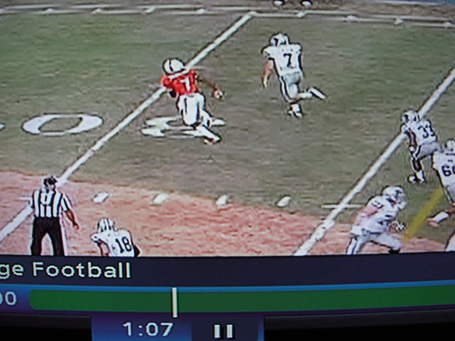 ...and he gets there, barely preventing a K-State touchdown.

Is K-State's offense a modern spread where the quarterback throws the ball 40-50 times per game? No, it's not. But go back to the first link, and look at who taught the Urban Meyer's of the world this system. Snyder's attack still works, and it works because he constantly tweaks it to add a new wrinkle or two while keeping the same underlying philosophy.