Leave It All On The Field: A Goal Line Stand, In Pictures

Share All sharing options for: Leave It All On The Field: A Goal Line Stand, In Pictures

First let me make clear that what Collin Klein did can not be overstated. At the end, he was a bloodied, muddied gladiator, drinking the blood of his enemies, pillaging their town, and stealing their women. And like the Honey Badger, whose fearsome visage he evokes, he just don't give a--well, in the interest of more delicate tastes, I'll leave my praise of him there.

And yet, there was something equally poetic about what happened inside the two-yard-line at the end. Eleven men, backs to the wall, said to their foes, "This far, and no further." It took them all to turn back the favored opponent: defensive lineman, sacrificing themselves to keep blockers off their comrades; defensive backs grabbing and grasping, swarming and swiping; and linebackers knifing to the ball like sharks to blood. All these men a Purple Swarm of Savagery that simply would not be denied the win on this night.

Am I florid in my description? Certainly. But if any have ever deserved such praise, it was that team--two touchdown underdogs, they--following their own William Wallace into the fight. And those Eleven that rose up and made the Stand.

(Click through the jump, to see The Stand in pictures.)

Play #1: Allen Chapman breaks it up. Underrated, as in watching it again, I think there's no doubt the Miami TE makes that catch if Chapman doesn't get there in time. 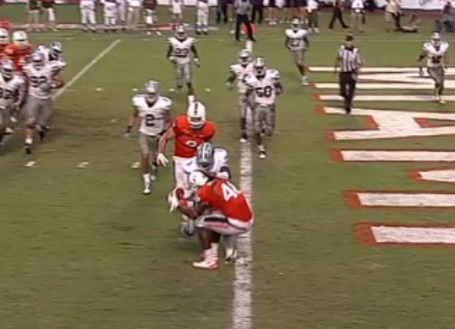 Play #2: Ray Kibble and (I believe) Tre Walker stone Mike James at the line of scrimmage. A moment later, a swarm of Wildcats moved in as well. 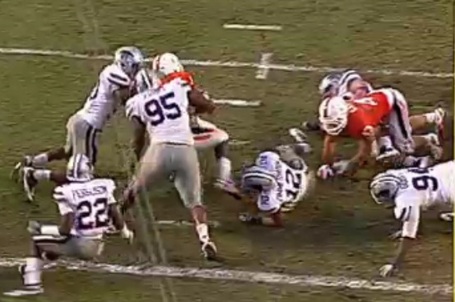 Play #3: This, the penultimate play of the Stand, took two pictures to do justice. The first shows Meshak Williams bowing up to make the initial stop: 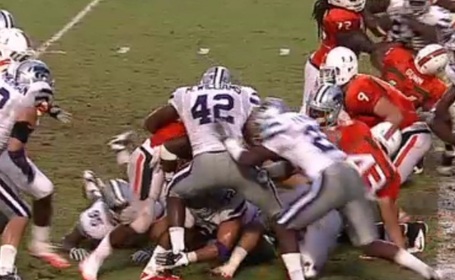 And then the Purple Swarm descending on Mr. James to help Meshak push him back: 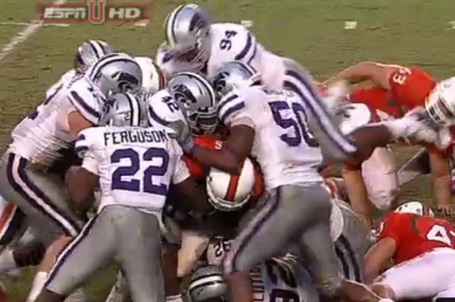 Play #4: And finally, as illustrated in the image at the top of this story, and in this one as well, Tre Walker saves the day, on the final play of the Stand: 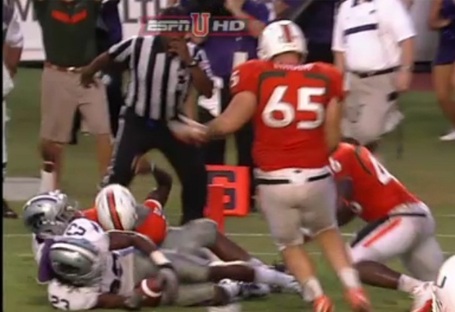 Amazingly, that man in the striped shirt is about to throw his arms in the air. Thank the gods of football that instant replay likes us better than it does Toledo.