Now that the Big 12 has received new life, we need to aggressively promote expansion and stability.  I believe that I have a plan that will help accomplish this, at least from a membership perspective.

Click the jump for my current four step plan.

This needs to happen fast.  The dust is going to settle and settle quickly.  While the Big East is still in chaos, and futures are uncertain, it's time to offer a safe harbor.  We have a fresh Tier 2 rights deal with a big Tier 1 deal coming in five years.  We're most likely going to replace our commissioner and start over with new bylaws regarding revenue sharing.  If the nine remaining schools (The Core) are committed to staying together, we become a legitimate option starting today.  Especially now since the Big East lost two of their biggest TV draws right before they renegotiate rights deals, and their proposed plan to backfill includes service academies, UCF, and East Carolina.

I originally thought Pitt would be available at this point, but hey, who knew the ACC was going to aggressively expand?  If they're off of the table, and WVU is still out there in limbo, give them a firm offer right now.  Like now, now.  They have perennial Top 25 programs in football and basketball.  Sure, they're a little out there in terms of distance, but we'll make it work.  Go get them.

After that, bring in Louisville.  They fit geographically.  As I mentioned in my other post, they have great facilities.  They obviously bring a top notch basketball program and a BCS quality football program.  Go get them, too.

Once that takes place, we'll have eleven teams, and the Big East will obviously be reeling even more.   Now is the time to make my most daring proposal.

Step 2: Offer Notre Dame to join in basketball and other non-revenue sports

If the Big East no longer remains solvent, and the TV money sucks, we may be able to strike up a deal with them to join us as non-football members.  Sure, they probably have sports not all of our schools participate in (i.e. Lacrosse), but you can get creative with stuff like that.  Our rowing team competes in Conference USA.  We can figure it out.

Notre Dame desires independence.  I don't like it, but it is what it is.  There aren't many conferences out there that will accept a basketball/non-revenue sports only member, but we may be a conference that will allow it.  However, I'd strike up an agreement where they are forced to play at least four Big 12 teams per year.  Texas can be an annual game (because of the money it will generate).  After that, if they want to continue their arrangement to play BYU on a near annual basis, they are free to do that as well.  Otherwise, they'd need to agree to play two other Big 12 schools on a yearly basis, and it must be rotated.    Also, at least two of those games, per year, will be a part of our Tier 1 television package.  On top of that, to sweeten the pot, Notre Dame gets access to our bowl agreements outside of the agreement they currently have with the BCS.

Financially, they get to keep 33% of a standard share of TV revenue for every Big  12 team they put on the schedule every year.   So, if they play the minimum four games, they get approximately 33% of a standard cut.  Every game in excess of that that exists on our Tier 1 television platform will be an additional 10%.  If it's on their network, it's 5%.   If they play five games, and three of them are road games on our networks, they get 43%.  If three of them are home games, it's 38%.  The ultimate incentive would be for them to schedule as many games against Big 12 competition as possible.  They also split all bowl revenue with the conference; however, in exchange the Big 12 will absorb their costs.  However, because they have their own affiliation with the BCS, they can keep that money, and we will not cover their costs.

I know that this probably flies in the face of what we're hearing in terms of equal revenue sharing and solidarity, but this is Notre Dame.  It's the cash cow.  We can make it work.  Most of all, we should make it work because they're the flip side to...

Again, I'm aware of all of the talk of equality, solidarity, etc.  But the bottom line is this: you don't want to send a Volleyball team to Provo on a Wednesday.  BYU has competition restrictions on Sundays.  If we invite teams as far east as West Virginia, full inclusion becomes extremely problematic from a travel perspective.  BYU already has basketball and non-revenue affiliation with the West Coast Conference, which is a better fit for them geographically and culturally.  However, they need a BCS AQ conference and we need a team with their pedigree.  If we can split them with Notre Dame, it solves issues with the non-revenues, and we get a good football team out of the deal.

From a financial perspective, they'd get a 66% cut of the TV revenue.  That's more than adequate for twelve weeks' worth of work.   They also get to keep their BYU network, so there's additional revenue streams they can take there as well.

That's it as of right now.  I have thoughts on Tier 3 rights and such, but those can come after we find our twelve teams.  Right now, we need new teams, and we need new leadership.  I say we get aggressive and go for it.

Here is a copy of a map I created showing the potential footprint of this plan.  I'll leave you to chew on this. 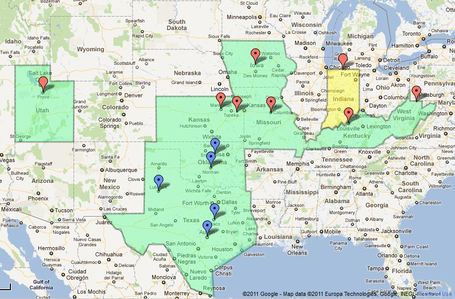