Much More Madness: How 96 Teams Would Look

Share All sharing options for: Much More Madness: How 96 Teams Would Look

I have never really understood why some people are so resistant to expansion. Once the NCAA decided to move to 65 teams, wasn't further expansion inevitable--and even necessary? Yes, there was something beautiful and symmetrical about 64 teams. Moving to 65 teams was gross, pointless, and frankly, stupid. But once the horse was out of the barn, so-to-speak, there's no corralling it again.

When the tournament only expanded to 68 teams after last year, I was actually disappointed. There's nothing beautiful or symmetrical about 68 teams--especially given how it was formatted. The only way to do this symmetrically was to have either the eight true lowest seeds play for the four 16-seeds, or the last 8 at-large teams play for a spot on the 11- and 12-seed lines. As it stands, it's an ugly amalgamation that only a mother--or Mark Emmert--could love.

What is much more symmetrical, as well as exciting and fair, is a 96-team bracket, in which the top 32 teams are given byes into what would then become a true "Second Round." In my scenario, the 32 "First Round" games would envelop what was formerly the NIT, and would be played at home sites. I know the "home site" scenario isn't that likely, but I like it a lot. If it were actually to be used, it would effectively create three different "bubbles": (1) The 8/9 bubble that would determine whether a team got a bye or not; (2) The 16/17 bubble that would determine whether a team played at home in the first round; and (3) The actual "are they in" bubble. These bubbles would in no way be affected by the whims of some "committee", since the entire process of actual selection would be by then numbers alone. The only mitigating criteria to the numbers would be that no teams with overall losing records could be selected as an at-large. This year, that would have bumped the Seton Hall Pirates as the last at-large, and subbed  the Dayton Flyers in their place.

Hit the jump for the actual bracket, as well as a list of the at-large qualifiers, in numerical order, and simulated results for every game in the tournament, as I get the simulations finished.

THE CHAMPION IS CROWNED! 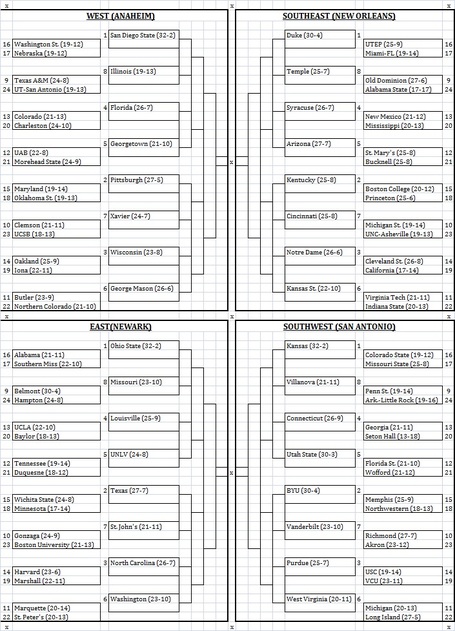 Now, the at-large selections: (bolded, with asterisks are non-Big 6 schools)

Remember, these are in order, using the same Sagarin/Pomeroy/RPI average I used for my previous "By-The-Numbers" hypothetical. Let's just say, the numbers really really hate Scott Drew and Baylor this year. I am currently in the process of using Whatifsports to simulate this tournament. I will post the results to this article as I get them. Thus far, using a more realistic neutral site scenario:

*Washington State blew out Nebraska in their first-round game, 72-57, and--shockingly--UTSA, as a #24 (the functional equivalent of a 16-seed) beat Texas A&M 58-54. More results will be posted as I get them. (I really hope Jacob Pullen's season ends better in this sim than it did in the actual tournament.)

In lieu of posting game-by-game results, I will be posting updated brackets into this post, as I complete each region. The scores are posted right next to the matchup, and either above or below the next round. 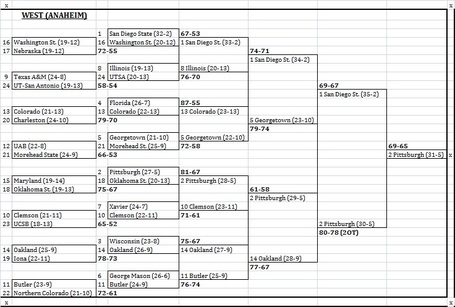 And now for the money bracket: K-State's Southeast Region. I swear I didn't mess with this at all. The Whatifsports sim evidently liked the Cats this season, as we kind of rocked this bracket. I even did a best-of-five format in this bracket, just to make certain it was "fair." Here it is: 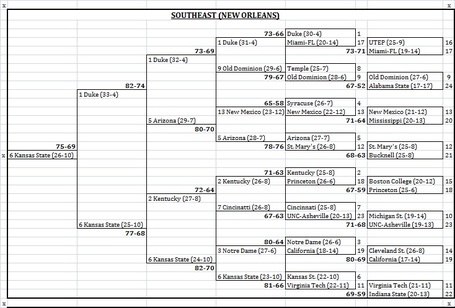 Yes, the Whatifsports simulation has Jake and the crew going to the Final Four!

So now we proceed to KU's Southwest Region. I obviously didn't mess with this at all. The simulation was entirely chalky, except for the first round, where a couple of big upsets happened. Here's the bracket: 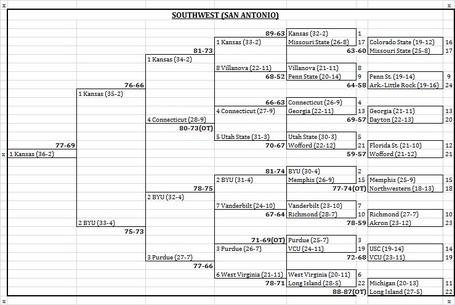 And we are set with Round 3 of K-State/KU in the Final Four! Simulation results for the East Regional will be completed some time later today.

The East Region simulation results are below. I was a bit surprised with the team that the simulation spit out as the Final Four team: Washington. But I actually made them beat UNC and Ohio State 3 out of 5 times to make certain it wasn't too flukey, and they beat UNC 3-0 and OSU 3-1. Here it is: 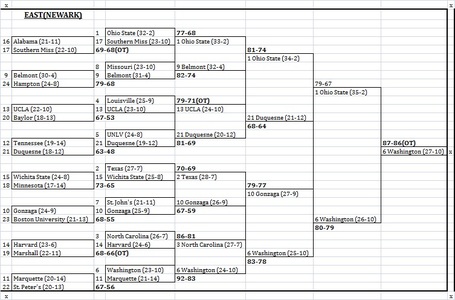 This means that the Final Four matchups are as follows:

I will be providing brief play-by-play summaries that Whatifsports spits out for each game. I will simulate each game only once (unlike the earlier rounds, where I did a best of 3 in most cases, and a best of 5 in a few, to assure that results weren't completely random).

And here is the official Final Four bracket, as it was simulated by Whatifsports.com: 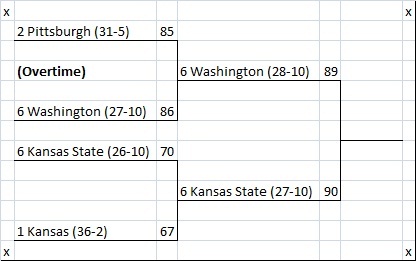