How the 68-Team Bracket SHOULD Have Looked, By the Numbers

Share All sharing options for: How the 68-Team Bracket SHOULD Have Looked, By the Numbers

This year things were supposed to be different. With four extra at-large bids, there was supposed to be very little controversy over who was given the 37th spot. And yet, on Selection Sunday, there it was. Two supposedly undeserving teams were selected, and the excrement buffeted the round air-circulation device.

I believe it was Seth Greenberg (or "Coach Bubble", as a friend of mine calls him) or Tad Boyle (whose team's disgraceful non-conference losses doomed them) who I first heard suggest that it would be best to take human judgment out of the equation when it came to selecting the at-large teams.

Whoever it was used the dreaded "BCS" term, and at first I was like, "Ah, hell no!" But as I thought more about it, it began to make more and more sense. So here's my plan to take human judgment out of the selection process.

Hit the jump to see the bracket, as well as who were the last 8 in (the last 4 in will be obvious due to the play-in game), and the last 8 out. You will probably be surprised by a few of these.

How the "selection number" is generated: Average of the three computer ratings, weighted equally.

Where humans come in: Region placement; can shift a seed up or down 1 spot to accommodate bracketing rules.

What teams have a right to complain about this bracket: No one. (edited: Wanted to make clear that anyone who wants can gripe about the bracket, but specific teams simply have no argument about getting in our not.) 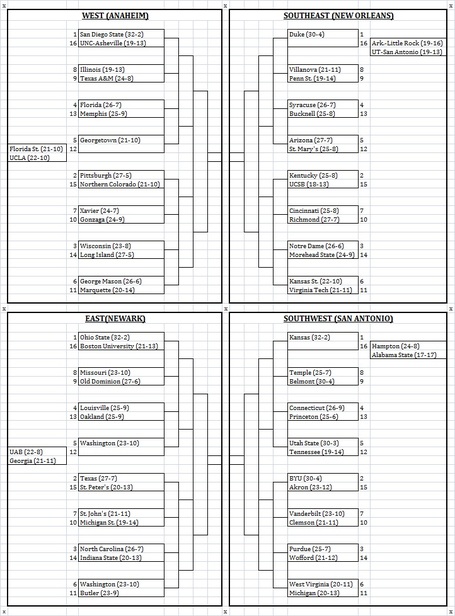 (Note: Depending upon your monitor size/screen resolution, you may need to click on it to see it larger.)

Now, a look at the last-in/first-out, along with their By-The-Numbers (BTN) rating:

Looking at this, it's clear that — their fantastic run notwithstanding — VCU did not belong in the tournament.

I have enjoyed it as much as anyone, but their actual body of work, with regards to the regular season (which is supposed to be how you get into the tournament) simply doesn't justify selecting them.

USC is clearly another team that simply didn't belong, while UAB's numbers support their inclusion in the play-in games. Virginia Tech clearly had a good case for selection, as did St. Mary's, but those of us who were decrying the committee's rejection of Colorado were just as clearly wrong.

Also, I was quite surprised by New Mexico being the first team out.

What are your thoughts on doing the tournament selection this way?

I personally think it's much more fair, and that there would be a ton less bitching and moaning from both the peanut gallery, as well as the coaches of the teams left out. How could Shaka Smart actually have complained about not getting in, with such a crappy composite rating? What do you think of the Cats' draw?