Through four games, Arthur Brown leads K-State in tackles, and it's not even close. Brown has 12 more tackles than David Garrett. He also has 4.5 TFL and 2.0 sacks on the season. There has been no shortage of praise directed at the Miami transfer for what he has brought to K-State's defense this season.

But coming into last weekend, the question of how Brown and the K-State defense would fare against a truly elite quarterback and offense remained open. Robert Griffin III possesses world-class speed, and through his first three games was better against actual FBS defenses than I am in the parking lot with no defenders other than the beer. For most of the day, K-State stayed in its usual scheme. But late in the game, with Baylor down a point and desperate to preserve its undefeated record, K-State committed a pair of eyes specifically to Griffin. 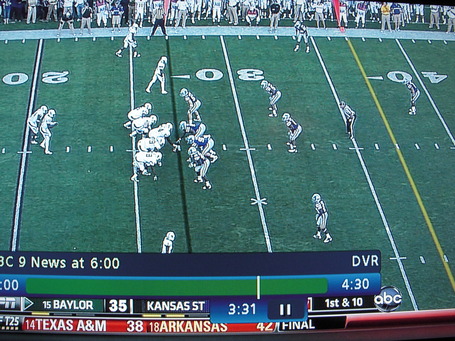 Baylor has first and 10 from its own 27 yard line. The Bears line up in a typical formation for them, 10 personnel with twin wide receivers. K-State lines up with only two down linemen, with Adam Davis and Jordan Voelker in two-point stances at the end positions. The defensive backfield is in soft coverage, with nobody less than five yards from the line of scrimmage. Arthur Brown is five yards off the line of scrimmage, directly in front of Griffin, who is six yards deep in the shotgun with Terrence Ganaway to his left. 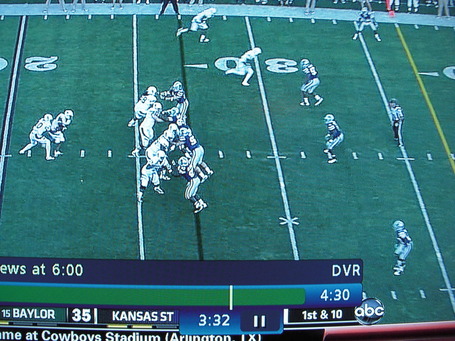 Griffin takes the snap and fakes a handoff to Ganaway. Why, I'm not sure, because with less than four minutes left in the game and Baylor down a point, nobody was expecting run on first and 10. The fake doesn't matter, anyway, because K-State's defense is playing so soft that the receivers don't have an opportunity to run by them. Notice Brown, still in the middle of the field and focused on Griffin. 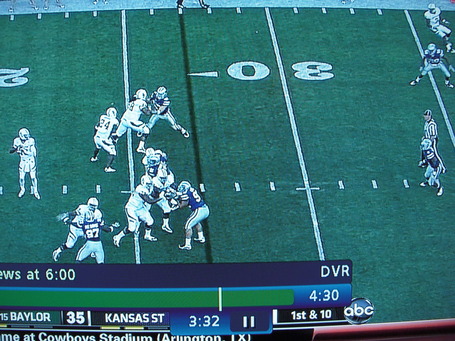 Griffin has pulled the ball back and is in passing position, looking to his right. Brown begins to drift to his left, following Griffin's eyes. Baylor's line is holding, in the sense that K-State isn't getting any pressure on Griffin...yet. 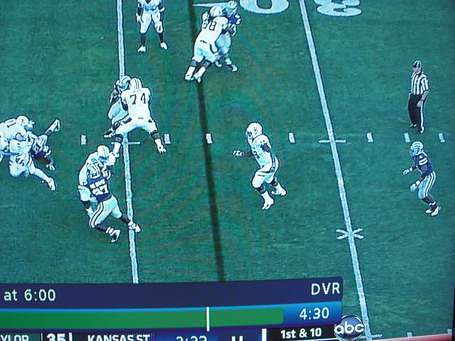 After a few seconds, Griffin can't find anyone open. About this time, Ray Kibble beats his blocker and nearly sacks the Heisman candidate. Griffin escapes and begins to roll to his left. Brown has moved a few steps to his left, but is still about five yards deep. Meanwhile, Griffin's progress has moved him toward the line of scrimmage. 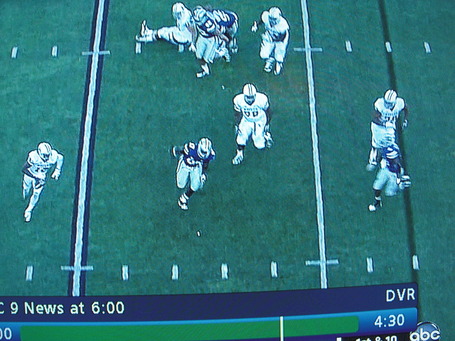 After escaping Kibble, Griffin moves away from the line of scrimmage and breaks outside the pocket to his right, but is still holding the ball as though expecting to throw it. Davis gets off his block and gives chase, but he's even with Griffin and only three yards upfield. He's not fast enough to catch him. Brown is crossing the line of scrimmage and is seven yards from Griffin and moving directly upfield. That's not a good sign, because Griffin is breaking outside. But... 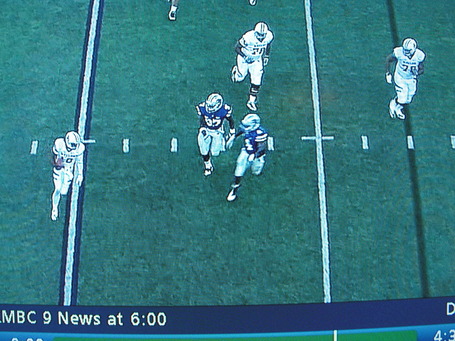 Brown recognizes that Griffin is going to scramble and turns toward the sideline. Griffin senses that the play is broken and finally tucks the ball away. At this point, though, he's given Brown too much of a head start. Against a lot of linebackers, Griffin has the luxury of time because he can outrun them. 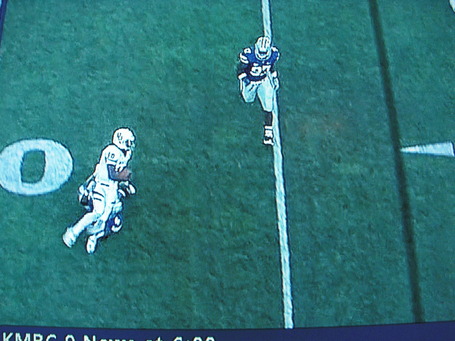 But he can't outrun Brown, who catches him just outside the numbers and four yards behind the line of scrimmage, to the thunderous delight of the Bill Snyder Family Stadium crowd.

I still stand by my comment from the other day that Robert Griffin III would beat Arthur Brown in a straight-line sprint. But there's more to football than straight-line speed. A lot of it has to do with understanding angles and then taking them. Brown is fast, but he knows he's not as fast as the RGIII Missile. So he has to make the right play. Unlike last year, however, we have linebackers who can make this play.

Missouri's James Franklin is no Robert Griffin III, but he's shown he's no slouch, either. K-State's defense, including Brown and his fellow linebackers, need to be very well prepared for tomorrow's showdown in order to get a win.