With Thomas gone and a new crop of unproven running backs, K-State entered last Saturday's game against Baylor not having run a single play in the Wildcat formation this season. Before he had a breakout first three games and decided to declare for the NFL Draft early, Wildcat fans salivated over the possibility of Bryce Brown lining up in the shotgun. Instead, it was resident soul-searcher Angelo Pease who is, you guessed it, a junior college quarterback. 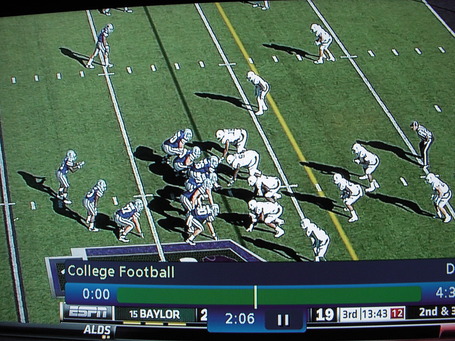 While this wasn't the first play K-State ran out of the Wildcat formation against Baylor, it was the most successful. It was early in the third quarter, with K-State in the Baylor red zone and facing second and short, a standard down. The Cats have Travis Tannehill lined up at tight end to Pease's right. John Hubert and Braden Wilson join Pease in the backfield, both aligned to the strong side. The play is screaming "run right!" Collin Klein and Brodrick Smith are split wide, and I do mean wide, to the weak side. Their job is basically to keep two defenders far away from the play.

For its part, Baylor is in its standard 4-3 alignment. One linebacker is wide to the weak side, while the other two are lined up tight to the strong side, opposite Tannehill, an obvious reaction to K-State's unbalanced alignment. Cornerback Chance Casey is almost on the line of scrimmage outside the defensive end. 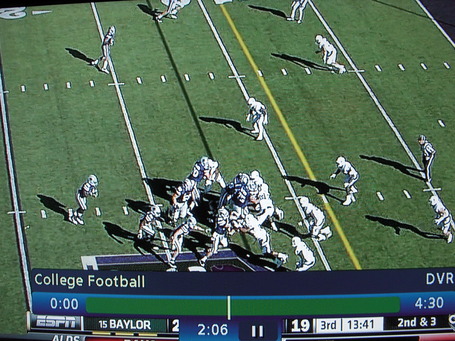 At the snap, the weak side guard pulls, adding another blocker to the strong side mix. Tannehill locks up the defensive end, who tries to get up field, a move Tannehill is all too happy to let him make. K-State's center and strong side guard lock up Baylor's interior linemen. Baylor's OLB moves toward the line of scrimmage reading the run. The middle linebacker also reads run, but he's too far into the middle of the field to make a difference. 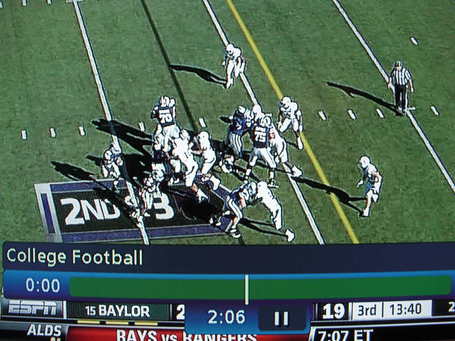 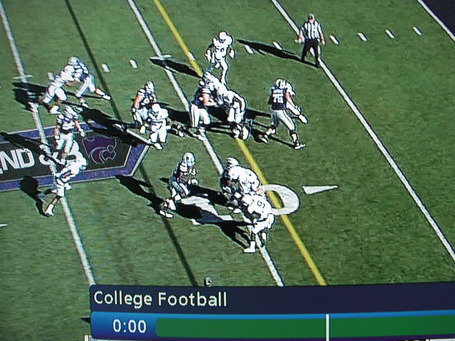 Hubert finds his man and, while he will ultimately be thrown to the ground by the bigger safety, he does his job, Pease reads the block, and springs through the opening to paydirt.

Go back to that first slide, before the snap. The idea of the Wildcat is to gain an extra blocker by making the player who takes the snap the ballcarrier, rather than a player who stands around and throws a pass or hands the ball off to a running back. In this alignment, K-State gains a greater advantage by sending two receivers far away from the play. By doing so, K-State essentially has eight blockers on eight defenders, knowing that the weak side linebacker is too far away to make the play, too. If the blockers execute their assignments properly, the play is guaranteed to gain yards.

It may be a while before K-State passes out of this formation. But at some point, the opposing defense will cheat away from the receivers even more than Baylor does here, at which point Bill Snyder may have the offense check into a passing play. Either that, or Tannehill will fake a run block and release into the secondary while Pease fakes a quarterback draw. The variations are endless.