By my count, John Hubert lost yards on six of his 26 carries against Missouri. Technically, it was seven, but I didn't count the yards lost when he fumbled Collin Klein's pitch on an option play.

In any event, several times during the game, Hubert's primary running lane was jammed and he tried to bounce the play outside. But Missouri's defense has some speed, and that was generally an unsuccessful course of action. Granted, you can't put all of the blame on Hubert, because the offensive line needs to do its job, too, but there were plenty of times when Hubert could have minimized the damage by putting his shoulder down and making the most out of a bad play.

On one particular play in the early fourth quarter, Hubert showed what he can do when he gets upfield, even when he runs into tacklers. 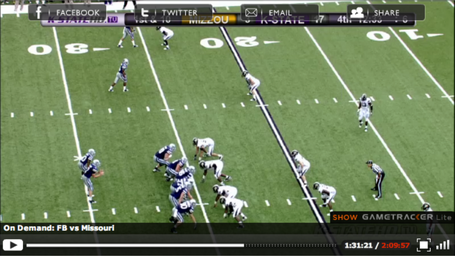 K-State is in 11 personnel, with Travis Tannehill to Klein's right and Hubert to Klein's left. Two wide receivers flank to the weak side, while another (not visible in this shot) lines up on the strong side. For its part, Missouri appears to be in a 4-3, although I can't tell for certain if the defender lined up over K-State's slot receiver is a linebacker or a fifth defensive back. Notice that Missouri's two safeties are fairly tight to the line of scrimmage. Both are only 10 yards from the line, and neither are in position to be much help on K-State's wide receivers unless they run inside routes. With less than 13 minutes remaining, and trailing 17-3, Missouri is clearly expecting run. 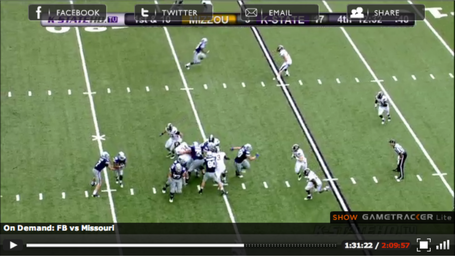 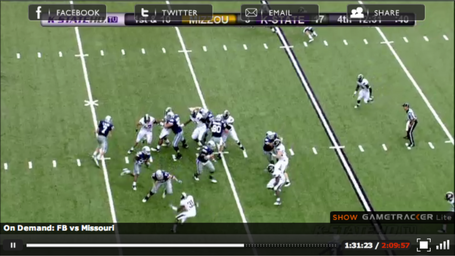 Missouri's cornerback on K-State's strong side wide receiver has read the play and moved in to stop it, requiring the pulling guard to take him on. The center and weak side guard have moved through traffic and got to the second level, where they will take on Missouri's middle and strong side linebackers. Hubert sees the crease and moves upfield. 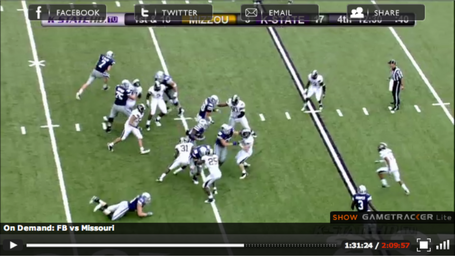 Missouri's cornerback, E.J. Gaines, gets past his blocker and goes for Hubert's feet, but he's too late. Mizzou's safeties converge, but probably expect nothing more than moving toward the pile when Hubert is tackled by either of the two defenders in front of him. There's a lot of traffic at this point. 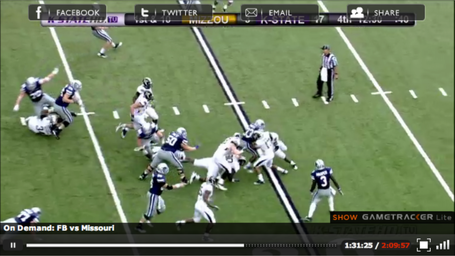 The safeties converge and Kenji Jackson hits Hubert high, and the free safety goes low. Despite being small for a Big 12 running back, Hubert has a head of steam and runs hard into the contact... 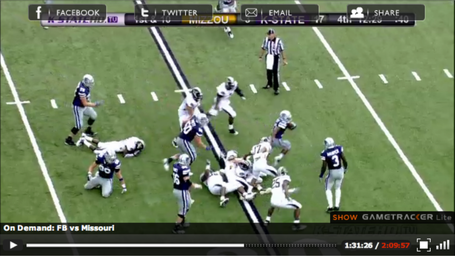 ...and ultimately through the contact. Poor tackling by the Missouri secondary and strong, decisive running by Hubert leads to Hubert breaking into the clear. 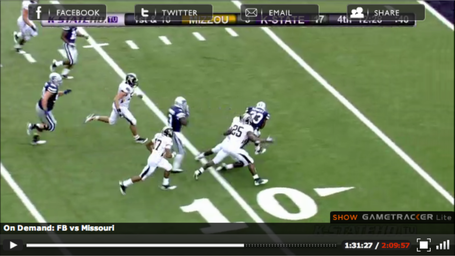 In fact, if not for good hustle from the backside by Jacquies Smith and Zaviar Gooden's pursuit, Hubert probably would have scored, As it was, he was dragged down after a 21-yard carry to the Missouri four yard line.

Unlike some of the plays where Hubert lost yardage, this play was well blocked at the line of scrimmage. But Hubert showed that you can't simply run up and grab him to pull him down. Kenji Jackson was in perfect position to take Hubert down, but found out that even when the runner is 5'7", 185 pounds, hitting him in the shoulders doesn't work. Hubert is never going to be a prototypical between-the-tackles back, but he could minimize his bad carries by trusting himself to take on contact. Against Texas Tech's weak rushing defense, Hubert can't bail out the defense by running east and west.