BOTC Fantasy Basketball Update: Panjandrum Maintains a VERY Slim Lead Over TB; KSB and BC Fight to Stay Out of the Cellar

Share All sharing options for: BOTC Fantasy Basketball Update: Panjandrum Maintains a VERY Slim Lead Over TB; KSB and BC Fight to Stay Out of the Cellar

Panjandrum is still in the lead, as his fantasy squad currently leads in Points, Offensive Rebounds, and Assists. The race has tightened significantly, though, as he leads by only a point in total points, and is 0.12 ahead of TB in the raw average. The first table lays out the BCS-style scoring. Any half-points indicate a tie in positioning for that category. The second table indicates the raw data behind the category scores. I am considering allowing one mid-season "substitution", whereby you can put the sixth-man you chose in for one of your starters. All of that player's stats would then replace all of the player's stats whom you subbed out. What does everyone think of this idea? If we choose to do it, then I will send out the spreadsheet to the other three managers, on which I tabulate the total statistics. 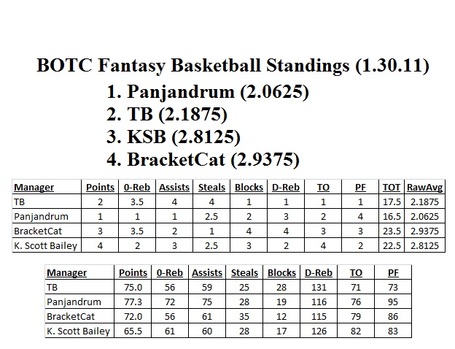