Share All sharing options for: Adventures of the Big 12: Twelve Angry Men 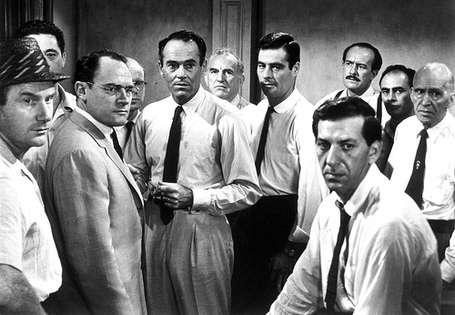 Behind closed doors at the Big 12's annual meetings, the boys got together to hash out the topics of the day. You know...important things like where we're going to hold the Women's Basketball tournament for the next three years.

Just kidding.  Only Baylor cares about that.

Anyway, everyone knows that's not what was on everyone's mind. And, thankfully, through the power of 'multiple sources', we have a strong report of what happened when the gang got together in Kansas City this week.

Enjoy. It may be the last time this current group gets together for their usual shenanigans.

Texas: I call this meeting to order. Today's agenda topic: Who stays and who goes. I'm looking for a quick vote. Obviously, I like bossing all of you around, so I'm in. Oklahoma?

Oklahoma: Hell, I'll stay. Do you really think I want to join the SEC or Pac-10? I still go into shell shock when a woman asks me if I have a Trojan on me, or if I walk past a store in the mall that sells 'Crocs'.

Oklahoma State: In, yo. I'm afraid if I take this game to LA, I may get shot.

Colorado: Staying. Unless the Pac-10 offers, and then I'll leave so fast there will be burn marks in the carpet. But they don't want me without you guys, so I'm probably still stuck with you assholes.

Missouri: Anyone know where the nearest U-Haul place is?

Texas: Jesus, can you be more obvious?

Missouri: What? Do you think I like being irrelevant? Do you think I like hoarding championships in fucking Softball? And it's not even the cool softball where you drink and wear inappropriate t-shirts that say things like "Balls Going Deep". It's the lesbian kind of softball where half of the cars in the parking lot are pink Cadillacs, and the chicks that show up wear visors and Birkenstocks.

Kansas State: I'm not really into PC, but there's a lot wrong with what you just said...

Missouri: You know what? I don't care. I'm going to go the Big Ten, wipe my ass with piles of TV money, and spend my winters buried in lake effects snow.

Texas: Wiping your ass with money is awesome.

Missouri: So, yeah, I'm out. Fuck you, fuck you, (points at Kansas) and double fuck you.

Texas: Alright, order...ORDER! Kansas State, what are you doing?

Kansas State: Are you kidding me? Do you think I want to join the Mountain West? In. A thousand times in.

Kansas: (Whispers to his attorney...) My lawyer says that it would be in my best interest to stay.

Kansas: At this point, I have the FBI and IRS so far up my ass that they've set up a branch office in my colon. So, I'm taking him wherever I go.

Texas: What an embarrassment. Tech?

Texas Tech: In. I go where you go my liege.

Baylor: God spoke with me last night, and he said that I should form a conference with other like religious institutions supported by the Almighty himself. However, he said I had to fire Scott Drew because he's an Eddie Haskell-style prick of the highest order, and I said, "No." I like being good at basketball now. Also, those Oral Roberts kids creep me out. They're like a cult.

Iowa State: I will do anything to stay in this conference. Anything. I am not above handing out sexual favors, and I don't care who asks for it.

Texas: So if I ask you to have sex with a dirty hobo, you'll do it?

Iowa State: Absolutely. You can even tape it if you'd like. That would be a hundred times better than joining the MAC.

Texas: Alright, we'll put that on the agenda for tonight after dinner and drinks at Tomfooleries. Nebraska, what say you?

Nebraska: I am 100% committed to exploring all of my options.

Nebraska: I am fully invested in this conference unless something better comes along.

Oklahoma: How does sitting on that fence feel?

Nebraska: It kind of chafes.

Texas A&M: I want to join the sex conference.

(Texas puts his face in his palms...)

Texas: Do you mean the SEC conference?

Texas A&M: Yeah, I want to join the sex conference.

Oklahoma: I think we should let him go.

Texas: We can't. The state legislature says he can't go anywhere without me.

(Texas A&M puts his mouth over the microphone in front of him on the table and tries to swallow it...)

Texas: Alright, so we've got ten stays, one go, and one guy who can't seem to figure out what he wants to do. Nebraska, what can we do to get you off of the fence?

Nebraska: Nothing really. Joining the Big Ten is appealing. I mean, it's like a time warp. Neither of us have really been relevant since the late 90's, so it will be kind of comforting to be amongst like-minded people. Michigan called me and invited me over for a 90210 and Melrose Place marathon.

Nebraska: Look, I want to be with other people who think time stopped after the late 90's. Do you know how much being me sucks right now? I haven't won a conference championship in ELEVEN years. Hell, even Kansas State over there has won a conference title since I have.

Kansas State: Kicked your ass too.

Nebraska: Fuck off. And my basketball program is an embarrassment. In the Big Ten, Sadler ball will be considered 'up tempo', and my waning baseball program will be one of the southern most schools, so I'll have a leg up there.

Texas: Everything you just said there makes me sad.

Nebraska: You're sad? The only reason I'm not sad is because my entire state has been on Prozac since Tom Osborne retired. Do you really think we like Pelini? The guy wears sweatshirts on the sideline. SWEATSHIRTS. The guys in the navy blue polo shirts at Wal-Mart that greet me when I walk in look and act more professional than he does.

Oklahoma: Have you considered therapy?

Texas: Dan, go back to your computer, keep playing Minesweeper, and we'll call you when we're done.

Texas Tech: That was kind of harsh, don't you think?

Texas: He should be thankful he still has a job. We used a cardboard cutout of him a few weeks ago at a function with a tape player attached to its back looping random, non-committal statements, and no one knew it wasn't him until Baylor tried to hand him a plate of barbecued chicken and it dropped to the floor.

Texas A&M: I ate that chicken.

Oklahoma: Of course you did.

Iowa State: You guys will take him with you and not me?

Texas: He brings more televisions than you do.

Texas: He's not retarded; he's just misunderstood. He hasn't always been this way.

Iowa State: He's pissing himself again. Am I misunderstanding that?

(Texas A&M smiles as the warm urine runs down his leg...)

Texas: (Looks at A&M...) Look, I can't defend you forever. At some point, you're going to need to snap out of this.

Texas Tech: I've always wondered what goes on inside his head.

(Dan Beebe lets out a shriek at his computer...)

Texas: Dan, don't worry. We all hit the mine from time to time.

Beebe: They don't want you.

Beebe: They don't want you either.

Texas Tech: Who do they want?

Oklahoma: I'm going to get sick...yep, here it comes.

Texas: Calm down, guys. We all want to stick around, right? Well, let's not jump the gun here. If we're all in this together, we'll stay. Nebraska, you in?

Nebraska: I'm firmly set on exploring all of my options.

Texas: Do either of you even have an offer from the Big Ten?

Missouri: It's just a technicality. I'll get one. Eventually.

Oklahoma: You sure you want to take that bet?

Missouri: I'd rather shoot for the moon than hang out with you assholes.

Texas: Not if we don't have to.

Colorado: Jesus Christ. I finally, through sheer dumb luck, get a shot at getting what I want, and you assholes start cock-blocking me. Screw all of you, I'm out of here.

Beebe: Wait, the Pac-10 said that they may take Baylor instead of you.

Colorado: SON OF A BITCH!!!

Texas: Alright, Colorado's back in. Nebraska, Missouri...it's on you now. You have until Friday to figure this out.

Nebraska: I will stay if you can promise me that the Big 12 Championship will be played in Kansas City at least every other year.

Texas: Let's not get unreasonable now.

Nebraska: Unreasonable? UNREASONABLE??? You take all of the money, get all of the good TV spots, and now you're getting the title game in the Jerrydome every year. And I'm being unreasonable?

Kansas State: You did kind of vote for the unequal revenue sharing when you were, you know, good at football. Ten years ago.

Oklahoma: Actually, it's been eleven years since they won the Big 12.

Kansas State: I stand corrected. You were good at football eleven years ago.

Nebraska: And you assholes wonder why I want to leave.

Texas: Calm down everyone. Tempers are starting to get in the way of reason. Let's just handle this calmly. Nebraska and Missouri, you have until next Friday to decide if you want to stay with us. If you don't, half of us will go to the Pac-10.

Colorado: It's like a nightmare, but I'm still awake...

Kansas: I literally did not see this coming.

Kansas State: So where do the rest of us go?

Texas: Well, I can put in a good word for you with the Mountain West or Big East.

Iowa State: What about me?

Texas: Have you ever considered trade school?

Kansas: You mean to tell me that my storied basketball program is going to slum in the Mountain West?

Oklahoma: Sorry, dude, but this is about football. And, to be honest, no one is going to party with a dude that's under Federal investigation.

Kansas State: What the?

Texas: Kansas, you really are an asshole. Everyone said you were, but I always gave you the benefit of the doubt. But, yeah, you really do suck.

Beebe: If anyone needs me, I'm going to head to the shitter.

Texas A&M: Me too. I'm going to the shitter for some head.

(Everyone stares blankly at A&M...)

Texas: I think we're done here. Everyone, we've got a week to figure this out. Go to your corners, make your calls, and we'll hash this out later. Nebraska and Missouri, the ball is in your court.