Documenting K-State's Problems Against the Run

Share All sharing options for: Documenting K-State's Problems Against the Run

It's no secret that K-State is pretty bad against the run.  OK, that's an understatement, as K-State is the worst FBS team at stopping the run, yielding 228.5 yards per game.

K-State's problems against the run are multi-factorial.  For one, the Cats aren't especially big across the defensive line.  The starters against Oklahoma State were Brandon Harold (258 lbs.), Prizell Brown (284 lbs.), Ray Kibble (295 lbs.) and Antonio Felder (243 lbs.).  As you'll see in the play we analyze, OSU's offensive line didn't have much trouble locking up the defensive line and getting a push at the point of attack.

So a lack of size on the DL is one problem.  But the positioning of the linebackers and the run support of the safeties also comes in for scrutiny here.  Hit the jump and we'll take a look at a simple counter play that went for a 29-yard gain for Kendall Hunter in the first half.

Now, granted, Kendall Hunter may be the best running back in the country, so he's going to have some big plays.  And just given the push that OSU got on the play below, he likely would have gained a few yards no matter what.  But in a purported bend-but-break scheme such as K-State's, the difference between success and failure is being in position and limiting Hunter to five yards on plays where the line gets a good push, rather than missing assignments and giving up the big chunks of yardage. 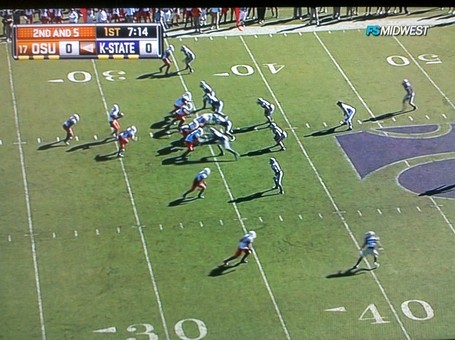 As you can see, OSU is lined up in what is essentially an offset I-formation, but with Brandon Weeden in the pistol formation.  K-State is in a 4-2-5 alignment on second and five from the Pokes' own 35 yard line, with Kadero Terrell in a two-point stance.  Prizell Brown is the DL to the short side of the field, Ray Kibble is the nose tackle, and Brandon Harold is the DL to the long side of the field. Jarrell Childs (short side) and Alex Hrebec (long side) are the linebackers.  Stephen Harrison is in press coverage along the far sideline, while David Garrett is matched up with the slot receiver and Terrence Sweeney is off the line on OSU's wide receiver to the near side.  Tysyn Hartman is the safety to the short side of the field, while Ty Zimmerman patrols the long side. 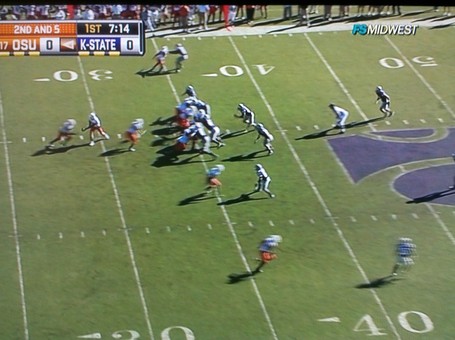 Weeden takes the snap and turns to his right to hand off to Hunter.  OSU's other running back crosses over and will look for Kadero Terrell on the kick-out block (he will deliver a nice hit that helps open up the lane for Hunter).  OSU's RT and RG double Harold before the guard locks up Hrebec at the second level.  The OSU center has no problem with turning to his right and sealing Kibble, while the LG moves past Kibble and zeroes in on Childs at the second level.  Prizell Brown is also turned toward the middle of the field by the OSU LT.  In the defensive backfield, Hartman correctly reads that it is a running play and begins floating toward the line of scrimmage. 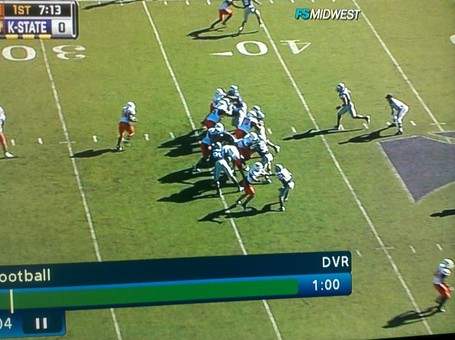 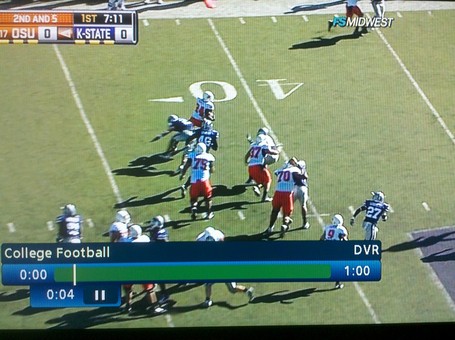 ...and he's right.  Hartman recognizes the cut a step too late and barely gets a hand on Hunter.  The all-conference running back rumbles down the field for a 29-yard gain before Ty Zimmerman, hustling from the back side, makes the tackle.  In fact, if Hunter would have read the block of his wide receiver matched up on Stephen Harrison correctly, he probably would have scored.

If you look in the last screen cap at where Hartman and Hunter are, you'll notice that they're a mere three yards beyond the line of scrimmage.  Had Hartman moved outside initially, he would have either turned Hunter back to the congestion in the middle of the field, opening up the possibility that someone gets off a block and makes the tackle, or he would have made the tackle himself.  Both probably would have stopped Hunter short of a first down, leaving the Cowboys in third and short.  While I'll grant that third and short isn't the ultimate goal of a defense, for a bend-but-don't-break defense such as K-State's, it's one of the steps along the way.  In any event, it's much better than a 29-yard gain that put the Cowboys at the K-State 36.

Doing this post had me thinking back to when I was a kid, or when I was in high school, or when I was in law school (until the last year), and I would watch sporting events and often think "man, I wish they'd show a replay of that."  I'm sure a lot of you have said the same thing many times.  Now, thanks to DVR, I can control whether I get a replay, and I can go back to a recording five days later and analyze a play that could have been stopped for three yards, but turned into almost a 30-yard gain.  It's been said a million times, but I really can't figure out how I lived without DVR.

This post is the second in a series of posts sponsored by Samsung.  Special thanks to K. Scott Bailey for his input into the Xs and Os of the play.