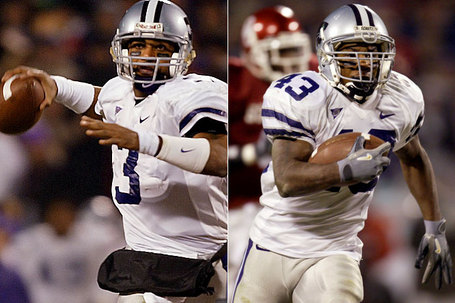 As promised, I'm coming back to my earlier proposal for a 10-team FBS playoff, to see how it might have played out in earlier years. For a detailed explanation of how the system works, please refer back to my original article, in which I outlined the plan. The first season I'll look at after the jump is 2003 or, as I like to call it, "The Year of Big Game Bob Losing His Mojo."

The 2003 college football season was most notable for producing a split championship -- which the BCS had seemed to promise would never happen again. USC (AP) and LSU (Coaches' Poll--BCS) shared the national championship after the bowl season had concluded. Oklahoma had held the top spot in both the AP and the Coaches' Poll for the entire year. Even after being throttled by K-State in the Big 12 Championship Game, the Sooners remained #1 in the BCS rankings, based solely upon their strength in the computer portion of the rankings, as both "human" polls dropped them to #3. In the final BCS rankings, LSU passed USC for the #2 spot in the BCS rankings by the slimmest of margins, despite USC being #1 in both human polls.

This set the stage for the controversial split national championship. LSU defeated Oklahoma 21-14 for the BCS National Title (which the Coaches' Poll was contractually obligated to award to the winner of the BCS title game), and USC defeated 4th-ranked Michigan 28-14 for the AP National Title (as the writers were under no such contractual obligation). Calls for a playoff grew louder after this result, but have -- as of yet, anyway -- gone unheeded by the NCAA.

2003, With the Hypothetical Bailey Playoff System

For those who couldn't be bothered to click the link to my previous article above, the system is relatively simple. It involves 10 teams, with 6 automatic qualifiers from the "BCS Conferences", and 1 automatic qualifier from the Non-BCS/Independent teams. In other words, every year there would be at least one non-BCS team involved in the playoffs, even if they had one loss (as was the case in 2003). In addition to the seven automatic bids, three "Wild Card" bids would be given as well. These would go to the highest-ranked (according to the BCS formula) teams left in the pool of potential qualifiers. Now, let's take a look at how 2003 would have shaped up. Teams who played in a BCS conference championship game (which, because of how Week 1 would be scheduled, would not allow them to play in either Week 1 game) are noted with a plus sign.

* = one win was taken off of KSU's record, because according to the scheduling rules that would be in place, they would not have been allowed to play the extra 13th game before the Big 12 Championship Game, if this plan had been in place.

When seeding these teams 1 through 10, I kept a couple of factors in mind. First, no team could play another team from their own conference in their opening game. That meant that Texas joined OU and Kansas State as automatic Week 2 teams, since any iteration placing Texas into a Week 1 game would have forced OU to drop from their #1 seed down to a #3 seed to avoid playing Texas in their first game.

I put these match-ups through the highly-accurate Bailey Simulation Model, and these were the results. (In other words, I made crap up for each match-up.)

Week 4 (Friday, January 9, 2004)
5 KSU (13-3) shocks 3 USC (13-2) 32-31 in a back-and-forth affair that sees KSU lead 17-14 at the half, before falling behind 31-24 as the fourth quarter is winding down. Roberson leads the Cats on one last drive, and sneaks over from the 1-yard line with only ten seconds to play in the game. Coach Snyder decides to roll the bones, and goes for two and the win. Roberson pitches to Sproles on the sprint option, and the little man dives in past the corner pylon, giving KSU a 32-31 victory.

All of my homeristic (Why is that not a word? I hate these red squigglies!) tendencies aside, how exciting would this type of playoff format have been? Even if chalk had held, and OU had played USC in the national championship game, with USC winning (they were the best team in the land that year) getting to that point would have been an incredible amount of fun! Also, the teams that lost in weeks 1 and 2 could have accepted bids to a traditional bowl game, keeping the bowl fat cats as happy as possible. I haven't had time to take such an in-depth look at other controversial years, but I can't imagine that they would have played out all that much differently, as far as the excitement of great playoff match-ups goes. My next goal for this project will most likely be the infamous 1998 season. Hopefully, my very homeristic take on that year will be cathartic, at least to me.

Let me know what you think of this first prior season analysis in the comments below.