Why The Big Game Matters So Much: A Personal Story

Share All sharing options for: Why The Big Game Matters So Much: A Personal Story 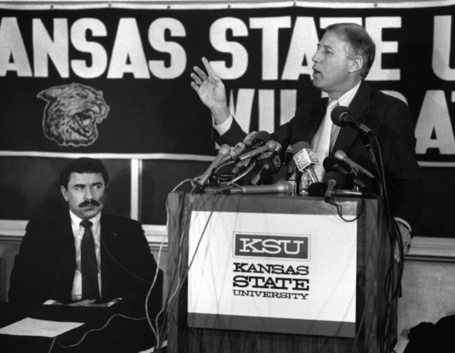 No one has ever done, what this man was preparing to do, at the moment this photo was taken.
The week of the Big Game -- be it in football or basketball -- always brings with it thoughts of my dad. Some of my best memories of him are wrapped up in K-State games. I remember Jack Hartman (whom my dad idolized), and Lon Kruger (whose Silver Lake team was beaten my dad's Lewis Spartans in the quarterfinals of the 1970 Kansas state basketball tournament). I remember the 1982 football season, and how it was a flicker of light down a long, dark hallway leading to 1990. Without Coach Jim Dickey, and his boy Darrell, my early Wildcat football memories would have contained naught but losing, from my first memories of listening to Cats' games, in my dad's farm truck, as a kindergartener back in 1979, all the way until Coach Snyder arrived on the scene in late 1988.
In fact, as a know-it-all 14-year-old, I was singularly unimpressed with the "old man" (that's honestly what I called him, even back in 1988, when he was all of 49) who stepped to the podium that day. It was my dad who told me, "Give him some time, Kev. I think he might be different." As in most things, my dad was right.
Keep walking  memory lane with me after the jump...
One of the things I most remember, is listening to the radio call of KSU football games with my dad, back before everyone was in love with K-State football. In our small southwestern Kansas town, lots of people liked KSU basketball back in the 80s, but few would admit to being fans of the football team. Yet, every Saturday, my dad and I would haul the transistor with us out to the farm where he worked. We'd get that extension cord out, and turn the volume up high. As I handed him wrenches and such, we'd cheer as our quarterbacks, like Stan Weber (yes, before he was the Wildcats' color analyst, he was our quarterback, back in 1983-84, I believe) Carl Straw and Paul Watson, led the team to actually break through for a score against Nebraska or Oklahoma. But, it was on the day of the Big Game when we were truly the most wrapped-up in KSU football. You must understand, back in the mid-to-late-80s, the Cats and Hawks were so such inept football teams that the Sunflower Showdown (I do SO hate that name) became colloquially known as the "Toilet Bowl" (at least in our area). But that didn't matter to us. We were so used to having a bad won-loss record, that we hung all our Purple football pride on how the Cats did against the Hawks.
Those games were everything to us. Often, as an important drive played itself out, we would find ourselves sitting on the floor of his work shed, the transistor between us, engrossed in the action. For me, the most gut-wrenching game was not one of our 5 losses to the Hawks during the 80s, but the tie in 1987. At that point, we had lost 13 straight games (our last win coming in Lawrence, the year before), and I was very much pinning my hopes for the entire season on that one game. As I remember it, there were only maybe 30 seconds left in the game when Stan Parrish sent the kicker on to tie it. We were trailing 17-14, and had driven down to (again, according to my faulty memory -- I was 13) around the 1- or 2-yard line. I think if I had been the AD at the time, I'd have chased Parrish out of Manhattan that day myself. But, the actual AD (whose name I don't recall) gave him one more miserable year, in which our Cats finished an ignominious 0-11, finally being tabbed (and, rightfully so), "Futility U" by Sports Illustrated.
I remember watching the Regional Final in 1988 against Danny and the Miracles. Some people forget that Kruger's Cats had beaten them twice earlier in the year, and that we were favored to win that game. I cried that night as I tried to sleep, thinking how close we'd come. I remember that we never did like it when the Cats left Ahearn, though. The Old Barn had ATMOSPHERE -- a real advantage. Bramlage had... well, nothing. We always hoped that someday they'd move back to the Old Barn, but we knew they wouldn't. Someone named "Bramlage" had given a lot of money to the school, so that's where the Cats play now. I'm still trying my hardest to love it, but -- aside from all the football games with my little brother and our buddy Michael Ketterl -- my best sports memories from college are still in Ahearn: cheering for the volleyball team I filmed and kept stats for. Man, the Old Barn could still rock!

Most of my memories are good ones, though. After my high school football team finished second in state, it was some consolation to see my Wildcats rip off 3 straight wins to finish 7-4 and barely miss out on a bowl game. Two years later, when I was in my first year at KSU, the Copper Bowl win came. We couldn't believe what we were seeing. And then it just kept going in the seasons after that! People who didn't cheer for the Cats before 1990 don't understand how strange it was to see our Cats winning so often. My younger brother Michael joined me on-campus for the 1994 season, and we did have some good times! We were at every Cat home game that year, but the Big Game was in Lawrence, so we had a party at our buddy Michael Ketterl's apartment, which was right down the street from the Stadium. After we beat the Hawks on national television, a call was placed -- as always, win or lose -- to my dad.

One of the games I will always remember is the first one after his untimely death, of cancer, at only age 44. By the time this game came around, my little brother had moved to Tulsa to become a minister, and our friend Michael Ketterl had also died of cancer,at 22, only a few days after Dad passed away in April. I don't know why I felt such a need to go (it was the only home game I traveled back from KC, where I was student-teaching, for that fall), but on November 8, 1997, I was in the stands as Michael Bishop and the boys in Purple rolled the Hawks again, 48-12. For a wonderful three hours, nothing mattered except the team, the noise, and the joy found in that win. But, it was the first time I wasn't able to call my dad right after the game, and the road back to Kansas City that night held many tears.

I close this story with this: I love my Cats. I desperately want us to win, and it pains me when we don't. But, even when we don't, my sporting blood still runs purple. I'm still a Wildcat. I'll always will be a Wildcat. It's wrapped in all the joys and disappointments that I've found in sports throughout my 36 years of living. It's wrapped in some of my best memories of my dad. And it's in the very nature of what I feel makes me me. Some (maybe most) will think it odd how much I care. But, if caring this much about my college makes me strange, I guess I'll just have to be strange, because it's who I am. It's the week of the Big Game, and I've only one thing left to write: