Share All sharing options for: Adventures of the Big 12: Iowa State (Part 1) 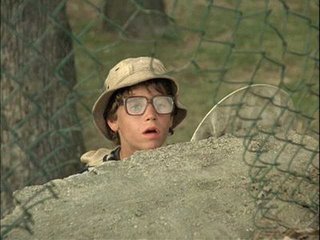 Some of you who enjoy the Adventures series probably wonder where in the hell I come up with a lot of these characters and their personalities.  Sure, I like to take what I perceive to be the university's "real life" personality, but I also have a back story in my head for each and every one of them that works its way onto the page.

Anyway, as some of you have probably already guessed by reading other Adventures posts, I'm a big fan of Lost, so the usage of flashbacks is attractive to me in telling a story.  So I figured that since Big 12 play has started, I'd try to share bits and pieces of that back story with you when appropriate.

Considering that this is 'Farmageddon' week, I figure it's only fitting to start off with Iowa State.

Click the jump to find out all about your favorite invisible man.

It all started the day he was born. His mother, Cynthia, was a lonely woman on the outskirts of Des Moines, and his father was a trucker that wanted to "butter her bread" the moment he met her at that truck stop off of I-35. She saw a twinkle in his eyes when she poured him his second cup of Maxwell House, and he liked the way she shimmied playfully as she headed back to the counter to grab him a piece of lemon meringue pie. They consummated their brief love affair at a pay-by-the-hour motel just a mile down the road, and their fifteen minutes of passion left him with a smile on his face and a bun in her oven.

Shortly after he was born, his mother took a job working for her Uncle Rusty at his hardware store in Ames. She worked the check out counter...and checked out every worker that came through the store. At one point in the mid-60's, it was a running joke whether or not she'd been hammered more than the nails purchased at Rusty's True Value. All the while, Iowa State, a small boy at this point, spent most of his time, alone, in his grandparent's home, sitting on a plastic covered couch watching "stories" with his grandmother while the other children played outside.

Oh, how he longed to play with them. A few times, when his grandmother would let him go outside while she smoked her Salems, he would approach the other neighborhood boys in the street and ask them if he could play. They looked at him, with his Coke bottle glasses and slight frame, and laughed. He'd run back inside, dejected, to watch another episode of Guiding Light while his grandmother chatted on the phone with her friend down the street.

His mother, who spent all of her days selling screws, spent all of her nights getting screwed. And shortly after his fifth birthday, she left for good with a Foghat roadie. They played a show in Des Moines one night, and the next day, she left, never to be heard from again.

At school, as you can imagine, Iowa State was always the last picked for everything. Basketball, football, baseball...you name it, and he was the last one picked at it. The only exception was dodgeball, and that was mostly because a lot of the kids just wanted to watch him get hit in the head with large rubber balls.

When he got to middle school, he became friends with kids in the math club, chess club, and any other club populated with other anti-social misanthropes. He wasn't good at any of these activities, but they all yearned for social companionship, and none more so than Iowa State. So he did the best he could to fit in.

When he was sixteen, he had a crush on a pretty young girl in his U.S. History class. She was a cheerleader, tall and blond, and he was still the slight, nerdy kid that he had always been, but now he was taller and had a face like a pepperoni pizza . Every single night, he would read the next day's chapter, twice, and he would answer every question he could in hopes that she would need help and ask to be tutored. And then, around mid-terms, he had his chance. After answering a question he read about the night before, he impressed the academically challenged (but physically endowed) cheerleader, and she asked him for his help with the next assignment. They met in the library after school, and he helped her with all of her homework. This went on for a few weeks, and near the end of the third week, he summoned up enough courage to ask her on a date. She smiled, gently laid her hand on his shoulder and said, "Hell no. I have a reputation to keep. And you smell like bologna and Clearasil."

Crushed, Iowa State sunk back into his shell and shut himself off from the world. He vowed, one day, to make his mark on the world, and he'd show that cheerleader what he was made of...

But that day would have to come later. After the cheerleader told her boyfriend, the star quarterback, about Iowa State's romantic interests, he was stuffed in a locker. And the janitor wasn't going to be much help because he still blamed Iowa State's mother for giving him the clap back in '73, and he hated that little hooker's bastard child.