Share All sharing options for: The KU Gang War

Well, the big news of the day is that basketball and football players from the University of Kansas apparently have spent the better part of the last 36 hours trying to maim and kill each other. Multiple fights have broken out on campus, including a large fracas this morning right in front of their student union as students were going to class.

You gotta love it. On the verge of their best seasons ever in each sport, the Jayhawks appear hellbent on self destruction instead. Even better - rumors say the whole thing started over a woman. I guess the good news is, it didn't start over a dude.

Click the jump for the latest links and some choice snippets. We'll have more analysis as TB and Panjandrum get some free time to catch up on everything, of course.

Foolish fisticuffs a punch to the gut for Jayhawks (Gary Parrish, CBSSports.com)

My favorite part is where Tyshawn Taylor uses racial slurs on his Facebook status updates, and players allegedly used racial slurs against each other while fighting this morning.

But Jason King assured us that mean ol' Tim Fitzgerald was lying about KU players using racial slurs against Denis Clemente earlier this year! Who am I to believe?!

Seriously, if KU players have no problem calling their fellow students racial names, it's pretty easy to believe they would use them against K-State players, isn't it?

This story has made it too far out there to be covered up entirely, as Lewcifer Perkins is wont to do at times like this. I'm sure there will be minimal suspensions for either side, what with football season under way and basketball season soon to begin.

But eventually donors are going to get tired of this shit. I'll dig up links later, but I believe there was a fight between the two teams last year, too. And there was the incident this summer that put a KU offensive lineman in the hospital with a head injury, which was neatly swept under the rug by Sweet Lew.

At some point, major donors are going to tire of these black eyes. Of even greater concern to the university administration, though, should be the parents of other students who have cause for serious concern.

For those who say it was "just a fight," consider this: What if one of those wannabe gangstas was packing heat? It's not a stretch, given that the Morris twins already have displayed a propensity for shooting unarmed civilians with Airsoft guns (and apparently touched off this latest brouhaha by shoving a football player down the stairs).

if you're a parent of a KU student (and thank Christ, I am not), aren't you a little concerned about your son or daughter getting hurt by crap like this? At what point does it become a public safety issue KU can't ignore anymore? Forget underage drinking, Dr. Bernadette Gray-Little. You have a much more serious problem to deal with in your first year as KU chancellor.

After a summer to forget, I'm just glad it's KU's turn to deal with bad press for a while. They may have come out of the audit squeaky clean (mostly), but eventually, the crap they pull on a regular basis is going to come to light.

We'll have more analysis soon, of course, but in the meantime, I'll leave you with a humorous interpretation of official KU policy at times such as this (image courtesy Chiefsfan42, on gopowercat.com): 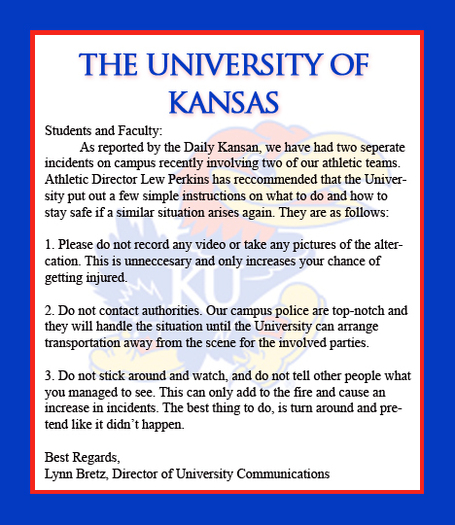