Adventures of the Big 12: Redemption (and a Man Named Texas A&M)

Share All sharing options for: Adventures of the Big 12: Redemption (and a Man Named Texas A&M) 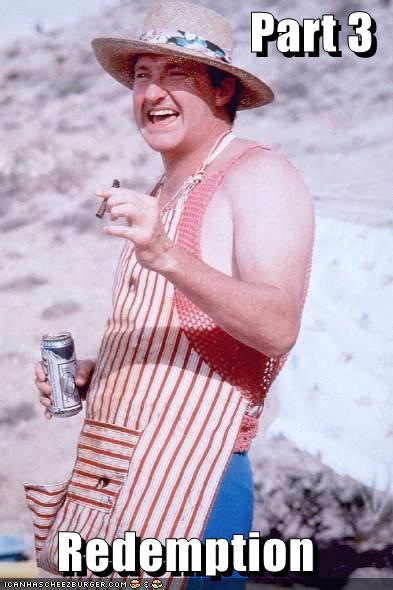 Because everyone was so patient, I've decided to put this up earlier than Monday. I won't get into the backstory because I'm sure you're all just wanting to find out how this story ends.

The guys are still scouring the jungle to find Texas A&M...

Missouri: Alright, I'm getting really, really tired. It's hot, it's muggy, and Oklahoma State smells awful. Jesus, what is that?

Oklahoma State: It's my cologne.

Missouri: Whatever it is, it's mixed with your sweat to create something worse than swamp ass. It's jungle island ass.

Oklahoma State: Shut your mouth foo'. I can't help it if I sweat out here.

Missouri: You're in a Goddamn velour jumpsuit. You could lose a layer; it wouldn't kill you.

Oklahoma State: It's Sean John. I'm not dumping a $200 jumpsuit into the jungle.

Oklahoma: I thought you were rich; why can't you just buy another one?

There's a snapping of twigs in the distance...

Nebraska: What was that?

Kansas State: I heard it too.

There's multiple pops and snaps in the distance, and it's moving closer...

Oklahoma: I told you fuckers something was watching us!

Texas: Calm down. Tech, you see anything over there?

Oklahoma: Someone offer them Baylor to go away.

Baylor: Now you hold on one minute...

Oklahoma: What? You aren't afraid to die. You've got Jesus on speed dial. It gives us a better chance to get away.

Baylor: That's so insulting that I don't even know where to start...

Texas: Alright, everybody, let's draw in close and circle the wagons. Does anyone have any weapons?

Nebraska: You've got full ones too.

Kansas State: Yeah, but I need those.

Texas: Alright, we have stuff to at least chuck at them. I've got a Swiss Army knife. Anyone got a lighter?

Oklahoma: What are you doing MacGyver? Trying to fashion a flame thrower?

Texas: Alright, someone give me their shirt...

Kansas: Here's mine. Who wants to party shirtless?

Kansas State: You're so creepy.

Texas: Now, I need to just get those beers from Kansas State.

Texas: Hey, give me those beers, dude.

Kansas State: Kiss my ass. I need them.

A large black and yellow bird-like creature pokes his head through the trees and stares at the group...

Nebraska: I think we need to leave. Now.

Texas: Uh, yeah, I think that would be a good idea. Let's just start backing away slowly...

Kansas State: I'm getting the hell out of here...

Kansas State starts running away. This startles the bird, and he starts charging the group. The rest of the group follows K-State's lead and runs like their asses are on fire...

Meanwhile, the legends, Steve, and Texas A&M charge the dock while the boatman hurriedly tries to get Iowa State off of the boat...

Boatman: Get off of the boat. Now!

Iowa State: Hold on! Who are you, why am I here, and why is Tommie Frazier running at us?!?

Boatman: I deliver people to this island who have no future hope for football success. That's why he's here, that's why you're here, and I need to get back to the mainland because NFL Training Camps have started, and I'll need to pick up Chase Daniel in the next few weeks. Also, I don't want to get my ass kicked today.

Iowa State: I'm not going anywhere! You take me back to the mainland with you!

Boatman: No, you belong here.

Iowa State: What about my friends?

Boatman: They were looking for someone else.

Texas A&M charges at the boat, screaming, but not entirely sure why...

Texas A&M: AAAAHHHHHHHHHHHHH!!!! I'M NOT ENTIRELY SURE WHY I'M RUNNING AT THE BOAT!!!!

Boatman: Okay, I'm done being nice. Off the boat.

Iowa State gets pushed off of the boat. His head hits a rock, and he passes out. However, the Boatman has trouble getting the boat started because, really, it is a rickety piece of shit...

Kliff Kingsbury: (Gasping for air...) I'm a quarterback for Christ's sake! What do you want from me?

Tommie Frazier: I was a quarterback, and I'm doing just fine!

Kingsbury: You were (gasp) a glorified (gasp) running back!

The legends get to the boat and grab the Boatman before he has a chance to escape. As predicted, he gets a thorough ass beating, and he's tossed off of the boat next to Iowa State. They get the boat started, and the legends, Steve, and Texas A&M all head out to sea...

Rocky Calmus: Texas A&M, what about your friends? You said they'd come for you?

Texas A&M: Yeah, we didn't see them, so they must not be here.

Frazier: Who was that guy?

Davis: That was Iowa State.

Frazier: Why didn't you save him?

Davis: Playing there didn't help me out much, so fuck 'em.

The boat heads back to the mainland, while the rest of the conference members have gotten away from the large yellow and black bird...

Texas: Jesus, that was close.

Oklahoma: No shit. What was that thing?

Kansas State: It was a Hawkeye.

Texas: What? How can you be sure?

Kansas State: Bill Snyder used to be one before he came to Kansas State. We know all about Hawkeyes.

Oklahoma: Come to think of it, he did look familiar.

Kansas State: Suuure he did. You probably thought he looked like a gator.

Missouri: Can we get our shit together please? We have to find that little dumbass and get back to the mainland. Practice has already started.

Texas: Okay, if my compass is right, we're actually headed west. That means we've gone from one side of the island to the other, and now we're on our way back. If he's not here, he's probably dead, and we can go back and tell Beebe we did everything we could.

Nebraska: Pretty much everyone else has anyway, so no big loss.

They hear snaps in the distance and a God-awful screeching sound...

The crew runs frantically towards the beach, but as they get closer, Iowa State comes to and starts following some of the tracks into the woods...

Iowa State: There are a lot of tracks here. They must have gone into the woods. I'll follow them and see where it takes me.

Iowa State unknowingly walks towards his conference mates as they run away from the Hawkeye. Meanwhile, in Miami...

Steve: We at mainland.

Davis: God, it feels good to be back.

Michael Bishop: You said it. Well, see ya.

Kingsbury: Where are you going?

Bishop: Well, since the AFL closed down, I'll probably head back up to Canada and see what's up there for me. Later.

Kingsbury: Tommie, what are you going to do now that you're back?

Frazier: I don't know. There's probably someone up in Nebraska that will give me a gig. If Eric Crouch can make a living signing footballs at furniture stores, I certainly can too. What about you?

Kingsbury: I'll probably get into coaching. Who knows?

Davis: Well, whatever we do, it's better than being stuck on that island. Isn't that right Steve?

Calmus: What will you do now, Steve?

Steve: I go to strip club and make rain. I been stuck with you for too long. Need to see women with big ta-tas.

Davis: Don't you think you need a new getup?

Texas A&M: I'm going to the dock to wait for them. That's where they told me to meet them, so that's where I'll go.

Davis: Alright, well, you go do that. Thank you for everything. Even though helping us was a complete and total accident, we're glad you did it.

Texas A&M: Me too. I like making new friends.

Steve: We all go separate ways now. See you all on flip side.

Everyone leaves and heads their separate ways. Back at the island, Iowa State hears screaming...

Iowa State: Wait! That may be the group...

Kansas shrieks in the distance like a ten year old girl...

Iowa State heroically charges towards the screaming. It gets louder and louder as he approaches them...

Texas: I can see someone running at us!

Baylor: Someone trip him and offer him to the Hawkeye!

Baylor: Fine, you pussies, I'll do it!

Baylor runs toward Iowa State. As Iowa State sees him, he charges even harder to save them. Baylor sticks his foot out, trips Iowa State, and screams...

Baylor: That was the plan. Peace. LET'S GO BOYS!!!

Texas: Well, we're finally back. No sign of Texas A&M. Let's try to figure out how to get off of this rock...

In the distance, an aircraft carrier can be seen, and two helicopters are headed for the beach...

Oklahoma: Well, I'll be damned. They came looking for us.

Texas: What happened? I didn't do anything...

Kansas State: Well, someone noticed we were gone.

The helicopters pick up the conference members and take them aboard the aircraft carrier, while aboard, they meet up with a familiar face...

Texas Tech: Well I'll be damned. How in the hell did you do this?

Texas A&M: I went back to the dock just like you guys told me to, and I saw that you weren't there. I thought you would come to look for me, but I never saw you on the island, so I figured you were lost. I made some new friends while I waited, and I told them you needed help.

Texas: They just helped you?

Texas A&M: Well, I told them the entire conference was missing, and ESPN said they needed to find you because they didn't know what they would do without the Red River Rivalry. Then they just got on their boats and came after you. They brought me along. I got a free hat.

Texas: That's...nice. Well, thank you for helping us. We did come to the island to look for you though. How did you get off of the island?

Texas A&M: Oh, it's a neat story! Steve found me and took me to his camp. Then, Tommie Frazier, Kliff Kingsbury, Troy Davis, Rocky Calmus, and Michael Bishop all took me to the beach, and we left on a boat after we beat the shit out of the guy driving it.

Kansas State: (Just stares at him for a minute...) Okay. Has anyone given him something to drink? Or drugs? Maybe crack?

Texas: Let's not ask too many questions. We're just glad to be headed back to civilization. Football season is starting, and we'll have enough to worry about over the next few months.

The guys head back home, while, back on the island... 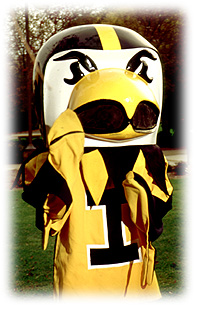