Adventures of the Big 12: Lost

Share All sharing options for: Adventures of the Big 12: Lost 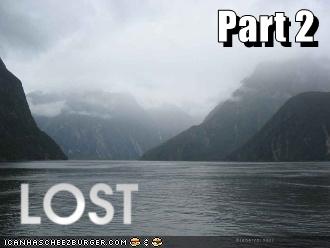 The second installment of this three part mini-series is here, and our friends have made their way, albiet unexpectedly, to the island. All the while, a forgotten member of the group has made his way to the party as well.

A cab pulls up to the marina where The Champions* left port a few hours before...

Iowa State: You're kidding me. You just drive me about five miles from the airport, and you expect me to pay you twenty-two dollars?

Iowa State: I'm not paying you that much.

Iowa State: This is highway robbery.

Cab Driver: Actually, it's street-side robbery. The highway is a mile that way. $24.00.

Cab Driver: You call this a tip?

Iowa State: Give me a break, dude.

Cab Driver: Alright, have a nice day. Beware of the homeless guys that try to rape you under the overpasses.

Iowa State: What did you just say?

The cab driver peels out and leaves Iowa State alone at the marina. Iowa State begins to look around the marina for The Champions*...

Dock Worker: Hey there. You looking for a big yacht with a bunch guys and chicks in Hooters outfits on it?

Iowa State: (sighs) Yeah, that's the one. So, I take it they've been here already.

Dock Worker: Oh yeah. They realized that one of their guys was lost and they went to look for him.

Iowa State: Really?!? They said they were going to look for me?

Dock Worker: Yeah, they said they were looking for their friend and that if they couldn't find him, some guy named "Beebee" would have their asses.

Iowa State: Beebe said that about me? I never thought that the commissioner and all of those guys cared that much about me. I figured they just viewed me as a tag along.

Dock Worker: Well, they seemed pretty interested in finding you.

Iowa State: Do you know where they went? I've tried calling them, but it's going straight to voicemail.

Dock Worker: Oh, well you're not going to get a signal at sea ma'boy. They said they'd be headed due east.

Iowa State: I wonder why they'd sail out onto the open sea looking for me?

Dock Worker: I don't know why either, but all I can tell you is that's where they went.

Iowa State: Hmm...okay. Well, is there anyway that I can get a boat or something to go after them?

Dock Worker: I've got a boat. She's not much of a looker, but we can follow them if you'd like.

Iowa State: I'd like that a lot! How much?

Iowa State: Uh, er, well, I don't have that much on me. How about a hundred now, and I'll get my friends to pay the other hundred when we find them?

Dock Worker: Deal. I'll get this thing all fired up and ready to go.

Iowa State and the Dock Worker board the boat and head out east to go find The Champions*. In the meantime, the rest of the members of the Big 12, sans Texas A&M of course, swam to the island shore after the yacht crashed against rocks in the fog...

Kansas State: What? Icebergs...rocks...big fucking things that you can run into and it will sink...what's the difference?

Texas: Sorry, man, it's just...well, I don't know where we are or how we're going to get home.

Kansas State: Just pull out some James Bond satellite phone you have stored in your shoe, and call for help.

Texas: I would, but it got soaked when we swam here, and it doesn't appear to have a signal.

Kansas State: I was kidding. You really had a satellite phone in your shoe?

Texas: Uh, yeah. I just forgot to bring the one that's waterproof.

Kansas State: You really are a piece of work.

Oklahoma: Hey, guys, can we focus here? We're stuck on an island in the middle of nowhere, it's foggy as shit, and I'm not quite positive, but I get the sinking feeling that we're being watched.

Nebraska: You're just being paranoid. There's nothing here but that big ass sea turtle over there, and she's not going to hurt anyone.

Missouri: Hey, guys, do you see that?

Missouri: Footprints. Human footprints. And they lead from the turtle back into those woods over there.

Texas Tech: Come to think of it, I think I see something in the distance. It looks like a yellow jet ski. I can't really tell though because it's so foggy. Hey Colorado! Run over there and see if that's a jet ski.

Colorado runs out of sight and back to the guys on the beach in a matter of seconds...

Colorado: I'm used to running around in a cloudy haze.

Texas Tech: Yeah, I can see that. Anyway, is that a jet ski?

Colorado: Yep, it is. And it said, "Property of Texas" with a longhorn on the back.

Texas: Hot dog! That's it! He's here, and I'd bet anything that those are his tracks leading into the woods.

Oklahoma: Well, let's go get that little retard and find a way to get off of this rock. I've got a football season to get ready for.

Texas: We all do, dumbass.

The group starts following the tracks into the woods. Meanwhile, Texas A&M is in camp with Steve and his tribe...

Steve: Ev-ray-one. Listen up. This Tex-ass am. He our guest.

Tommie Frazier: Who are you calling a Mexican?

Frazier: What the? Are you retarded?

Frazier: This idiot just waltzes into camp and says, "Hey, Mexicans!" I'm not a Mexican.

Texas A&M: Hey, er, do you have any burritos? I'm hungry.

Frazier: Alright, that's it! I'm going to kick your ass!

Texas A&M: I'd take a gordita if you've got one?

Tommie Frazier goes to punch A&M, but a cloaked, bearded figure in walks up and catches Frazier's punch. He pulls down his hood and with a fiery look in his eyes, says...

Frazier: Oh, so you sit there over there for three weeks with your cloaked, bearded, brooding ass, and now you're going to finally say something. Who are you anyway?

Cloaked Man: My name is Kliff Kingsbury, and I'm one of the most decorated college football players of all-time.

Frazier: So am I, but you don't see me looking like Obi Wan Kenobi and acting like a mute.

Kingsbury: Look, you've been here for a while. I just got here, and it takes time to adjust. I'm sure you understand.

Texas A&M: Who are you guys?

Kingsbury: I thought that I was going to a tryout for some Caribbean league team. Next thing I knew, some guy with a rickety piece of shit brought me here. With all of the fog, smoke, and brooding darkness, it was like crossing the river Styx. I'm still not 100% certain that I'm not in Hell.

Rocky Calmus: None of us are certain that we aren't in Hell.

Texas A&M: I remember you! How did you get here!?!

Michael Bishop: They said there was an arena league team in the Dominican Republic. I figured that I'd check it out. The same guy with the piece of shit boat brought me here too.

Texas A&M: Wow. That's really sad. I'm glad that I didn't meet that guy. He sounds like a meanie.

Frazier: Interesting. The boatmen only brings you here after you no longer have any chance at athletic success.

Steve: An-cent prophecy say that man who cross the big water will free us from the island. If boatman did not bring re-tard here, maybe he the one prophecy speak of.

Texas A&M stands there staring at a tree while picking his ass...

Davis: Hey, there, Texas am

Texas A&M: My name is Texas A AND M. Not Texas am. Sheesh!

Davis: There, Steve, you see? It's broken. He can't be the one that will get us off of this island.

Texas A&M: But my friends are coming. Maybe they can get us off of the island?

Texas A&M: My friend Texas has a boat. All of our friends are coming.

Kingsbury: Did you say Texas is coming? He'll come with a rescue party for sure!

Texas A&M: Yep. All of my friends are coming.

Texas A&M: I don't know who that is. So probably not.

Kingsbury: We head back to the beach where the jet ski is, and we light a signal fire.

Frazier: Good idea. Men, let's get our stuff organized and prepare a move to the beach.

The lost legends, Steve, and Texas A&M all gather camp and get ready to head to the beach. Meanwhile, the guys have made their way into the jungle in their search for Texas A&M...

Kansas State: Good God, this is some thick vegetation.

Nebraska: Oh, grow up you pansy. It's just like walking through a corn field.

Missouri: Except this corn field is crawling with some ungodly looking bugs.

Texas: Will you all shut up? It's hard enough following his tracks as it is.

Texas Tech: We could follow the trail of fun size Snickers wrappers he left lying around.

Oklahoma: Shit, that's funny. Quite the leader you are.

The group follows the wrappers deeper into the jungle. Meanwhile, at a rickety dock somewhere on the island...

Iowa State: You think this is where they went?

Dock Worker: I'm sure of it.

Iowa State: It doesn't look like anyone is here. Is this island even on the map?

Dock Worker: Probably not. There aren't many people who know about it.

Iowa State: How do you?

Dock Worker: I bring people here from time to time. They're a lot like you; they're looking for something or someone. I help them get to where they need to go.

At that moment, the legends stumble upon Iowa State and the Dock Worker...

Dock Worker: (To Iowa State...) It's time for you to get off of the boat and meet your new friends. I need to leave.

Davis: (Yelling at Iowa State...) Don't let him get away!

Iowa State: Who are you?

Dock Worker: I'm the boatman, and you're home now.

Come back Friday for the exciting conclusion to the Adventures mini-series!