In our first positional breakdown, we'll take a look at the most important position on the field, and possibly one of the biggest question marks going into the 2009 season: quarterback.

After Josh Freeman decided to forfeit his final year of eligibility in favor of becoming a filthy rich mofo first-round NFL draft pick, a giant vacuum appeared.  Ever since Freeman took the reins during the second half of the Baylor game back in 2006, Kansas State knew exactly who its starting quarterback would be, and regardless of what some folks may or may not have thought about his leadership abilities, the young man was a wildly talented individual who would have undoubtedly made this team much better in 2009 had he returned.

Of course, a $36 million dollar contract and NFL glory prevented the dream scenario of Josh Freeman finally becoming the fan favorite and KSU legend we all wished he would become, but that doesn't necessarily mean that the cupboard is bare and all hope is lost.

Click the jump to get our roster breakdown for the 2009 Kansas State Quarterbacks.

The first thing that jumps out at you when you look at Carson Coffman is, "Man, the kid's got good genes."  Most KSU fans are aware of his pedigree, so I won't rehash all of that.  The second thing that pops out at you is that aside from being a U.S. Army All-American (or something like that), Carson couldn't have had a more decorated prep career.  He never lost a game he started, Reymore-Peculiar won two state championships, and Carson was named the 2005 Missouri Class 5 Offensive Player of the Year.  He also had a 5-1 TD/INT ratio to boot.  Honestly, what more could you ask for?

Well, apparently,the recruiting services weren't impressed with Coffman's prep career.  Rivals.com had him rated as a low two-star prospect, and his only other recorded offer was from North Texas.  In fact, Ron Prince didn't even offer him a an immediate scholarship; he initially accepted a grayshirt offer from the Wildcats.  However, due to the "Great Quarterback Migration of 2006" that left KSU with two scholarship quarterbacks as soon as fall camp ended (Freeman and Dylan Meier), Coffman was forced into duty.  He redshirted that year as the third-string quarterback, and for the last two years has served as Freeman's backup.  His career numbers, thus far, are indicative of a guy who gets his opportunities in mop up duty (Stats courtesy of www.kstatesports.com):

Again, those are pretty normal numbers for a guy who primarily got his reps when the outcome of the game wasn't in question.  Given that those stats would probably look decent over the course of a couple of games in Snyder's old dual-threat offense, it's not that far fetched to think of Coffman as the starter going into the 2009 season.

And, truthfully, Coffman most likely will be the starting QB for the first game against UMass.  He was easily the best QB in the Spring Game, and after a 25/36, 334 yd, 3 TD/0 INT performance, it seems like he is the obvious choice to lead the team.  Especially after they voted him as both a player representative and captain for the season.

However, given what we've come to envision as a "Snyder" QB, Coffman doesn't necessarily seem to fit the mold.  He's not as mobile as Ell Roberson, nor does he have the cannon arm of Michael Bishop.  But he does "seem", based on his high school career, to have the same kind of gritty determination and winner's attitude that Jonathan Beasley had.  While Beasley was the quarterback at KSU, the Wildcats went 22-4, and they won both Bowl Games that Beasley started ('99 Holiday, '01 Cotton). Coffman seems to have a lot of the intangibles that Bill Snyder likes in his quarterbacks, and the same intangibles that Beasley exhibited: intelligence, toughness, leadership, and confidence.  While those platitudes may seem like usual things people say about non-talented quarterbacks, there is a certain undersized quarterback in Lawrence, KS with those same attributes, and he does well enough for himself despite his own physical limitations.

The key for Carson Coffman, if he wishes to be the starting quarterback, is to play to his strengths and be a game manager.  Don't do anything flashy; just get the ball to the playmakers (Brandon Banks, Daniel Thomas, Lamark Brown, Jeron Mastrud) while limiting turnovers.  If he can hold onto the ball on running plays and consistently move the chains, he'll be an adequate quarterback capable of leading this team to a bowl game.  However, if he tries to gain yards by throwing deep and taking the same kinds of risks Freeman did, he'll find himself buried on the bench because he simply doesn't have arm to be a gun slinging QB.

This video should illustrate that point.  It shows good examples of both.

Grant Gregory is an intriguing prospect.  Here's a sixth year senior who took advantage of that odd NCAA rule that allows players with remaining eligibility and a bachelor's degree to transfer to another school without sitting out a year.   Don't ask me how he got that sixth year; I have no idea.  I assume it was an injury, but who knows?

Obviously, since I haven't spent a lot of time watching South Florida the past few years (especially games where the second string QB would get to play), I'm not exactly sure what Gregory's true strengths are.  What we do know is that Jim Leavitt and Bill Snyder are good friends, and if Leavitt thinks he's good enough for Kansas State, Bill Snyder probably won't argue about it.  Also, we know that USF likes them some dual-threat QB's, and we know that Kansas State likes them some dual-threat QB's too.  Therefore, logically, we're a good fit...right? (It's a stretch, but again, I haven't really seen him play.)

One thing that we do know about Gregory is his apparent toughness and physicality.  Check out this video to see exhibit A: toughness.

Grant Gregory takes a lickin', keeps on tickin'! (via mattgrothedotcom)

And here's exhibit B: physicality. 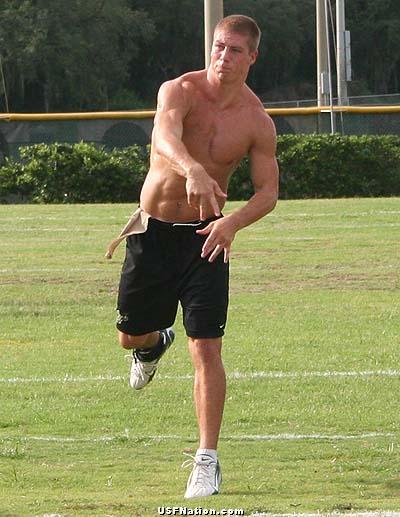 Truthfully, though, from what we can glean, Gregory looks to be a tough, physical player that (presumably) has some multi-dimensional capabilities.  Does that mean he has what it takes to beat out Coffman?  I don't know, but I do know that he has the interview skills of a veteran QB.

If you answered Collin Klein, you'd be correct.  When he signed with KSU, he was a high three-star player and the #21 Pro-style QB in the 2008 class.  The #1 QB prospect out of Colorado that year, Klein came out of Loveland as a pro-style QB, but his recruiting videos showed a young man who did most of his work out of the shotgun spread, which, oddly enough, seems to be a formation that Bill Snyder will like to run if the Spring Game is any indicator.  After watching the Spring Game again on Powercat Passport, it seems like all Klein did was operate out of the shotgun spread, and he did a decent job going 5-11 with 42 yards.  Considering that he did that with the second team offense against the first team defense, it wasn't too bad.  He also rushed ten times for 36 yards.

Truthfully, based on the system Klein ran in high school, it's almost serendipity that Bill Snyder returned.  Klein seems to have an ideal mix of talents (size, arm strength, speed, experience in a similar system) for this offense, but the one thing that he has going against him, youth, will probably keep him off of the field for the majority of 2009.

Joe Kassanavoid, like Klein, is another interesting redshirt freshman prospect.  After a successful prep career in Lawson, MO (What is it with Prince and Missouri QB's?), there were questions about whether Kassanavoid would skip college altogether and pursue a professional baseball career.  However, he ended up signing with Prince and Kansas State after guiding Lawson to a Missouri Class 2 Championship.

There really isn't a lot to say about Kassanavoid that you can't get from his vitals and bio.  He's a big kid with a strong arm.  An injury to his hand during the Spring Game limited his production (3-10, 1 INT), but like Klein, he has the physical size and arm strength to compete for the job later on down the road.  But at this point, it would probably be outlandish to consider him for the starting role.

Fun fact: I met his mother and sister at a Casey's General Store in Excelsior Springs, Missouri after my wife and I went to pick out hardware for our cabinets.  They seemed like nice people.  I don't know why I remember that, but I do.

Given the fact that Coffman had a chance to go through Spring Practice, digest more of Bill Snyder's massive playbook, and mostly due to the fact that he's an established leader in the locker room, you have to give him the nod for the first game against UMass.  However, don't be surprised if Grant Gregory ends up getting some playing time if Coffman struggles in the first couple of games.  The last few times Snyder's had a close QB battle on his hands, he wasn't afraid to start playing musical chairs (Dunn vs. Roberson - 2001/2002, Meier vs. Webb - 2004, Webb vs. Evridge - 2005) until he found the guy that was able to give him what he wants.  Given that these seem to be two mature, intelligent guys, it should make for an interesting battle.  Until we see more of what Gregory can do, though, it would be hard to say that he'll start over a team captain and clear "#1" coming out of fall camp.