Adventures of the Big 12: The Search for Texas A&M

Share All sharing options for: Adventures of the Big 12: The Search for Texas A&M 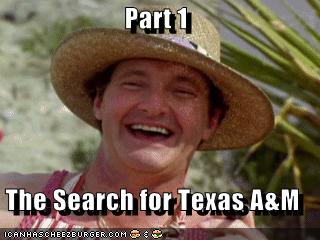 Well, ladies and gentlemen, after a long break, our friends from the Big 12 have returned for more of their wacky adventures.

The last time we saw them, they were enjoying Spring Break in Daytona Beach. The action picks up right where they left off back in April, and as the title of the story implies, our old friend, Texas A&M, has gotten himself lost while riding up and down the Florida coast on his jet ski.

Click the jump for the first part in this epic mini-series!

A Sea-Doo watercraft drifts towards the shore of a small and seemingly deserted island somewhere due east of the Florida coast. The passenger, with several days worth of stubble, a torn up shirt, Hurley board shorts, and rubber ducky arm floats is splayed across the jet ski, passed out. The watercraft moves lazily towards the shore and ultimately makes landfall a few yards away from a large sea turtle sitting on the beach...

(The man's eyes flutter open as he becomes started by the sound of seagulls flying overhead...)

Texas A&M: Ugh. Where am I? What happened to the talking dolphins? I'm hungry.

(Texas A&M pulls himself off of the jet ski and sees the sea turtle covering the nest of her recently deposited eggs...)

(Texas A&M walks over to the nest and tries to shoo the turtle. It doesn't move...)

(The sea turtle doesn't budge and looks quite bored with the whole ordeal...)

(Texas A&M sees a tree line in the distance and makes his way towards it thinking there will be a McDonald's or Sonic on the other side...)

Meanwhile, on his yacht, The Champions*, Texas and the rest of the Big 12 members (sans Iowa State) dock at a marina somewhere in Miami...

Kansas State: Man, what a vacation! That was exactly what I needed.

Missouri: I know. That was great. I can't remember the last time I had that much fun. 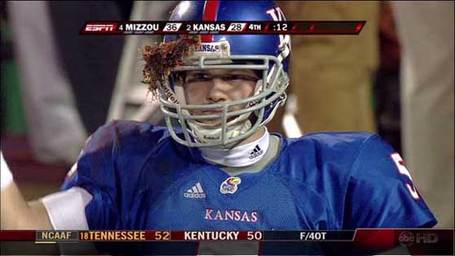 Missouri: Well, maybe that one time...

Nebraska: I've gotta hand it to you, Texas, you sure know how to roll in style.

Texas: Thanks, man. I appreciate that. I'm a pretty lucky guy.

(The Hooters girls deboard, and Texas give one a slap on the ass...)

Texas: Thanks for coming aboard ladies. I'll give you a ring when I swing back through town.

Missouri: God, I want to be you.

Texas: I get that a lot.

Oklahoma: Pssshhh. I don't see what's so great about a yacht, a Godzillatron, an infinite budget, and a slew of beautiful girls.

Kansas State: I've got a theory about why you don't care about the girls... 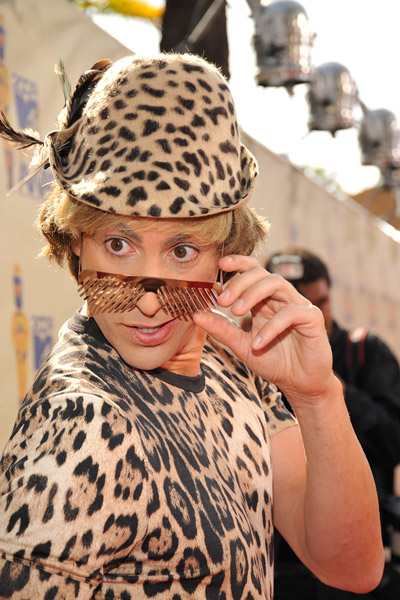 (Everyone looks away and the subject quickly changes...)

Texas: So, is everyone present and accounted for?

Texas Tech: I think so...wait; has anyone seen A&M?

Texas: He was supposed to meet us here. Of course, he could could be running late.

Baylor: Well, you gave Forrest Gump a jet ski and a Garmin, and you told him to meet us in a different city. You honestly think he's just running behind? He can't even tell time. Heck, he can't even tie his own shoes.

Texas: True. But Okie State can't tie his own shoes either, and he found his way on the yacht before we left Daytona.

Oklahoma State: Listen foo'. I don't know how to tie my shoes because I pay people to do it for me. At least I did before the economy went into the tizzank.

Texas Tech: What do you do now?

Missouri: Well, the dumb sombitch isn't answering his cell phone either. But, man, he's got an interesting voicemail greeting.

Nebraska: What is it.

(Missouri calls A&M and puts his cell on speaker phone...)

Generic Voicemail Greeting: You have reached the voice mailbox of...

Voice of Texas A&M: This phone looks like a yellow pickle!

Generic Voicemail Greeting: If you'd still like to leave a message for this person...

Texas: Goddamn it. Everyone back on the boat. If we don't find him, Beebe's gonna have my ass.

The group reboards the yacht and heads out to sea. In the meantime, back on the island...

TexasA&M: Eh? What was that sound?

Texas A&M spins around to see a native standing behind him... 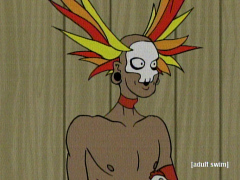 Native: You call me Steve.

Texas A&M: Hi Steve! Do you know where I can find a Whataburger?

Texas A&M: It's a place where you get food.

Steve: Ah, food. We get food from hunting, fishing, and people from Flo-rida that empty metal cans and get lost sailing on the big water. They usually bring Corn Nuts. We like Corn Nuts. Do you have corn nuts?

Texas A&M: I have a friend that's a Corn Nut. He's from Nebraska.

Native: I've never heard of this Nub-bras-ka. Is that near Flo-rida?

Texas A&M: No. But they used to go there to play for bowls made out of oranges.

Steve: We make our bowls from coconuts.

Steve: You come back to my village. I will give you coconuts.

Texas A&M: Cool! Do you have a McDonald's?

Texas A&M: It's a place where you get food.

Steve: You not smart right?

As The Champions* speeds off into the Caribbean in their search for Texas A&M, the gang keeps themselves busy aboard the yacht...

Kansas State: Hey, do we have ANYTHING to drink on this boat other than Shiner Bock?

Texas: No. We only drink Shiner Bock here. Do you have a problem with that?

Kansas State: Well, I'm just saying...after drinking a couple of sixers, I'd like something different.

Missouri: You've had a couple sixers already? We just left port an hour ago.

Kansas State: It's going to be a long season; I've got to get my liver ready.

Texas Tech: (psst) I smuggled some Lone Star on the boat. You want some?

Kansas State: Ah, Hell, why not? I can appreciate the irony of slumming it on a yacht.

Texas Tech: You're shitting me. He knows how to use a computer?

Nebraska: Yep He's got pictures and everything.

Missouri: (Looks at Texas...) Wait, how do you have the Internet on this thing?

Texas: You're seriously asking me that?

Missouri: Good point. I should have figured you'd have access to a 3G network or something.

Missouri: I hate you.

Baylor immediately drops to his knees and prays for what he's just seen...

Oklahoma: I'm pretty sure the FBI is tracking you right now for accessing that page.

Texas: What are you guys looking at...OH MY JESUS FUCKING CHRIST WHAT IS HE DOING TO THAT HORSE?!?

Kansas State: Shut your hole, or I'll shut it for you.

Oklahoma State: Yo! Bitches! There's somethin' off the Starbucks bow!

Oklahoma State: Man, whatever. There's a bunch of fog and smoke and I think I saw an island.

Texas: That can't be right. The maps don't show that there's supposed to be an island here, and Texas A&M's GPS coordinates say he should be 100 miles away. Err, at least that's what it said a few minutes ago.

Oklahoma: Wait a minute...where did you say we were sailing?

Oklahoma: Is this Cuba?

Texas looks out the window and sizes up the island...

Texas: No, it's too small to be Cuba.

Nebraska: Wait, you know what else is southeast of Miami...the Bermuda Triangle.

Nebraska: Yeah, well it's a myth that Kansas ever wins without cheating, but they've got banners nonetheless.

Texas: How do you know that this is the Bermuda Triangle?

Kansas State: Uh, guys, it's getting kind of foggy out here. Are we going to hit an iceberg or something?

Missouri: Um, we're in the middle of the Caribbean. No, we're not going to hit an iceberg.

Kansas State: Well, what the fuck is that?

The yacht hits a large object, and the group abandons ship in order to save themselves...

Come back Monday for the next installment of this epic mini-series!