Share All sharing options for: Programming Note - We Hath Returned 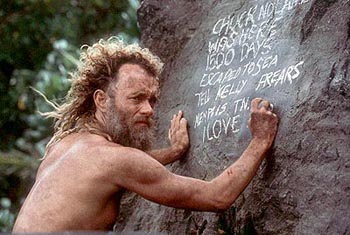 My attempts at blogging this summer were thwarted when I realized that chalk was not transmittable over the Interwebs.

Well, guys and gals, we're back after an extended (yet somewhat unplanned) hiatus. Between bar exams, career required activities, and building a retaining wall that your wife likes to downplay by calling it a "flowerbed", we have returned to comment on our beloved Kansas State Wildcats.

Now, most of you are saying, "Hey, PJ, wasn't there a lot to talk about this summer? I mean, after the audit, we saw some recruit commitments, decommitments, Bill Snyder was in USA Today, and Todd Reesing was seen in a picture that could only be described as 'odd'." Yes, faithful readers, there probably was a lot to talk about, and yes, we probably let some of you down. However, after the collective kick in the nuts that was the months of May/June, I think all of us here at BOTC, and KSU fans in general, needed a break to recharge the batteries and get ready for the academic/athletic year ahead. I think we accomplished that, fan and blogger alike.

So, with the start of Big 12 Media Days this week, and the start of practice less than two weeks away, there will be much more activity in the coming days. There is a post about Big 12 rivalries that I was supposed to put up about two weeks ago that I will have ready for you tomorrow morning, and there is a new "Adventures" story in the works as well. It's still in the early stages, and it's more of a mini-series than a post, so it's taking a lot of time. However, so far I'm pleased with it, and I hope you will be too.

Also, now that the official rosters are out on K-StateSports.com, and we know who stayed, who left, and who qualified (for the most part), we'll be doing positional breakdowns so you know a little bit more about the team when you, your friends and your family all head down Bill Snyder Highway on your way to Bill Snyder Family Stadium on September 5th to see, appropriately, Bill Snyder lay the smackdown on a FCS in the stadium that bears his name.

For those of you who have kept coming back over the summer, we appreciate it. TB, EMAW, BracketCat, and I are back, or will be soon, and we look forward to this very newsworthy year ahead.