A K-State Fan's Guide to Houston

Share All sharing options for: A K-State Fan's Guide to Houston 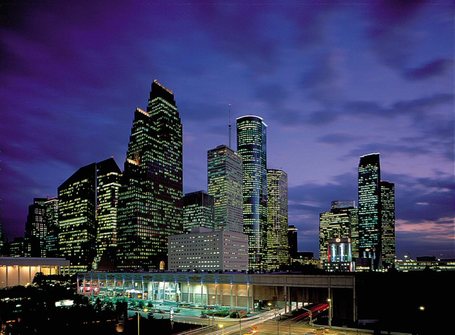 It really burns me that K-State gets sent to a regional in Houston a mere two weeks after I move away, but them's the breaks, I guess.  For any K-State fans who may be making the trek to the fourth-largest city in the country this weekend, here is an inside look from a guy who lived there for three years.

Even if big cities intimidate you, I think you'll find Houston surprisingly easy to navigate.  The only area you need concern yourself with is the Inner Loop, or the area of the city encompassed by I-610 (the Loop, with different names depending on which side of it you are on, i.e., north, south, east or west), which makes a fairly small loop around downtown and the inner neighborhoods, including Rice University.  From there, you have I-10 (the Katy Freeway west of downtown, the Baytown East Freeway east of it) running east-to-west, I-45 (the North Freeway north of downtown, the Gulf Freeway south of it) running north-to-south, U.S. 59 (the Southwest Freeway south of downtown, the Eastex Freeway north of it) running southwest-to-northeast, and Texas 288 (the South Freeway) running north to south where I-45 and U.S. 59 meet just south of downtown.  It will also greatly help you to know the freeway names, which are listed as relevant above.  You will probably only need the Southwest Freeway to get to Rice, but depending on what part of the city you are staying in, you may need others.

Being a former resident, I'm not terribly familiar with hotels.  When I visited before moving there, I stayed at a Holiday Inn Express in downtown.  If you stay there, you could take the Metrorail train from downtown to Rice and walk to the ballpark, although it's a bit of a walk from the hotel to the rail.  If you stay in downtown or the Medical Center area (located very close to Rice), you can probably take the light rail to and from the ballpark.

There are quite a few hotels located near Reliant Stadium, which is a few miles south of Rice, at the intersection of I-610 (the South Loop) and Kirby Drive.  Like many other neighborhoods in Houston, this area is kind of hit or miss, with some areas along South Main Street and Old Spanish Trail being more miss than hit, but as long as you're aware of your surrounding you should be pretty safe.

The Galleria is probably the most popular hotel area for those wanting to be near the Inner Loop.  There are plenty of places to stay over there, and the neighborhood is nice, but it's not as convenient to Rice as the other areas listed.

Houston is known for its food, and it has everything you could possibly want.

My top pick would be Chuy's, located at Westheimer and Kirby.  A little farther west, there's a place called Chacho's that's pretty good, too.  If you want to get sideways from margaritas, you should hit up El Patio and order the blue ritas.  For a trendier, pricier pick, try Cyclone Anaya's.

Goode Co. Seafood is the pick inside the Loop.  As an added bonus, it's located very close to Rice, just off Kirby Drive south of U.S. 59.  Don't miss the campechana appetizer.  If you have some time and want to see the Gulf, head down to Galveston and try Gaido's or over to Kemah and check out Flying Dutchman.  If boiled crawfish is your thing, check out Ragin' Cajun.  Please, please don't eat at Joe's Crab Shack.

If you are looking for Kansas City barbecue, you will not find it here.  Texas bbq relies more on dry rubs and slow cooking and less on sauce, but there are some pretty good places here.  Goode Co. Barbecue is located near Rice, and features excellent dirty rice and jambalaya.  I happen to also be a fan of Gabby's, which has several locations, but the one I always went to is at 610 (South Loop) and Telephone Road.  They have good happy hour specials, too, with cheap beer and margaritas.  Another place that is fairly near Rice is Luling City Market, at Richmond and 610 (West Loop).  It's small, quaint, and doesn't have a lot on the menu, but the meat is good, the sauce is decent, and the sides are good.  Go there in the evening and endear yourselves to the regulars by talking some Big 12 sports (they'll likely be Longhorn fans).

We'll go by district here, with specific bar locations under each.

A trendier, younger crowd.  Some places will have dress codes on the weekend (ahem, Pub Fiction, ahem), but they're usually not too restrictive, only barring shorts and tennis shoes in most cases.  We've had fun at Pub Fiction, Red Door, Tipsy Clover, Whiskey Creek and Cyclone Anaya's.  If you want a little (or a lot) less scene, check out The Wet Spot or Christian's Tailgate.  Also, if you just want something to drink at the hotel, you can't miss the Spec's Liquor Store on Louisiana Street.  If you can't find it there, then they probably don't brew it, and I'm only sort of kidding.  You can also get a good lunch and check out the walk-in humidor.

As the name implies, this is Rice's version of Aggieville.  It leans a little heavier on the shopping than the 'ville, but it does have some good places to have a few.  It's also a more casual experience than Midtown.  If you're a beer connoisseur, don't miss The Gingerman, which has an extensive selection.  Right next door is Lil Woodrows, where I've always had a good time.  If you want to have dinner and drink all in the same place, you might try Brian O'Neills, which is an Irish bar and restaurant right down the street from the other two.

Unlike other universities in Houston, Rice is located in a nice, upscale, relatively safe neighborhood.  The campus is more or less triangular in shape, and it's kind of a hike to get across all of it.  Enjoy the stately old trees that overhand the streets.  You might also stroll by Rice Stadium, an old gem on the west side of campus.  Be prepared if you run into any Rice students, as they tend a little toward the socially awkward side of the spectrum.

When business time rolls around, head over to beautiful Reckling Park in the southwest corner of campus.  I have never been privileged to witness a game from inside, but the view of the Texas Medical Center skyline is second to none and I understand that facilities have been recently updated.

That's it for my guide.  If you have any specific questions that I didn't answer here, send me an email at bringonthecats -at- gmail -dot- com