Click the jump for your daily K-State Wildcats news fix.

Sorry the Slate has gone away for a while.  It's back today to get you caught up with everything that's happening in Wildcatland.  Considering that it's the offseason, it should be a lot quieter than this.

K-State defeated KU, 5-4, and Baylor, 9-4, in pool play at the Big 12 Tournament in Oklahoma City.  The Cats take on Texas tomorrow, with the winner advancing to the championship game against whomever wins Pool 2.

Crimson and Cream Machine blogger ccmachine was on hand at Bricktown Ballpark last night, and was kind enough to send along a few snapshots from the game.  Here's one of A.J. Morris, wheeling and dealing. 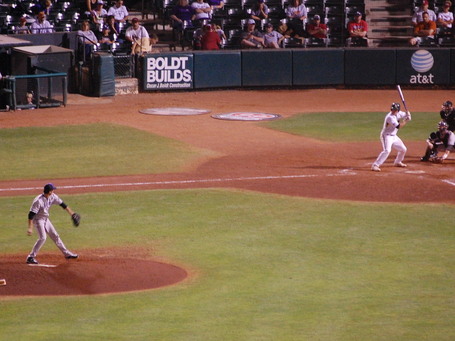 Jeffrey Martin, who has been doing a fabulous job with this story, reports that new athletic director John Currie has a lot of work to do to rebuild K-State fans' trust in the athletic department.

K-State officials maintain they are shocked by the secret deal between Krause and Prince.

The assistant attorney for K-State has reserved the limited-liability company name "In Pursuit of Perfection" in the state of Kansas.  J-Mart's story indicates that Peter Paukstelis reserved the name on Thursday morning.  Interestingly, BOTC reader MadCat emailed me on Wednesday evening suggesting that we here at BOTC take that very action, collect the money, and donate it back to K-State.  I thought he was joking, so I kind of laughed it off.  However, MadCat also informs me that, on Wednesday evening, he also sent a similar email to Paukstelis.  Interesting timing here.

Unfortunately, two more players have left Frank Martin's squad, as Buchi Awaji made his transfer official, and Fred Brown is also leaving Manhattan.  Best of luck in the future, gentlemen.

On a bright note, Florida guard Martavious Irving has signed with the Wildcats.  You can read more about Irving here.

Former K-Stater Aaron Watkins is in the top 10 after the first day of the Byron Nelson Classic in Dallas, a very good PGA Tour event.  Keep it going, Aaron!

The news wasn't so good for current Wildcat golfers, as the team finished in 12th place at the NCAA West Regional, failing to qualify for the NCAA Tournament.  Still, a very good season by the team to make a Regional again, and congrats to Coach Tim Norris and all the players.  On a bright note personally, my friend John Hurley (Texas A&M) played very well and finished in the top 20.