As I generally do when K-State travels to Austin to take on the Longhorns, I made the trip up from Houston to take in the action.  Following the suggestion of a good friend, I went to the game on Friday to catch A.J. Morris, the best pitcher in the country this year, in action.

I was not disappointed.  Morris threw a complete game, 140-pitch gem to carry K-State to a victory on Friday night.  For Morris, the game got off to a nervous start as he gave up single tallies to Texas in the first and third inning.  However, Morris proceeded to settle down and from the fourth inning on he was simply dealing.  The woman in front of us was keeping score and notified me he had passed the 120-pitch mark sometime in the eighth or ninth inning, prompting concern that he may be running out of gas.  Indeed, the Longhorns put the tying run on base, prompting Brad Hill to visit with his ace on the mound.  I wasn't anywhere near earshot of that conversation, but I have the feeling Morris told him there was no way in hell he was coming out of the game.  After the disaster last Friday against Missouri, who could blame him?

Anyway, Morris was golden, but on the batting side, the congrats go to Justin Bloxom and Jason King.  Their back-to-back home runs in the sixth inning got the Wildcats back into the game after multiple missed chances earlier.

On Saturday, a group of Longhorns and this intrepid Wildcat decided to catch the game from the party bus parked just beyond UFCUDFF's left-field wall.  It's actually a pretty nice view from out there, and you get to drink beer because you're not in the stadium. 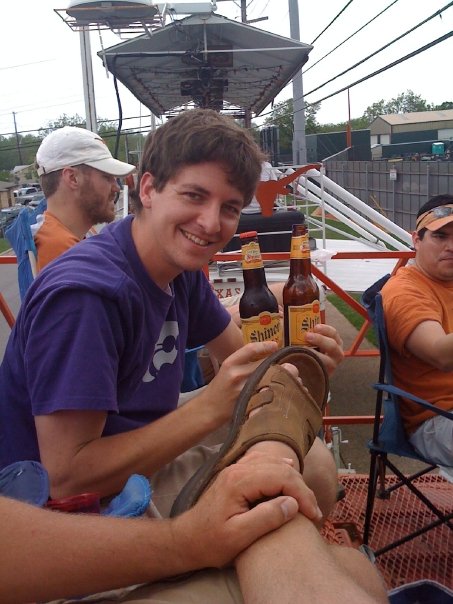 I just know Pan is going to have a field day with this one.

Saturday's game was another low-scoring affair.  K-State's Lance Hoge pitched well after a difficult first inning and Jordan Cruz delivered a two-run bomb in the second inning to tie the game up.  From there, both teams threw a bunch of zeroes on the board, sending the game to extra frames.  After matching two-sports in the 11th inning, Nick Martini's RBI single delivered what would prove to be the winning run for the Wildcats.  The game's MVP had to be reliever James Allen, who worked out of a bases-loaded, one-out jam in the ninth to send the game to extra innings.

Saturday's game would also mark the end of my weekend in Austin, as school commitments required me to get back to Houston.  I was very impressed with University Federal Credit Union -- Disch Falk Field.  A few years ago, I remember seeing the stadium on TV and coming away pretty unimpressed given the history of Texas baseball and the money at their disposal.  The renovation appears to have addressed whatever the deficiencies the old stadium suffered. 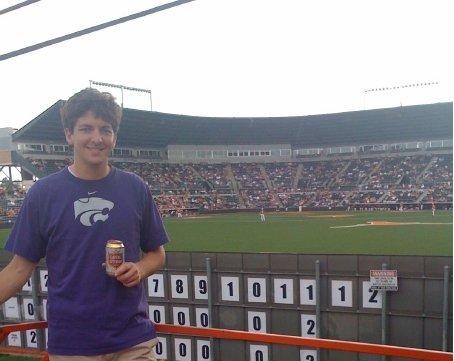 Yeah, if Pan's going to make fun of me for drinking Shiner, I can only imagine what he'll say about Lone Star.

On Sunday, the hex that I have over Texas had retreated to the semi-safe distance of Houston, permitting Texas to scratch out a tie with K-State.  Certainly both teams had their chances to put the game away at various points, but in the bottom of the ninth and leading 6-5, K-State had Texas down to its last strike.  Unfortunately for the Wildcats, Texas mustered an RBI single to tie the game, and after a scoreless 10th inning, the game ended in a tie due to the Big 12 travel rules.

The 2-0-1 weekend keeps K-State in fourth place in the conference standings.  Next weekend, the Bat Cats are on the road again as they travel to Stillwater to take on Oklahoma State.