Share All sharing options for: Ron Anderson, Scholarship Numbers, and What's Next?

Obviously, the big news of the day is the announcement that Ron Anderson will be transferring from the Kansas State basketball program.  While this has been rumored for some time, it finally became official this afternoon when the Associated Press broke the story.

Let me be the first to say that I'm not happy that he's transferring.  I'm not happy when any player decides to leave Kansas State, especially one that played as hard and enjoyed wearing the colors as much as Anderson did.  However, in the game of musical chairs that occurs after a bumper recruiting crop (headed by a McDonald's and Jordan Brand All-American) signs with your school, it's only natural to expect some attrition.  And when the headliner of the class (Wally Judge), and a transfer from a perennial power (Curtis Kelly) will enter the rotation at your position the following year, it's easy to see why Anderson would transfer.

Now, I'm not saying playing time (or lack therof) is why Anderson is transferring.  I have no idea.  None of the articles out there have identified this as a reason, so I'm just putting my "fan hat" on and am speculating as to the reason.  Due to the non-signing of Devon Peterson, Abdul Herrera leaving the team, Darren Kent graduating, and the reclamation of a lost scholarship due to a low academic progress rating (APR) for the 2007-2008 season, Kansas State has enough scholarships to cover all roster players and signed recruits.  Therefore, Ron Anderson didn't have to transfer.  As of right now, K-State doesn't have another commitment, but they are pursuing two prep players.

A source told [Jeffrey Martin] that [Martavious] Irving and [Latavious] Williams are the last two targets for the Class of 2009, an impressive group that already includes Wally Judge, a McDonald’s All-American who will be action this weekend in the Jordan Brand Classic, Rodney McGruder and Nick Russell.

Does this mean that Ron was asked to leave to make room for new players?  Or are the coaches recruiting players because Anderson planned on leaving?  I'm not sure, and it would be unfair to insinuate that I know the answer.  So, I'm not going to go there.  All we can do is look to the future, and given that Anderson has chosen to transfer, where does that put K-State in terms of scholarship numbers? Here's the breakdown:

Given that the scholarship limit is thirteen players, the transfer of Anderson gives KSU one more spot available for the 2009-2010 season. So, who does it go to? Martavious Irving or Latavious Williams?

Here are their profiles:

ESPN Evaluation: Williams has the athleticism and leaping ability to dominate the boards on both ends of the court. Williams attacks the offensive glass and finishes offensive rebounds above the rim with tip-dunks. His leaping ability allows him to grab defensive rebounds out of his area but he does not do this as much as he should. He does not have a great back-to-the-basket post game and needs to improve his touch around the hoop. If he plays as a power forward, he needs to add a jump hook to his game. If he wants to develop into a quality small forward on the next level, he needs to improve his ability to hit jumpers as well as his ball-handling skills. If he does this could develop into a nice inside-outside, frontcourt player, as he seems more comfortable as a power forward than a small forward. Williams also needs to increase his defensive focus and intensity.

There's a bit of a backstory between KSU and Williams; this is not a recruitment that just started to heat up in the last few weeks or months.  For a considerable amount of time last year, KSU was the front runner for Williams' services.  Jeffrey Martin had three blog entries regarding the topic:

What caused the cool down between KSU and Williams?  Obviously, he's a wildly talented young man, and any team would love to have him on their roster.  But it's speculated that the overall concern regarding his recruitment is his inability, thus far, to get qualified.  Originally part of the 2008 class, Latavious spent the last year at the Progressive Christian Academy in Camp Springs, MD to improve his status.  As of this point, we know that he's still not qualified, but that could change as soon as he gets his standardized test scores back.

Currently, the five-star player according to Rivals.com, is ranked as the seventeenth best player in the nation (right ahead of Wally Judge).   His other suitors at the moment appear to be Georgetown, Baylor, Memphis, and Florida State.  The following videos display the two characteristics of Williams' game that stand out the most: his athleticism and ability to finish around the rim.

ESPN Evaluation: This strong and physical guard has an NFL body. He sprints the lane in transition and can get to the rim or spot up for the open three. He is a streaky shooter from behind the arc at best but when his feet are set he can make you pay. Irving can drive both ways but he seems to favor the right side of the floor. He attacks the basket with a baseline drive or mid range pull up if the spot up three is not available. He drives and finishes through contact with ease because of his tremendous strength. If the on ball defender is not in position he will be knocked out of the play. Irving is a great on ball defender that possess excellent lateral foot speed and quickness. He uses his body well to knock weaker players off the ball when they meet body to body and is capable of defending all three perimeter positions. Irving plays with good energy and passion on both ends of the floor.

The first thing that stands out when you read his evaluation is that he has an "NFL body". When you look at the photo evidence you have to agree: 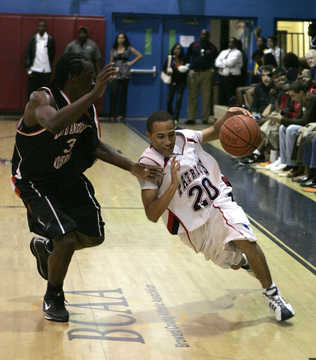 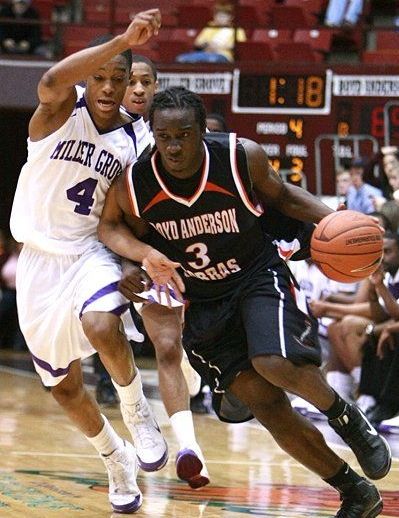 If you're like me, the first thing that comes to mind when you think of Irving is, "Why does KSU need another guard? Shouldn't they replace the forward that just decided to transfer?"  Believe me when I say that I'm fully with you on that.  But when you hear certain buzz words in his evaluation like "strong", "physical", "transition", "energy", and "passion" you think, "Man, this is exactly the kind of player that Frank Martin loves".  Combine that with the fact that he's a native of the Miami area, and you see why there may be mutual interest on both sides.

It seems pretty obvious that KSU is interested in both players, and both would seemingly fit K-State's uptempo style regardless of which Williams does or doesn't end up signing with KSU.  You would assume that KSU is probably holding out for Latavious Williams, but you can never be too sure.  Regardless, one would expect a Williams to sign on the dotted line here in the near future.

As is the ever turbulent world of recruiting turns each passing day, the picture becomes more and more clear about the roster makeup of the 2009-2010 Kansas State Wildcats.  We already know that Wally Judge is going to have an impact, and it's not like Reebok All-American Game Co-MVP Rodney McGruder is going to just bow out gracefully.  Unfortunately, we now know that Ron Anderson will not be a part of the future plans, and his experience will be missed.  But, as is the case with a set of coaches that can recruit their tails off, a silver lining will appear, and the future will still look as bright tomorrow as it did today.

Finally, Ron, thank you for your two years at Kansas State.  We here at BOTC appreciated the hard work and passion you brought to the program the past two seasons.  Good luck wherever you land. and we hope you have nothing but success.