Texans Don't Deal Well With Losing, But We Already Knew That

Share All sharing options for: Texans Don't Deal Well With Losing, But We Already Knew That

This post is only tangentially related to K-State sports and will have some political content. It's not really a partisan issue, though, so I'll try to stay down the middle of the aisle, and I ask that all of you do so as well.

After the recent newspaper whining by the jilted folks who wanted the NBAF lab in San Antonio, it was suggested that the Texas group may file a lawsuit protesting the decision to place the lab in Manhattan, Kan., rather than San Antonio. Today, that lawsuit has become a reality.

First, in the interest of fairness, I have not read the entire 51-page pleading. I read enough to know the basics of the Texas Bio- & Agro-Defense Consortium's (TBAC, although you could make a case that TBAG would be equally appropriate) main arguments. However, as I'm sure you are shocked to hear, I consider this a cosmically stupid lawsuit, and hope that the Federal Claims court tosses TBAG, err, TBAC out of its courtroom forthwith.

TBAG's, dammit, TBAC's primary argument is that Manhattan, Kan., is located in Tornado Alley. As such, they want to make it very, very clear that it is very, very dangerous to have all these killer pathogens stored in a building whose security system will rival Fort Knox. In support of their argument that this is a very dangerous idea, we get the following quote from page 29.

The chart reflects that states in Tornado Alley are more likely than other states to suffer violent tornadoes.

I realize the attorney who wrote this brief is from Washington, D.C., but surely he realizes that Texas is also part of Tornado Alley, right? And yes, I understand that Manhattan is actually part of Tornado Alley, while San Antonio is not, but TBAG's lawyers didn't make such fine distinctions. That is probably not surprising, given that the basis for their arguments came from Texans, who are highly unlikely to know where any other state in the United States is located. 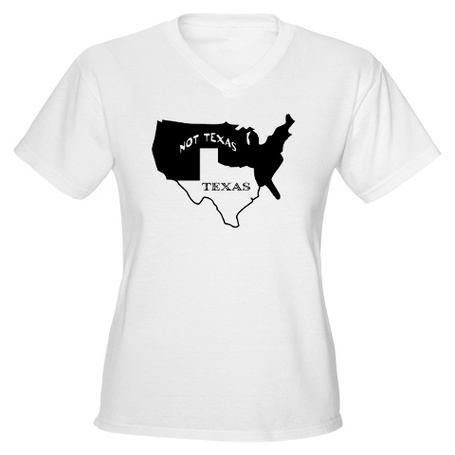 Wait, this map is not drawn to scale?

Another argument made against the Manhattan site is that there were 189 tornadoes in Kansas in 2008, and 141 tornadoes in 2007. Note, those are the figures for the entire 82,277 square miles the state encompasses. Texas suffered 98 tornadoes in 2008, a drastic reduction from the 198 cyclones the state saw in 2007. If we go back another year, which the attorneys for TBAG apparently don't care to do, we find that Texas endured 116 tornadoes in 2006, as compared to 91 for Kansas.

On page 30 of the pleading, we get what is probably the most comical comment I've ever seen in a legal document. In all its glory:

In fact, it is well known (and at the forefront of the public's consciousness due to Hollywood classics such as The Wizard of Oz), Kansas lies in the heart of Tornado Alley and is prone each spring to outbreaks of the most severe tornadoes.

I don't have a punchline. That's the entire joke, right there. I can't improve on it.

Using the magic that is Google Maps, I've determined that Texas Research Park in San Antonio is a mere 169 miles from Texas A&M University. It is a hop, skip, and a jump of only 340 miles from Texas Tech University. Meanwhile, the proposed site for NBAF in Manhattan is close enough to K-State's veterinary school that, if the wind was blowing hard out of the north, I could probably spit on the vet school from the NBAF location. OK, that claim far exceeds my actual spitting ability, but even Mark Mangino could jog from the NBAF location to K-State's vet school, not that we'd want him to try.

Along with the vet school argument, TBAG claims that DHS relied on information that Manhattan was near a medical school, located in Lawrence, whereas every functional citizen of Kansas knows that the KU Med Center is actually in Kansas City, not Lawrence. Somehow, that extra 43 miles from Lawrence to the KU Med Center is a make-or-break deal. They also claim that it is more than two hours from Manhattan to the KU Med Center. I suppose if you drive about 60 miles per hour the whole way it might be, but it usually doesn't take me a full two hours to cover 123 miles when the vast majority of that driving is done on freeways with speed limits of 70 miles per hour. 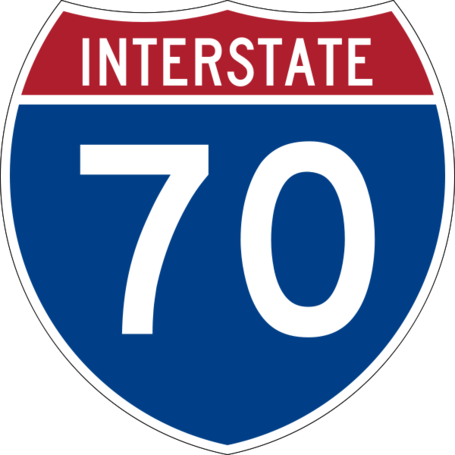 Two political arguments make their way into the TBAG pleading. First, the plaintiff claims that DHS reversed course in March of last year by soliciting financial contributions from each state, with a deadline of March 31, 2008. In its infinite wisdom, the Texas Legislature meets every other year. A state of 22 million people encompassing 268,820 square miles has a legislature that only meets every other year. A word to the wise. If you had a legislature that met every year, your state government might be able to do something other than build nice freeways. But, Goddamn, have you ever driven on a Texas freeway? They are something to behold. 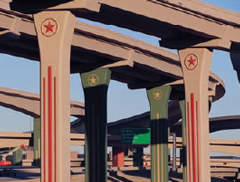 They probably devoted an entire legislative session to this one interchange.

On pages four and five, TBAG also claims that members of DHS improperly met with members of the Kansas consortium trying to land the lab in Manhattan. Because of this, TBAG claims Kansas officials exerted improper political influence. Really? The president of the United States at the time was (drumroll, please)...the former governor of Texas, Mr. George W. Bush himself. And you're complaining that Kansas officials had political influence over this project? Really?!

In a final bit of geographic ignorance, TBAG notes that, in 2007, an F-5 tornado with winds in excess of 260 miles per hour "struck to the southwest of Manhattan, Kansas...literally obliterating the town of Greensburg, Kansas, and killing 11 people." What TBAG does not note, however, is that Greensburg is 232 miles from Manhattan, and is actually closer to Texas (184 miles to Stratford) than it is to Manhattan.

Finally, as I knew they would, TBAG couldn't help but bring up the tornado that hit Manhattan last summer. Of course, San Antonio never has been hit by a tornado. Or not.

It really would be a shame if the whining of these people in Texas ends up delaying the construction of the NBAF lab in Manhattan, because we know the lab will be vitally important to the growth of the area in the future. Of course, if the court proceedings take a turn for the worse for the good guys, I know what would solve this problem in our favor.

If you secede, the United States isn't going to put its multimillion dollar laboratory in your country, dumbfucks.