Adventures of the Big 12: Spring Break

Share All sharing options for: Adventures of the Big 12: Spring Break 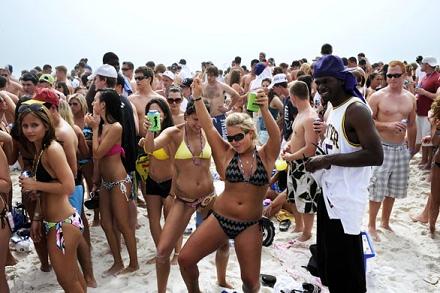 The boys are back, and this time they're looking to unwind in the Florida sun. Sure, some of the schools are already hot and heavy into Spring Practice, but that doesn't mean the schools can't spare a little time to engage in some drunken debauchery.

Just to warn you, the following post contains foul language, numerous references to alcohol and drugs, and there's even a scene where a girl takes her shirt off.

In short, it's authentic Spring Break. If any of those things insult you, please feel free to not click the jump. Otherwise, follow along and join the fun in the next chapter of the "Adventures of the Big 12".

It's a sunny day in Daytona Beach, Florida. (Mostly) Nubile young men and women are consorting amongst one another as they frolic in the Florida sunshine. Concerts, drinking binges, and wet t-shirt contests are usually on the daily itinerary.

Our friends, the members of the Big 12, have decided to take a break from the end of the season and Spring practices to have a little fun in the sun. Let's see what they're up to right now...

Nebraska: What in the Hell has gotten into him?

Missouri: Jack Daniels. A fifth of it to be exact.

Nebraska: Shouldn't someone cut him off?

Missouri: Naaa. He's had a rough year. I figured he may as well let loose.

Nebraska: Well, he's letting loose right now, and it looks like it's in Kansas' beer.

(Kansas State is openly urinating in a red plastic cup with "Kansas" written on the side with a Sharpie.)

Nebraska: Apparently, it's that I shouldn't get on his bad side and leave my beer unattended.

Nebraska: Where is Kansas anyway? I haven't seen him since we got to the beach.

Missouri: Oklahoma threatened to beat him up when he took off his Adidas pants and all that was there was a pink Speedo that had, "Boy Toy" in block letters across his ass. So, he stormed off and muttered something about a guy named Blaine.

Nebraska: He's not very subtle is he?

Missouri: He claims that he's "living out loud".

(Colorado stumbles over from visiting a group of dreadlocked young men sitting on some towels a few hundred yards away...)

Nebraska: Where have you been?

Missouri: Seriously, where have you been?

Oklahoma: Look here you Goddamn hippie. If we go to another club and get kicked out because you're holding, I'm going to choke you with that piece of shit tye-dye Bob Marley t-shirt you've been wearing for the past three days.

Oklahoma: No, man, it's not cool. And take a shower. You smell like hangover shits.

Missouri: I second that.

Nebraska: I third that.

(Kansas State starts to urinate on Colorado's leg. Colorado just looks off into the distance with a very confused stare...)

Colorado: Dudes. Is it raining?

(Missouri and Nebraska snicker. In the distance, Oklahoma State and Texas Tech are wandering across the beach in search of a date...)

Oklahoma State: Man, I can't believe that nones these fly honeys wants to get a piece of my action.

Texas Tech: Does anyone other than Samuel L. Jackson wear Kangol hats?

Oklahoma State: Man, sure they do. That's what the guy at Lids told me, and I know he can't be wrong. He said that these shutter shades are the bomb, yo.

Texas Tech: You realize that you look like you're retarded, right?

Texas Tech: Do you even know what you're saying?

Oklahoma State: Man, you watch. All of the women will be on my shizzle before you know it.

Texas Tech: At the rate you're going, I figure you'd have better luck trying the "Dick in the Box".

Oklahoma State: How does that work?

Texas Tech: Use your imagination.

Random Girl: Hey, it's the Hamburgular!

(Meanwhile, Baylor has made his way to a wet t-shirt contest to preach the gospel...)

Baylor: Repent! Repent all ye who revel in the pleasures of the flesh!

Baylor: No, I won't, but if you don't repent and commit your life to Jesus, you certainly will be!

Random Shirtless Girl: If God didn't want me to take off my shirt, he wouldn't have given me these!

(Baylor wanders aimlessly for a few minutes while he allows the image of the first naked woman he's ever seen to burn into his brain. He ultimately comes out of his stupor to find himself in a gay bar...)

Baylor: What the Hell? Where am I? Who are all of these people, and why are they all wearing sailor outfits? Has a Royal Caribbean ship docked or something? Good sir, can I ask you where I am?

(A man in a hot pink Speedo turns around...)

Kansas: Ah, Hell.  Busted.  Blaine, can you get me another Zima?

(At that moment, Kansas State, Missouri, Nebraska, and Oklahoma have moved down to the shoreline because a very large yacht has started to sail by, and it's caught their attention...)

Oklahoma: Would you look at that thing? Some big shot has to own a boat that big. Maybe a superstar like Toby Keith.

Missouri: For the love of Christ. Get off of Toby Keith. Nobody likes the guy, and his line of restaurants suck ass.

Oklahoma: You take that back!

Missouri: No, I won't take that back. His restaurants suck, his music sucks, and no one seems willing to tell him that those cowboy hats he wears are for women. The only dude that can pull those off is Bret Michaels, and that's because he's a tranny.

Nebraska: Bret Michaels is not a tranny.

Missouri: Could have fooled me.

Kansas State: Anyone got more beer? I'm out...

(The yacht slowly moves by, and a familiar voice shouts down from the boat's stern...)

Missouri: Why didn't you tell us that you had that thing? We could have been sailing around on that all day while the rest of those weirdos do whatever the Hell it is they do.

Texas: Precisely. I needed to lay low while the riff-raff wandered off. You guys want on board?

Kansas State: Got any beer?

Texas: Sure! I have all kinds of Shiner Bock...

Kansas State: Whatever, I'm in. Dock that bitch, and I'll climb aboard.

Nebraska: Count me in.

Oklahoma: Oh, why not?

(The guys climb aboard the yacht. Meanwhile, Iowa State sits at the Orlando airport...)

Iowa State: Why do I even bother? Sure, "We'll give you a ride," they say. "We won't forget this time," they say. Assholes.

(On the yacht, Texas and the guys have some beers while the traveling Hooters Calendar girls splash each other in the pool...)

Missouri: I get this sinking feeling that we forgot something...

Nebraska: Hmm. Me too. Did we forget anything?

Texas: Oh, him. I gave him a jet ski and told him to have at it. Last year, when we went down to Cancun, I gave him one and he ended up in South Padre. It worked out for everyone. I figured that we'd just swing by Miami on the way back. He'll probably be down there somewhere.

(Texas A&M is on his jet ski somewhere south of Miami. He encounters some folks on a raft...)

Man on the Raft: Hola! Ayúdenos!