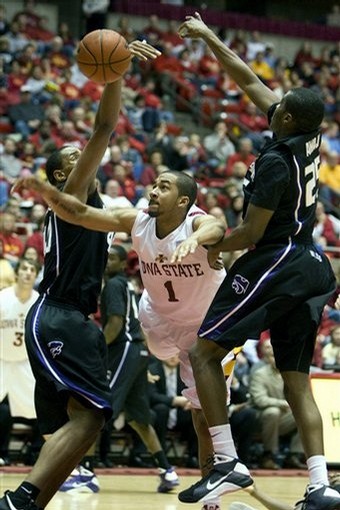 This picture is a metaphor for how ugly this game was.

Yesterday, Kansas State beat Iowa State in Ames 50-46.  Sparked by the bench (which scored twenty-four of the Wildcats' fifty points) performances of Jamar Samuels and Buchi Awaji, K-State was able to overcome a horrible shooting performance and that old "Hilton Magic" that seems to trip up many a visitor.

Oh, and that Craig Brackins guy nearly had a double-double with twenty-four points and nine rebounds.  But, hey, what are you going to do?

Despite the Godawful shooting (26.7% in the first half; 33.3% overall), KSU was able to stay close due to tough defense and crashing the boards.  ISU was held to 30.2% shooting from the field, and KSU outrebounded the home team 39-37.  Given that neither team could hit the broad side of a barn, it was KSU's balanced attack and deep bench that won the day.

...Jamar Samuels.  He busted out of his mini-slump by recording the first double-double of his career (13 points, 10 rebounds).  Also, his two steals and two blocks (both sick by the way) allowed him to have the well-rounded performance needed to help weather the Craig Brackins storm headed straight down Cyclone Alley.  On a day when we needed someone to step up, Jamar answered the call.

...Darren Kent's unbelievable toughness.  While his eight points and six boards weren't eye-popping, it was his tough as nails defense of Craig Brackins that won the day for KSU.  For the first fourteen minutes of the first half, Brackins went to town on Luis Colon, outscoring KSU by himself 16-12.  Once Martin made the swtich to have Kent guard the rangy big man, Brackins went 3-14 from the field and only managed to score eight more points for the remaining twenty six minutes.

Oh, did I mention that he did all of this, AND he broke his nose?

...Buchi Awaji stepping up big and giving K-State a lift.  He only averages a shade over ten minutes and three points a game, but Awaji hit a huge three pointer at the end of the first half to turn an eight point defecit into a two possession game.  By the end of the game, he had seven points and two boards.  Not bad production for a guy who has only played in six of the Wildcats' twelve conference games.

...winning yet another road game in conference play.  By winning in Ames, KSU won their fourth consecutive conference road game for the first time since the 1979-1980 season.  While the last four wins haven't come against top teir competition, it's not something the Bob Huggins or Michael Beasley lead squads can claim.  KSU has also won seven out of their last eight conference matchups, and eight out of their last ten games.

Not bad for a team that was left for dead exactly one month ago when the Wildcats were beaten by Baylor at home.

...the shooting.  Dear God, the shooting.  While K-State rallied to shoot 41.7% in the second half, it was far from their best performance.  In the first half, I can't count how many near point blank shots KSU missed.  It didn't matter if it was Kent shooting a turnaround jump hook, Colon trying to dump in a bunny, or one of the guards trying to slash into the lane and score on a drive, there seemed to be an invisible bubble over the rim.  If KSU wants to stay on the NCAA tournament bubble, they can't afford to shoot like this against any of their remaining opponents.

Well, I take that back.  They can shoot like this and beat Colorado.  They really suck.

...the first half defense against Craig Brackins.  While Kent was able to hold Brackins in check for over half of the game, for the majority of the first half, KSU was able to let the Cyclone big man beat them single handedly.  Of the Cyclones twenty-four first half points, Brackins had eighteen of them.  Most of those points came against the tandem of Luis Colon and Ron Anderson.  Now, don't get me wrong, I don't think they did a bad job per se, but to see how helpless those two were against a player of his calibur was unsettling.  They did everything in their power to prevent Brackins from scoring, but when Colon or Anderson are on their man eighteen feet away from the basket, bad things are going to happen.  Kudos to Frank and staff for recognizing this and changing things up, but if KSU wants to win at Missouri, or make a serious run to get into the tournament, they're going to have to find a way to rectify these kinds of mismatches earlier in the game.

...can someone page Dom Sutton and find out where in the Hell he's been hiding?  Sure, he hit the front end of a one-and-one at the end of the game to put it away, but that was his only point of the game.  Against Kansas, his airball in the first half kind of sparked the Jayhawk comeback, and in conference play, he's only scored in double figures three times, and they've all come against the cellar dwellers (Iowa St., Baylor, and Texas Tech...all home games).  If KSU is going to make a run at this, Dom's gotta step up.  His defense is what keeps him in the starting lineup, but when the guards aren't scoring, he needs to produce.  With Awaji starting to find his stroke, and the ever dangerous Fred Brown patrolling the perimeter, KSU may need to go small in the stretch run to get some point production if Sutton can't generate some offense.

What it means and where we're going...

Well, this means one thing; the chances of going dancing are still alive.  Granted, they are on life support, but they've still got a heartbeat.  Four straight conference wins are great for this team, and the win in Ames almost guarantees KSU a .500 conference season and an upper-half finish.  Not bad considering where this team was a month ago.  The fact that KSU has a chance to finish in fourth or fifth place is great considering that the media predicted an eigth place finish for Frank Martin's squad.

Obviously, the game this week against Missouri is huge for KSU's chances.  The tenth ranked Tigers are on a roll, and they're surely looking for payback against a KSU team that popped them in the mouth a few weeks ago in Manhattan.  A win against Mizzou means a season sweep, and it will be a big boost to the Cats RPI and tournament chances.  A win on the road against the Tigers is the kind of win that would put KSU on the right side of the bubble, and back into consideration for an at-large spot in the dance.

Of course, there's always the potential for KSU to finish third in the conference standings.  After MU, KSU has Nebraska and Colorado at home, and those games sandwich a trip to Stillwater to face Oklahoma State.  Should KSU get past MU, they have an outside shot at running the table, and an 11-5 finish could secure them a third place conference finish considering that MU still has games at KU, Oklahoma (at home), and in College Station versus Texas A&M.  Even though Missouri is 10-2 in conference, a loss against KSU could be the tiebreaker if they lose to both OU and KU.

While we can postulate the possible outcomes of the season (and I already have), it's safe to say that KSU just needs to keep winning.  Beating ISU on the road is a promising start to what will hopefully become another winning streak to finish out the year.