Share All sharing options for: Big 12 Commish Adds Warning About Hydration With Tom Osborne Back in the Conference 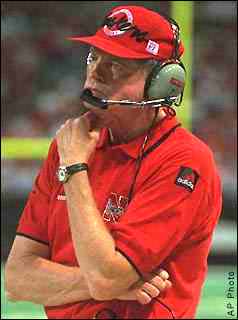 Tom Osborne: The black-hole where his personality should be can be a hazard to your health.

The investigative journalism arm of Bring On The Cats has stretched forth and reaped a reward.

In the wake of a recent memo regarding Bill Snyder's re-hiring at K-State, Big 12 commissioner Dan Beebe sent an addendum to Big 12 media members regarding Tom Osborne's hiring as Nebraska's athletic director in December 2007.

The addendum was short and to the point. It stated:

"A major oversight from the previous memo needs to be corrected.  The Big 12 would like to remind media members that they need to be more conscious of hydration now that former Nebraska coach Tom Osborne is back with the Huskers. We don’t need a recurrence of the incidents that occurred repeatedly during Osborne's 25-year coaching career, particularly on December 30th, 1996 ."

Beebe’s mention of an ‘incident’ is none other than the brief hospitalization of Kansas City Star reporter Joe Posnanski. Posnanski was hospitalized on the night of December 30th, 1996, shortly after an Orange Bowl press conference, during which he spent over an hour and a half talking with Tom Osborne. Hospital records indicated that Posnanski had been admitted because of appendicits, but in speaking with an intensive care nurse who was on staff that night we got a slightly different story.

Joe Posnanski.  No word on whether Osborne's dullness caused his male pattern baldness, too.

"He looked like a mummy" stated a nurse who spoke on condition of anonymity. "It took all night on IV’s before he stopped looking like a corpse. After we found out that he’d spent nearly two hours in close proximity to Tom, we realized the seriousness of the injury. That poor, poor man. He recovered, but he still looks a little funny to me."

As a result of the dehydration incident, the Big 12 began monitoring closely the amount of time people spent around Osborne and made Gatorade and Fiji water readily available at any event he attended. Beebe said the conference will continue that practice with Osborne back on staff at Nebraska in order to avoid a potential lawsuit should Osborne's "personality" drain the life out of some unsuspecting media member.