Your Annual DeArmond W(h)ine Party Is Back

Share All sharing options for: Your Annual DeArmond W(h)ine Party Is Back

Last year, it was Mike DeArmond whining that Michael Beasley and Bill Walker, uhh, whine too much.  I'll be sure to forward that message to the two of them, but it will probably be a while before they get back to you, what with Beasley counting his millions and Walker busting his ass to make an impression with the Boston Celtics.

This year, Gabe DeArmond of PowerMizzou kept a sort of a live blog going during last night's game.  Now that is something that just shouldn't go together.  A DeArmond, already lacking in a brain-to-mouth filter, partakes in an activity that elicits instantaneous, uncontemplated response?  Yeah, this should be fun.

I am bracing myself for the boos already. Seriously, if you have never been to a game in Bramlage Coliseum, you may not understand that Kansas State basketball fans boo more than any other single sport fan base I have ever seen. The crazy thing is, it doesn't extend to K-State football fans. They seem about normal. K-State basketball fans boo every time an official moves, whether it favors the Wildcats or not.

He actually starts with a fair with which I agree.  Our fans, especially the students, boo too much.  Reserve your booing for the calls that are truly bad.  It makes the booing much more effective than when every single call gets the same treatment.

FAR from a full house 17 minutes from tipoff. Actually, far from a half-full house outside of the student section.

If anyone should know what an empty house looks like, it would definitely be a Missouri fan and/or beat writer (current average home attendance: 7,802, and I guarantee you that's paid attendance, not actual attendance).  To be fair, he later pointed out that Bramlage filled up nicely. 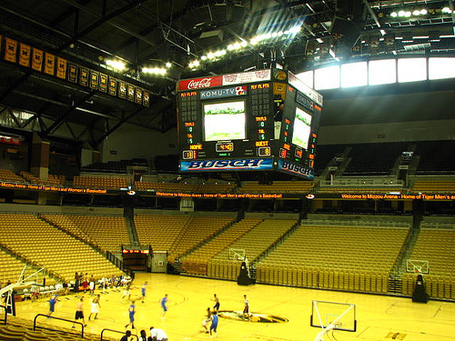 I am 32 years old. Willie the Wildcat still scares the living daylights out of me. Mascots should either wear full mascot uniforms, or they should be real people. Not both. Just saying.

Good, we don't want you to like our mascot.  Also, did Truman the Tiger get punched in the face repeatedly, or hit by a car, or what?  He has the flattest Tiger face I've ever seen. 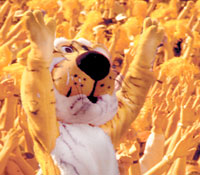 Truman, after the car wreck and unsuccessful plastic surgery.

Cats win the tip, Sutton controls. Now that the cheerleaders have sat down, I can mostly see.

He didn't enjoy the view of the cheerleaders.  Not that there's anything wrong with that.

Oh my. Samuels just threw in a complete prayer. And got fouled by Safford. Sometimes, you just get a feeling it's not your night. I have that feeling right now.

Game getting to Missouri's pace now. Lyons misses the jumper. That's okay, speed the game up. It will favor Missouri eventually.

Near turnover. Cat fans boo that it wasn't one. This is hideously irritating.

On second thought, if our booing irritates opposing fans, players and writers, I'm all for it.

Ten to shoot. Ramsey drives. Charge. It's been that way all night. They've called about one block. The rest have been charges.

Good.  One of Mizzou's "40 minutes of something" strategies is to drive to the hoop with reckless abandon, forcing opponents to take a charge or try to block the shot.  I like it when officials step up and call charges on out-of-control drives.

KSU's last 12 points have come on four threes. They are 8-15 from deep. You can't defend that. Missouri has been bad, but I honestly believe this has more to do with the KSU team that we all thought could show up finally did.

Colon drives and scores. Never, ever, ever against a Division One defense should Luis Colon be able to do that.