Share All sharing options for: Meaningless "SportsCenter" Statistic: Josh Freeman on the Tube 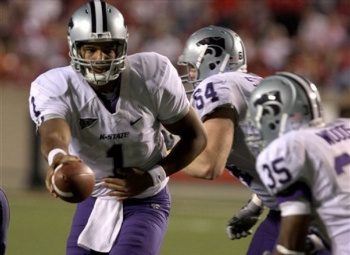 Before the Louisville game, I compiled some statistics about Ron Prince and his record in games starting after 6 PM.  During my ‘research' I found that he was a solid 0-4 when playing teams on the road with a start time of 6 PM and later.  While I didn't think it amounted to much at the time, the trend seemed to continue with the loss at Papa John's Stadium.

So, with that in mind, I tried to find another statistic to look at before the big game against Texas Tech this weekend, and I decided to focus on the man that makes this team go, Josh Freeman.

During Freeman's 2.33 seasons at Kansas State, he's started twenty games.  Of those twenty games, fourteen have been televised.  Since this week's game will be shown on ABC, I wanted to take a look at his performance during televised games.

Here are the numbers:

All in all, that's not bad.  The interceptions are pretty high, but he's throwing more TD's than picks, which is a good thing.  In the past two seasons, he's throwing 3 TD's to 2 INT's, so that's progress.

Now, if you focus on home vs. road games, his numbers differ a bit:

If you look at the breakdown, when Josh is in the friendly confines of Bill Snyder Family Stadium, his completion percentage is four percentage points higher, he throws for ten more yards per game, and his TD/INT ratio is nearly 80% higher.  You'd expect this, but it's still good to see confirmation.

So, if you're looking for a ray of hope this weekend, Wildcat fans, look no further than the fact that Josh plays better at home when the ‘Cats are on television.   At least we have that going for us.